Grapevine: ‘I love you’ in Hebrew

At this year’s awards Charles Randolph, who received an Oscar as co-writer of the screen adaptation of The Big Short, said in heavily American-accented Hebrew,“Ani ohev otach, Mili.” 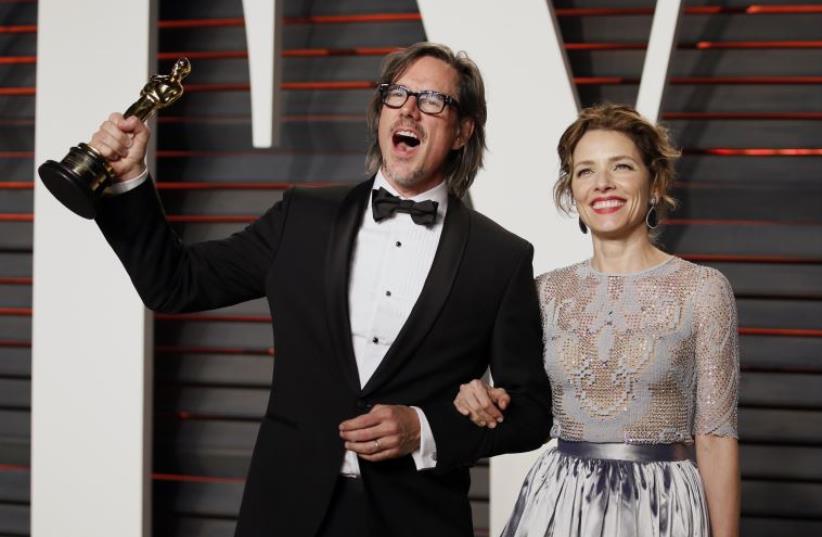 Writer Charles Randolph holds up his Oscar for Best Adapted Screenplay for "The Big Short" as he and his wife Mili Avital arrive at the Vanity Fair Oscar Party in Beverly Hills, California February 29, 2016
(photo credit: REUTERS)
Advertisement
■ SOMEHOW THERE’S almost invariably an Israeli or Jewish component or both in the annual Academy Awards, which is not surprising, considering how many Israeli expats in the entertainment industry live in either Los Angeles or New York, and how many Jewish people are involved in Hollywood productions. At this year’s awards Charles Randolph, who received an Oscar as co-writer of the screen adaptation of The Big Short, said in heavily American-accented Hebrew,“Ani ohev otach, Mili” (I love you, Mili).Randolph is married to prizewinning actress Mili Avital, who was born in Jerusalem, raised in Tel Aviv and Ra’anana, attended the Thelma Yellin High School of the Arts in Givatayim and has acted on stage, in films and television in both Israel and America.She has been living in New York since 1993 and has returned periodically to Israel to work in various productions. She was the female star of Hatufim (Prisoners of War) on which the highly ranked American series Homeland is based.■ GETTING IN early for the celebration of International Women’s Day, the Zionist Union attracted Labor Party and Hatnua members from all over the country to the Viola convention and events center in Holon – and surprisingly, more than a third of the participants were men. It would not have been a surprise to see male MKs, but so many other male feminists was a real eye-opener.Lea Fadida, the deputy mayor of Yokne’am, who organized the festivities, said that when she had been pregnant with her daughter, she had spoken to her bulging stomach, promising: “By the time you grow up, we won’t have to fight for women’s rights any more.” Her daughter is now 18. While acknowledging that much has been achieved in that period, Fadida said that the struggle for equal gender representation continues, as does the battle for equal pay for equal work. Fadida was 27th on the Zionist Union list for the last Knesset elections, but the combined Labor-Hatnua list was able to muster only 24 seats.■ ONE OF the first of the 613 biblical commandments is “Be fruitful and multiply.”Many people who might want to obey this commandment are prevented from doing so due to infertility or genetic problems. In many cases, what looks like a hopeless situation becomes reversed through in vitro fertilization, meaning that the woman’s egg is fertilized outside the body.A special unit for this purpose was set up two years ago at the Medical Center of the Galilee Nahariya, which on March 8 will celebrate its second anniversary and 50th in vitro baby in the presence of Health Minister Ya’acov Litzman; the hospital’s director-general, Dr. Massad Barhoum; Prof. Yaakov Borenstein, who heads the center’s gynecological and neonatal department; and Dr. Natan Levit, the head of the IVF department. The festivities will include lectures on new fertility treatments outside the body; women’s medicine in the modern era; and treating male infertility.It is no coincidence that the event is to take place on March 8, which is International Women’s Day. Whether in vitro or naturally, babies are still borne by and born to women. With all the progress of medical science, men cannot yet give birth.■ HAIFA MAYOR Yona Yahav is fortunate that the municipal elections are still a couple of years away. If they were held now, he would lose brownie points for his negative attitude toward youth at risk. Yahav was recorded in a shouting match in which he absolutely refused to permit the relocation of a hostel for homeless youth.The hostel is located in the most unsavory part of the Hadar neighborhood where the youngsters can become victims of criminal influences. Otot, the nonprofit organization that cares for them, was given access to larger premises in a much better neighborhood in the center of the Carmel, but Yahav is adamantly opposed and says they can go to Kiryat Ata or elsewhere, but not under any circumstances to the Carmel, which is intended for kindergartens and schools and not for hostels for wayward youth.Assaf Shmul, one of the administrators of the hostel, says that if it moved to the Carmel, it would serve a much larger segment of youth at risk in the north of the country, because it would be much more accessible than it is now. He is concerned about the increase in the number of homeless youth and wants to give them the possibility of having a roof over their heads.■ TEL AVIV’s Young Internationals will host an Israeli Virtual Reality Film Festival on Art and Technology in Storytelling: Virtual, Immersive and Interactive, at the Center for Contemporary Art, 5 Kalischer Street, Tel Aviv, today from 10 a.m. to 12 noon. The event will include a private tour and panel discussion.Storytelling is usually thought of as a traditional, spoken narrative passed from generation to generation. But thanks to digital innovation, storytelling is becoming a full-body interactive experience. A panel of artists and technologists will discuss animated storytelling in virtual reality. Afterward, the festival’s director, Adi Lavy, and head of live events, Danielle Angel, will conduct a guided tour that will introduce participants to new cinematic and technological developments, how they change the medium and the new cinematic language that has been evolving in the past decade.