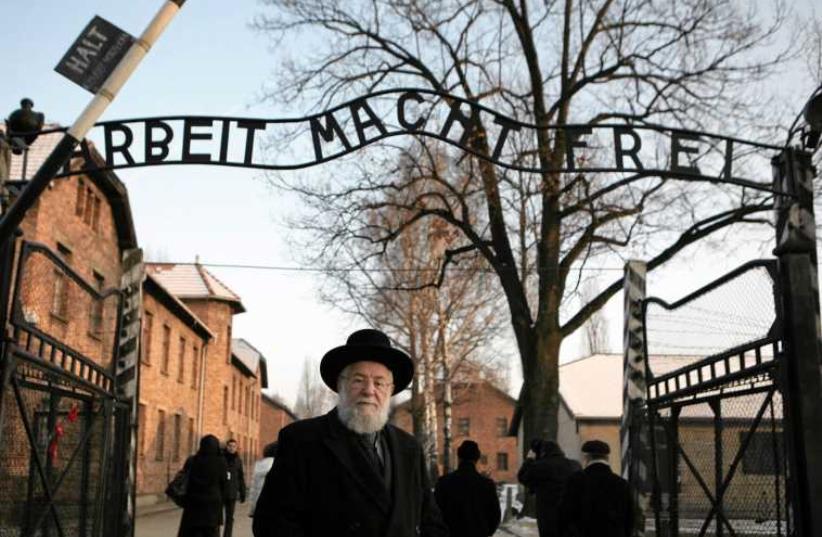 Rabbi Yisrael Meir Lau stands at the gates of Auschwitz.
(photo credit: REUTERS/MICHAL LEPECKI)
Advertisement
■ THE DIGITAL Life Design Innovation Festival is to take place in Tel Aviv’s Hatahana on September 27-28 and will be attended by hundreds if not thousands of people, many of them entrepreneurs who are bringing new ideas and new products to the marketplace.There are to be numerous DLD events in other venues, one of which, called “Making a Change: Innovators for Accessibility,” is to be held on Tuesday, September 27 at Tailor Made, 99 Allenby Street, from 7 p.m. to 9 p.m.Accessibility is currently the buzzword in Israel, more so during the Paralympics in Brazil, where the Israeli team is trying so valiantly to bring medals home. The manner in which they have overcome physical and psychological challenges is nothing short of remarkable and they are an everyday inspiration.But while the Paralympic season is their time for recognition, for the next three-and-a-half years accessibility will be placed on the back burner – unless Israeli creativity comes up with some fantastic solution that will benefit not only Israelis but people all over the world whose physical disabilities prevent them from climbing stairs or reaching door handles that are too high and windows that are way above their heads, if they are confined to wheelchairs. Ramps can be built in existing buildings and doorways can be widened to accommodate wheelchairs, but a whole building can’t be torn down just because it has a winding narrow staircase and no elevator.The Tel Aviv Cinematheque has a marvelous method of raising a platform to the level of the stage for the benefit of people with very limited mobility. Even so, for some people who’ve never quite come to terms with their condition, this could be embarrassing.“Making a Change: Innovators for Accessibility” is being hosted by the Sofaer IMBA program in entrepreneurship & innovation at Tel Aviv University, Tikkun Olam Makers (TOM) at the Reut Group, the Tel Aviv Municipal Department for Immigration and Absorption, and Tel Aviv Global.Speakers will be Sefi Udi, who will explain how TOM helps people with disabilities to develop open-source technological solutions to their everyday challenges; Dr. Iris Ginzburg, head of the Sofaer IMBA program, and Rebecca Fuhrman, TOM’s architect of inspiration.
■ AMONG THE speakers at a tribute evening at the Tel Aviv Cinematheque last week in honor of veteran journalist and Holocaust survivor Noah Klieger was Tel Aviv Chief Rabbi and former chief rabbi of Israel Yisrael Meir Lau, who despite the fact that the date coincided with the 30th yahrzeit of his father-in-law, former Tel Aviv chief Rabbi Yitzhak Yedidia Frenkel, he felt that he had to honor Klieger, with whom he had participated in the March of the Living for 28 years.It is hard to tell which of the two is the better-known Holocaust survivor, though each in his own way is dedicated to preserving the memory of the Holocaust and ensuring that it is not forgotten by the next generation.Lau, who frequently appears on radio and television, related that some 50 years ago, he caught a taxi somewhere in the vicinity of the Tel Aviv Great Synagogue and the taxi driver recognized his voice from having heard it on the radio. The taxi driver was very emotional and explained that he had lost both parents in the Holocaust, a painful thing that he had to live with daily, but what pained him even more was that his young son had asked him if he was a bastard.“Why are you asking me such a question?” he had retorted to his son. The reply was very simple. The word had come up in class. The teacher had been asked to explain it, and not wishing to go into the full definition, she had diluted it by saying that it was someone who didn’t know his parentage. Even so, the taxi driver couldn’t understand what had prompted his son to ask him if he was a bastard. The son said that on his mother’s side he had grandparents whom he knew and who gave him gifts. But on his father’s side there was nobody.“Don’t you have even one photograph of your parents?” Lau asked the taxi driver. The man admitted that someone had given him a photograph of his parents when they were in kindergarten. They were the same age and had been in kindergarten together.“Blow it up and hang it in a prominent place in your home,” Lau instructed. “Then you can tell your son that you’re not a bastard and you can show him what your parents looked like as children.”
Advertisement
Subscribe for our daily newsletter