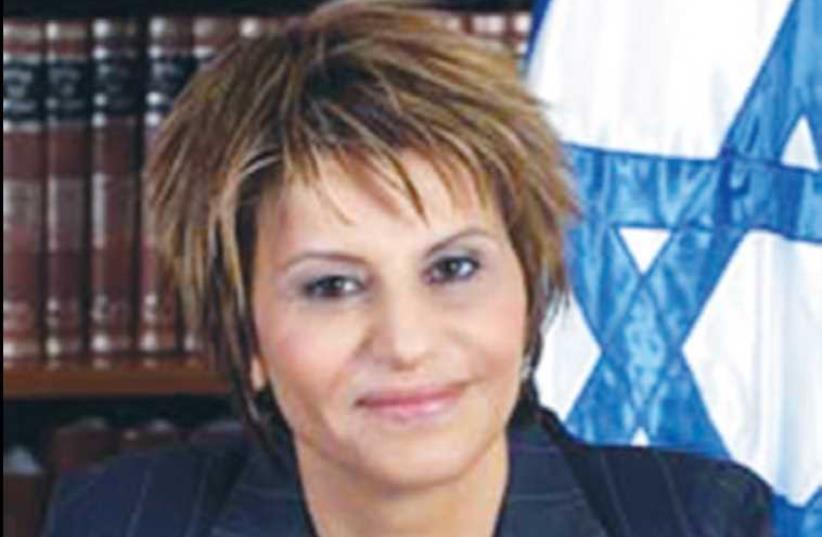 DALIA ITZIK.
(photo credit: KNESSET)
Advertisement
■ FOLLOWING ITS successful gala fund-raiser at the Rabin Center in mid-September, Hadassah International, headed by former Knesset speaker Dalia Itzik, is having another gala event in Tel Aviv on December 3 with popular hassidic singer Avraham Fried. All the proceeds of the previous event went to cancer research, and in the improvement of quality of life for cancer patients and their families. The Avraham Fried event to be held on December 3 at the Smolarz Auditorium on the campus of Tel Aviv University, will be dedicated to Israel’s soldiers with love. Also appearing on the program will be Ishay Ribo.Fried has a huge number of religiously observant fans around the country, and because the concert begins at 8.30 p.m. on Saturday night at a time of year when Shabbat concludes very early in the evening, it means that fans from just about anywhere in Israel will be able to attend. Even before that, during the intermediate days of Succot on Thursday, October 20, Fried will be singing in the somewhat larger premises of the Jerusalem International Convention Center on behalf of United Hatzalah. He’s obviously on a life-saving mission. In Jerusalem he will be joined by celebrity cantors, wellknown on the international circuit – Yitzchak Meir Helfgot and Lipa Schmeltzer.It’s an interesting hassidic combination with Fried the Chabad Hassid, Helfgot the Ger Hassid and Schmeltzer the ex-Skver Hassid. Schmeltzer is the son of a Holocaust survivor who was one of the 1,684 Jews who were able to leave Nazi-occupied Hungary on the famed Kastner train, but who spent time in Bergen-Belsen.The severity of the Skver life-style was not conducive to Schmeltzer’s career ambitions, so he left and set up the non-judgmental Airmont Synagogue, but in his personal life remains strictly Orthodox.
■ THE DIPLOMATIC community sometimes has to postpone or bring forward its national day celebrations because the actual dates clash with Jewish holy days.Yun-sheng Chi, who heads the Taipei Economic and Culture Office in Tel Aviv – which in the absence of full diplomatic relations between Taiwan and Israel, functions as closely as possible to an embassy – is cutting it fine, and hosting his country’s National Day reception on the night before Yom Kippur.
■ SEGREGATION IN Tel Aviv’s Rabin Square? Sounds implausible in what has become the symbolic seat of democracy in the White City? Guess again. According to a report in Haaretz, there were to be no women among the performers at a pre-Yom Kippur concert which had been approved by Tel Aviv City Hall, but which had refrained from sponsoring it.The concert was organized and produced by singer Assaf Amdursky, who told Haaretz that he didn’t choose the performers, who had already been selected when he came on board. The person funding the concert is religious and has his particular considerations, which Amdursky said he respects.“I work with all sectors, including religious, secular and gay people, as well as the Arab minority. I don’t wish to dictate to others how they want to do things, I just want to do it in style,” he said. He refused to say what he thought about the exclusion of women from such a large event taking place in a public square.The Histadrut labor federation had also been among the sponsors, and on learning that women would not be permitted to sing withdrew its sponsorship and initiated the cancellation of the concert. The event will now be a pre-Yom Kippur mega-study session.