On August 1, there will be a premier of the documentary In the Paths of Jewish Lithuania, at the Hibba Center, on Herzog Street near the Jerusalem Botanical Gardens. 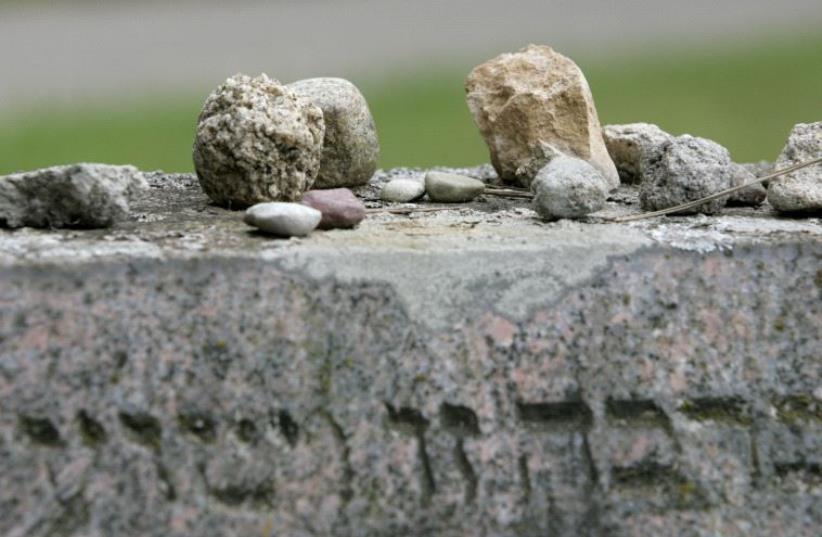 Stones lie on a tombstone in a Jewish cemetery in Vilnius August 7, 2007
(photo credit: REUTERS)
Advertisement
■ VILNIUS, THE capital of Lithuania, was once known as the Jerusalem of the north, and in the annals of Judaism is referred to as Vilna. This is where Eliahu Ben Shlomo Zalman, better known as the Vilna Gaon, held sway and persuaded many of his followers – including his relatives – to migrate to the Land of Israel, even though he himself did not do so and is buried in Vilnius. Descendants of the Vilna Gaon and his disciples include the Rivlin and Netanyahu families.On August 1, there will be a premier of the documentary In the Paths of Jewish Lithuania, at the Hibba Center, on Herzog Street near the Jerusalem Botanical Gardens. The film will be followed by a panel discussion moderated by well-known radio and television personality Shaul Meisels, a broadcaster who focuses on religious and Jewish folklore topics and who produced and directed the film. Participants will include Supreme Court Justice Elyakim Rubinstein, Prof. Zehavit Gross, Israel Rosenson and Akiva Sela. Reservations can be made at (02) 679-0011.The film is one of a series of events during the three-week mourning period between 17 Tamuz and Tisha Be’av. With this in mind, there will be a lecture on August 4 on “The Love of Israel (as a people) and Living Together” to be delivered by Rabbi Duki Ben Artzi, followed by a lecture on A Time to Love in Israel by Bat Galim Shaer, the mother of Gil-Ad Shaer, one of the three yeshiva students abducted and murdered by terrorists two years ago.In the interim the unity surrounding the fate of the three boys has to some extent disintegrated, and Sha’ar would like to see it restored. The final lecture in the series on August 11 will naturally be devoted to “The Temple Mount – the realities and the untenable” by Nadav Shragai, journalist, author and a researcher at the Jerusalem Center for Public Affairs. This will be followed by a lecture by Rabbi Menachem Makover on “The Temple Mount in our Times – a Vision or a Dream.” All the above events begin at 8:15 p.m.■ THE ANNUAL Israel Medical Conference will take place at the Jerusalem International Convention Center on Tuesday, August 16 in the presence of Mayor Nir Barkat and President Reuven Rivlin. Registration is through the Hadassah Medical Center www.hadassah.org.il or (02) 531-5832. Under the heading of 360º of Health, conference participants will discuss specific health issues, technological innovations in medical therapies, the importance of transparency in medical treatments, when and when not to prescribe antibiotics, new techniques in surgery and a topic no less intriguing for lay people than for medical professionals: the relationship between nutrition of the body and health of the soul. Health Minister Rabbi Ya’acov Litzman will present his vision of overall improvements in Israel’s medical services in 2017.■ IT’S HARD to believe that Khutsot Hayotzer, the annual Jerusalem Arts and Crafts Fair will begin its fifth decade on August 15 at the Mitchell Gardens facing the walls of the Old City. The fair will continue till August 27. Originally an outlet for Israeli exponents of arts and crafts, including artisans from minority communities, the fair gradually grew into a huge international event with leading artists from around the globe performing and exhibiting their works, as well as demonstrating the artistic traditions of their countries.Painters, sculptors and jewelers, along with designers of unique fashions and accessories will show off their creativity. Countries represented at the fair include those of Central and South America, Asia, Europe and Africa. Entry to the fairgrounds is from 6 each evening (except Friday; Saturday from 9 p.m.), with mega performances in the Sultan’s Pool, and performances on a smaller scale in the actual fairgrounds. The big concerts in the Sultan’s Pool begin at 9. Performers include Shalom Hanoch with Shlomi Shabbat, Hadag Nahash with Dudu Tassa, Omer Adam with Liran Danino, Mooki with Static and Ben-El Taboori, Eviatar Banai, Moshe Peretz with Agam Bohbot, Dani Gid and Friends with Efraim Shamir, Rita with Harel Skaat, Peer Tasi with Eden Ben Zaken, and Aviv Gefen, who will be the performer on the closing night.