Grapevine: Stories of the Gouris 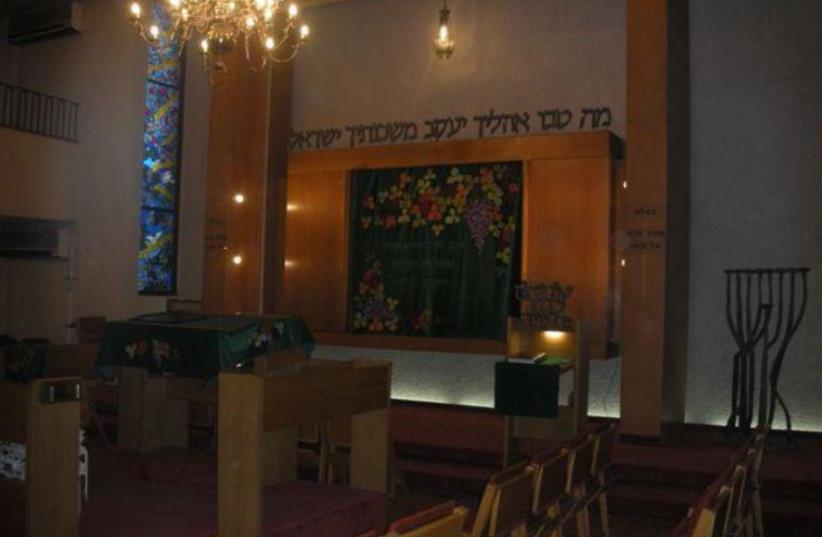 Hazvi Yisrael synagogue
(photo credit: ODED FELDMAN/PIKIWIKI)
Advertisement
■ IT IS customary for the Hazvi Yisrael Synagogue to invite a guest speaker to address congregants at se’uda shlishit on the Shabbat closest to Jerusalem Day. Last year, it was the husband-and-wife team of Irwin and Ariela Cotler; this year, it was again a husband-and-wife team: Israel’s poet laureate and Israel Prize laureate Haim Gouri, 92, and his wife, Aliza.The pair met in the Palmah in 1941, and have been inseparable ever since – except when Gouri had to go on special missions abroad. Aside from being active in the Hagana and the Palmah, he was an important element in Aliya Bet, smuggling illegal immigrants who were Holocaust survivors into the Land of Israel under the very noses of the British. Aliza, though very young when she joined the Palmah, was made a commander in the Harel Brigade.When Jimmy Shemi, one of the soldiers under her command was killed in the War of Independence, she was assigned to go and tell his parents. It was a terrible burden to place on a young girl, and even after so many years during which she must have told the story dozens of times, she still got emotional as she sorted the details in her mind as she spoke. She preferred to find Shemi’s brother, who was supposed to be at Kibbutz Ma’agan Michael, but he wasn’t there.However, there was a relative of the family who joined Aliza and the officer accompanying her. The jeep moved on to Haifa, where Shemi’s parents lived, but they were in Safed, where his father, Menachem Shemi, a well-known artist, was working. So the jeep moved on toward Safed.When they reached the destination, the officer told Aliza to remain in the jeep and he went inside with the relative. After a few minutes Menachem Shemi emerged from the house, put his hand on Aliza’s shoulder and asked if she was all right. He climbed into the back of the jeep and they all made their way to Abu Ghosh, where Jimmy’s body had been placed in the hospital, waiting for official identification. His father pulled back the blanket that covered the corpse, then sat down and drew a portrait of Jimmy’s face.Jimmy was later buried in the cemetery in Kibbutz Kiryat Anavim together with several other soldiers who had fallen in battle on the road to Jerusalem. Menachem Shemi later built a monument there to them and to his son.When it was Haim Gouri’s turn to speak, he recalled that 1967, during the weeks leading up to the Six Day War, was a time of tension and uncertainty. There were no cellphones or Internet to relay news as it was happening. No one knew what was going on. In May of that year, he told Aliza that if they were called up in the reserves, he would know for a fact that a war was brewing. And indeed they were called up, together with other reservists who were well past the age of compulsory service.Among them was the late Meir “Mike” Ronnen, the long-term artist, art critic and book reviewer of The Jerusalem Post, who died in 2009 at the age of 83. Ronnen, who served under Gouri’s command in the Six Day War and helped to capture Ammunition Hill, wrote most eloquently about that battle, in which he developed so much respect for the courage and heroism of the Jordanian Legionnaires who lost their lives.According to one of his articles, he asked Gouri for permission to put up a handwritten sign in English, stating, “Here lie 17 brave Jordanian soldiers.” This gesture of respect was noted by the late King Hussein in a book that he wrote. Gouri mentioned the sign, his own respect for the courage of the enemy and the reaction of the king. However, he neglected to mention Ronnen.Before the Gouris told their respective stories, the congregation’s spiritual leader Rabbi Avigdor Burstein said that legend has it that for the 19 years in which Jerusalem was divided, there were no doves on the Temple Wall, but once the city was reunited, the doves returned.■ AT YESHURUN Central Synagogue last Saturday night, the havdala blessings ushering in the new week were much later than in most other congregations. The reason: Cantor Asher Haimowitz combined a festive Jerusalem Day service, including Hallel, with ma’ariv, with the result that the service did not conclude till 9:14 p.m., at which time havdala was made for the whole congregation. The synagogue, which is quite large, was three-quarters full, which – Jerusalem Day notwithstanding – is highly commendable for a Saturday night.■ SPEAKING ON Sunday night to members of the International Council of the Israel Museum, Mayor Nir Barkat was somewhat late, having been delayed by the traditional Jerusalem Day ceremony on Ammunition Hill. He said that it was important for him to come and address the members at the opening reception at the King David Hotel, precisely because it was Jerusalem Day, but also because he respected the fact that some 200 of them had come to Israel at this time to demonstrate their support for the museum and for the city.Michael Federmann, his wife, Leora, and his sister, Iris, following in the footsteps of Federmann’s father, the late Yekutiel Federmann, traditionally host the opening reception for the annual meeting in Jerusalem of the ICIM. Federmann said that he hopes that the third generation of the family would go on to do the same. Yekutiel Federmann had an abiding friendship with Israel Museum founder Teddy Kollek, whose vision he shared, and was therefore involved with the museum from its very inception.