His Story/Her Story: Women of the Book 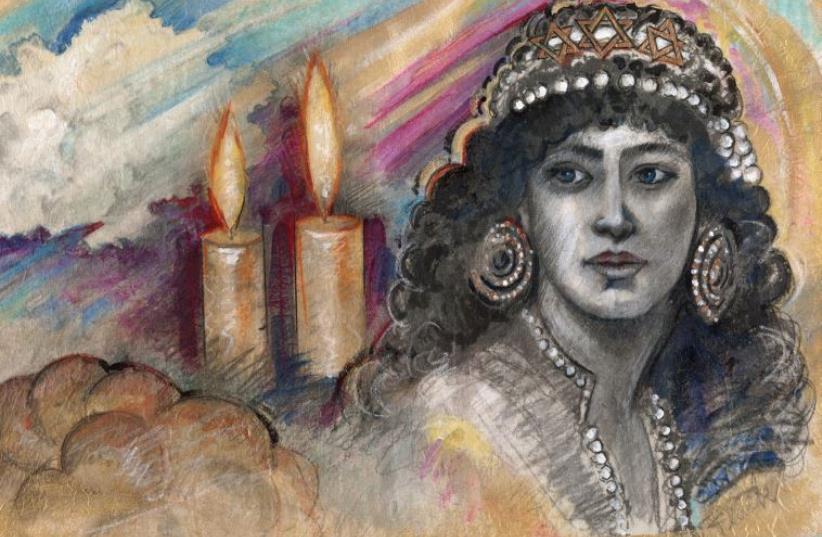 Audrey Flack's ‘Sarah.'
(photo credit: COURTESY JERUSALEM PUBLISHING ATELIER/‘WOMEN OF THE BOOK’ EXHIBITION)
Advertisement
As academic editor of Nashim, I have had the pleasure of being exposed to the talents of our art editor and resident artist, Judith Margolis, who has been contributing interesting and creative pieces to our volumes for more than 15 years, and helps us to choose covers. Although the majority of the journal’s subscriptions are digital, we still take pride in our beautiful and often provocative covers, designed almost entirely by Jewish women artists.As it turns out, there was a student enrolled in the Jewish arts MA program at the Schechter Institute who studied with Dr. Ronit Steinberg, one of our dynamic lecturers specializing in modern Jewish art. This student, a talented Torah scribe and social practice artist named Shoshana Gugenheim, dreamed up an amazing project called “Women of the Book: Jewish Women Recording, Reflecting, Revisioning” (the website for the project is www.womenofthebook.org). The three women have served as the curators for an impressive cooperative creation.During the recent Jerusalem Biennale, the First Station housed an exhibit for this project. On the Friday morning of Succot, Nashim sponsored a discussion centered on this project. Our managing editor, Deborah Greniman (who “discovered” Margolis), Margolis and I spoke, together with Prof. Alice Shalvi, the Israel Prize recipient who has been the moving force behind the financing of our journal as well as our Jewish Arts program.Many of the contributing artists to the project were present, including Schechter faculty member Dr. Jo Milgrom, who conducts a workshop annually that she calls “Midrash with One’s Own Hands.”The presence of so many artists in Jerusalem enabled us to conduct a meaningful discussion.WHAT IS this project that Gugenheim envisions? She conceived of a new combination of Torah and art. As a scribe, she deals with every letter and word in the Torah as she copies them onto parchment.The project sought, by means of art, to combine holy text with the world of Midrash, or interpretation, for each of the 54 Torah portions. The artists would all be Jewish women: Israeli and non-Israeli (from 11 countries); religious, traditional and secular; established artists as well as budding talents.The aim: to bring in multitudinous female voices, heard by means of the imagery they choose to present and develop.As became clear from the discussions, some of these women, well-versed in Torah, could read the original Hebrew. Others had to rely on translation and might even have been encountering verses for the first time. Among the techniques used were paper cuts, relief prints, woodcuts, pencil, ink, threads, gouache (opaque watercolor paint), gold leaf, mixed media and digital imaging via photography. One artist, born in Hong Kong, used Chinese ink to express herself. Orchestrating this international project took nine years.This approach resulted in freedom of expression with a tremendous diversity of modes, ranging from traditional to unusual. Nevertheless, all stemmed from the same source: Jewish women interpreting Torah visually. To fulfill this dream, the project needed 54 artists, one for each weekly portion. Some of the women present at the First Station explained that, unlike the Torah scribe, they had never worked before with parchment; it was a new and revelatory experience for them. The ultimate goal is to sew all of the portions together, with the final product being a visual midrashic scroll.DO WOMEN interpret Torah differently than men? I daresay that the answer is a resounding yes! For example, the first contribution to the series for Genesis/Bereishit is a sky-blue and white-silver point drawing of six circles opposite one larger circle, inspired by the 14th-century Sarajevo Haggada. A portion of this representation of Creation by Susan Schwalb was also chosen as a Nashim cover in 2008.For the Yitro Torah portion, Silvia Rubinson of Argentina created a mixed-media product, with etchings of the Ten Commandments taken from a Torah scroll that her family brought from Europe in 1928. She also included material from library books that she located in the schools where her grandfather taught during this period, thus making a personal as well as communal statement.Siona Benjamin, a Bombay-born artist living in the US, illustrated the sota test for women suspected of adultery as described in the portion Naso in Numbers 5:11. Her classic blue paint covers the entire body of a woman, grounded like a tree, who is undergoing this traumatic and humiliating experience. Elsewhere, the commandment to be charitable is explored by Andi Arnovitz who chose to depict the portion Re’eh. Her brightly colored reds, oranges and yellows form hands (hamsa) representing various types of charity. She utilized lithographic inks, a Xerox transfer and threads to make this bright and positive image.The picture reproduced here is connected to this week’s portion, the life of Sarah.The artist is Audrey Flack, who painted a colorful picture of this matriarch with whom she has learned to identify. Both Flack and Sarah are strong women who confronted difficult life circumstances without revealing weakness and private emotions; pain, fear and sorrow were part of their lives, but dealt with bravely.This project reflects these women’s desire and ability to express themselves artistically in the Jewish world. The final product will be breathtaking; we can only hope that it will inspire other Jewish women (and men) to be creative, each in her own way. The writer is a professor of Jewish history at the Schechter Institute of Jewish Studies in Jerusalem.