Banished by his family in northern Israel after coming out as gay seven years ago, Karam Dadu now lives in Tel Aviv. 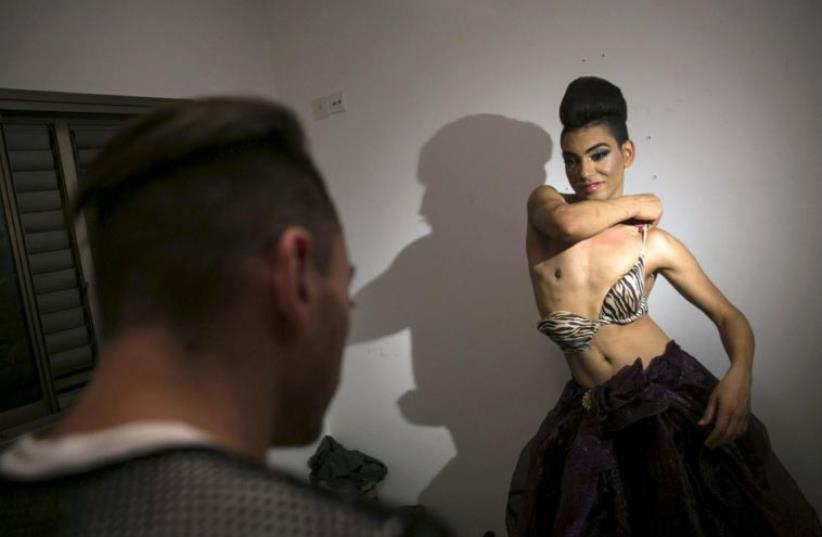 Karam Dadu, a transvestite homosexual Israeli Arab, prepares before a drag show in Tel Aviv
(photo credit: REUTERS)
Advertisement
Marching through a Tel Aviv bar in a tight purple bodice and skirt, pink lipstick glittering, eyelashes fluttering, Karam Dadu certainly turns heads. What those watching may not realize is that Dadu is a transvestite homosexual Israeli Arab.Banished by his family in northern Israel after coming out as gay seven years ago, Dadu now lives in Tel Aviv, a colorful and open city that on Friday will host its annual gay pride parade, with tens of thousands of revelers filling the streets.For Dadu, 23, the festival is a chance to perform his popular drag queen act under the stage name "Karma Sutra", soaking up an atmosphere far removed from the hatred and ostracism he left behind when he fled his parents' home.Being a gay transvestite in Israel's minority Arab community is almost unheard of. As in much of the Arab world, homosexuality is shunned and those who come out as gay live in fear of rejection or even honor killings - death at the hands of relatives who believe they have brought shame on the family.Dadu, born in the northern city of Acre, where there is a mixed Jewish and Arab population, naively declared his sexual orientation to his family when he was 14. He was assailed with abuse and violence and fled two years later."There was not a single day during the two years after I came out and until I had to leave that I didn't want to die," he told Reuters, speaking in Hebrew. "I hated myself every day."During a brief visit home to his family when he was 19, he said his enraged, drunken father struck him repeatedly with an iron bar. He was hospitalized for seven weeks. That incident prompted him to abandon the family and seek a new life."After two or three days alone in hospital, my mother visited. She kept her distance from my bed and said: 'It's all your fault, you are to blame because you are homosexual.' There was nothing more to say, and she left."Since moving to Tel Aviv, long regarded as a gay-friendly city that is awash with rainbow flags during the pride festival, Dadu has found a community of like-minded people. He shares an apartment with some Israeli Jews near the city center and works in a restaurant.Walking down Tel Aviv's trendy Gan Meir park, Dadu does not look out of place with his hair gelled up in a big wave, wearing a pink, tie-dyed singlet and basketball shoes.And when he dresses up for a performance, applying fake eyelashes, colorful eyeshadow and glittering lipstick, before squeezing into a tight bodice, fishnet tights and high-heeled shoes, he is grateful for Tel Aviv's openness."I feel that I can breathe freely," he said."All eyes are on me and nobody is judging me as a homosexual or an Arab, but only for my art. It's wonderful, liberating, as if to say 'Karam is alive'. Not just surviving, but alive."