Popular Israeli DJ and bar owner Mike Zof admits that he might be a bit of a Star Wars nerd. 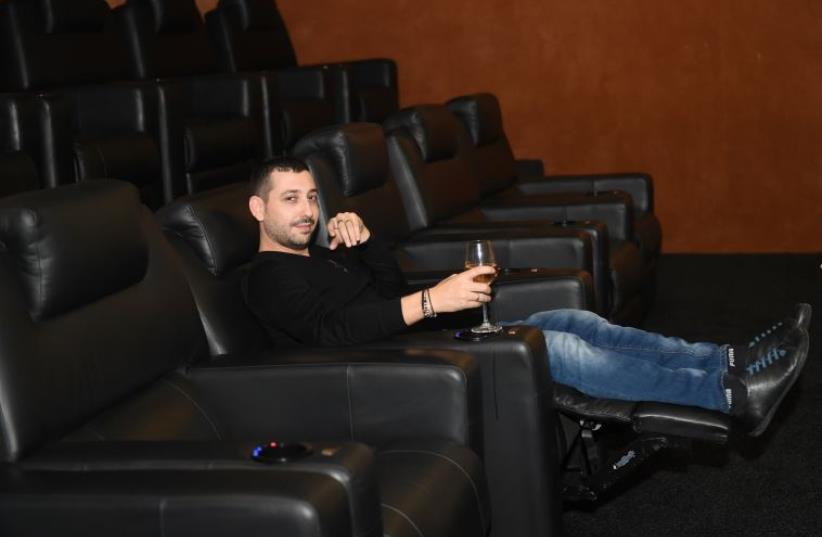 DJ and bar owner Mike Zof gets cozy with champagne at his personal screening of the Star Wars film in Petach Tikva, December 16, 2015.
(photo credit: ADI VILDER)
Advertisement
Amid the global frenzy surrounding the premiere of the new addition to the Star Wars franchise, "The Force Awakens," one Israeli man decided to make the dream of every galactic fanboy come true. Mike Zof, a popular Israeli DJ originally from Russia, decided to host his very own personal screening of the highly-anticipated film at midnight on Wednesday by purchasing all of the tickets for himself to the VIP hall of the cinema complex Globus Max in Petach Tikva.  VP of the Globus Max cinema chain, Efi Lipshitz, was surprised when he received a phone call a number of days before the film's debut in Israel from Zof, who said he wished to buy all the seats in the theater to see the film completely by himself in order to be one of the first Israelis and first people in the world to see the film.Zof, 36, proceeded to reserve the entire VIP hall, which normally seats 60 moviegoers, totaling approximately 2,000 NIS, plus an additional 500 NIS for specialty services and refreshments, including unlimited champagne bottle service, a variety of finger foods and a personal sushi chef.Meanwhile, tickets for the film sold out across many theaters worldwide, and fans had to fight to get a hold of the precious invite to the film's debut. Consequently, a black market for the coveted tickets developed online and many fans were unable to score a seat to the premiere. Zof is a part-owner of several bars in Tel Aviv, as well as DJ for the global station FASHION TV for the last six years. The DJ admits he may be a bit of a Star Wars nerd, and stated that he has seen each of the films at least 10 times, possibly more. His home, he says, is lined with Star Wars memorabilia and souvenirs. Although some Star Wars enthusiasts may be critical or envious of Zof's private screening, it is safe to say that the force was certainly with him that night.