When the infant’s mother stood up to leave the room, Dr. Sydney Engelberg took it into his arms, calmed it down, and continued with the lecture. 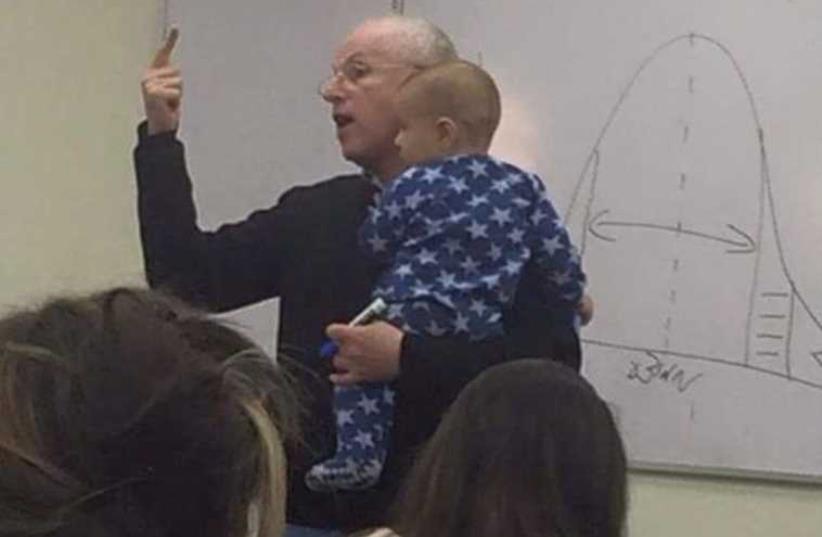 Hebrew University Professor Sydney Engelberg holding a student’s baby while lecturing‏
(photo credit: FACEBOOK)
Advertisement
Social media and the blogosphere were abuzz this week after a Facebook post showing an Israeli professor holding a baby of one of his students in his arms while continuing with a lecture went viral.The post was initially published by Sarit Fishbaine, the daughter of Hebrew University lecturer Dr. Sydney Engelberg. The South African-born Engelberg, who teaches a course in organizational behavior, became an Internet celebrity after he took into his arms an infant of one of his students who began crying uncontrollably during class.When the infant’s mother stood up to leave the room, Engelberg took it into his arms, calmed it down, and continued with the lecture.The image of Engelberg holding the child and his daughter’s post, in which she describes her father as encouraging his female students to bring their children to his lectures, even allowing them to breastfeed them, have catapulted him to Internet stardom.Thus far, Fishbaine’s post has attracted nearly 50,000 likes and over 4,300 shares on Facebook.“Show me another professor who does that,” Fishbaine wrote proudly. “Because my dad is simply the best in the world.”