Israeli tourist arrested for climbing Brooklyn Bridge for a selfie

The arrest comes days after a group of youths nearly died while taking a selfie on thin ice on a pond in Central Park. 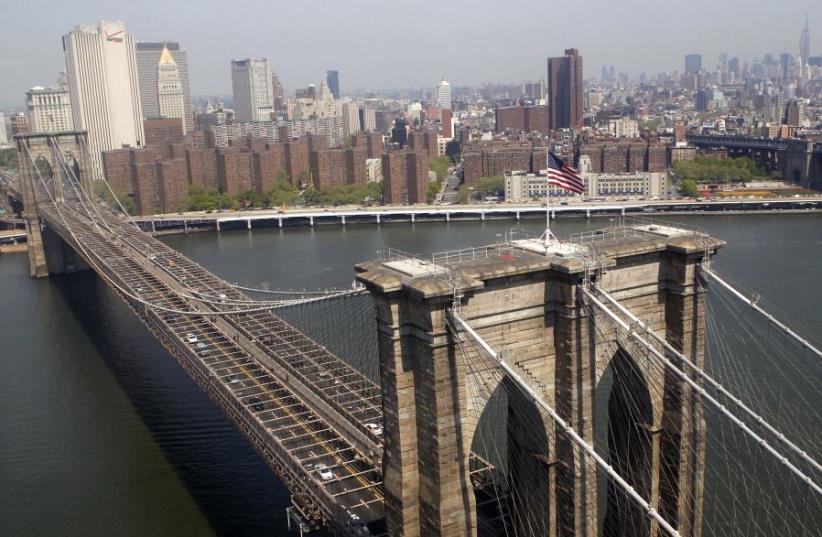 The Brooklyn Bridge and lower Manhattan is seen from a helicopter in New York City, April 22, 2010.
(photo credit: REUTERS)
Advertisement
Police in New York arrested an Israeli tourist who climbed the Brooklyn Bridge to take a selfie there.The tourist was an 18-year-old man whom the New York Post identified as “Shivel Dikstein.” Unlike Shoval, Shivel is not a common Israeli name.He was arrested at 7 p.m. Thursday after allegedly jumping a fence on the Brooklyn side, the report said.“He jumped up to get a selfie with the skyline behind him,” the Post quoted a witness as saying.The man was charged with criminal trespass.The arrest comes days after a group of youths nearly died while taking a selfie on thin ice on a pond in Central Park.Deaths related attempts to take self portraits with smartphones are increasing worldwide.In Iran, a man in his 40s was killed after he tried to take a selfie in front a dam as it burst during freak weather conditions in the southeastern city of Jirof, the Evening Standard of London reported earlier this week.Kashmir, a  disputed territory between India and Pakistan, registered its first known selfie-related fatal incident this week. Adnan Mehraj Mir, 14, of Khanyar died after he was hit by train near Nowgam Railway Station when he was taking a selfie on the railway track, police said.In Dubai, a Russian model and popular user of the Instagram social network risked her life for a selfie last month illegally, prompting authorities to declare she may be permanently banned from re-entering that state.Viki Odintcova, 23, dangled down from a top floor of the 1,000-foot tall Cayan Tower while holding on to a male assistant’s arm.And in Argentina, a group of tourists last month dragged a dolphin calf out of the water in the city of San Bernardo, south of Buenos Aires, to pose for selfies with it, resulting in the animal’s death, the Argentine newspaper La Capital reported.