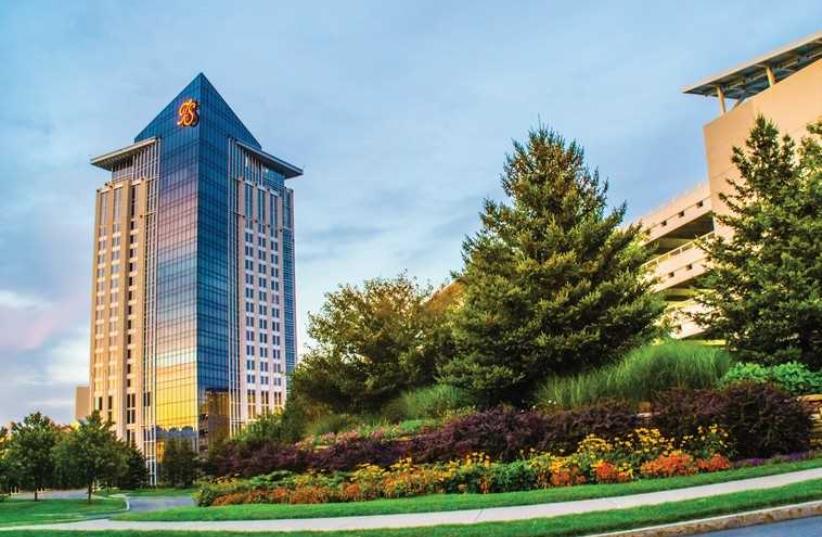 TURNING STONE Resort Casino covers 3,400 acres in central New York and is owned and operated by the federally recognized Native American Oneida Nation
(photo credit: Courtesy)
Advertisement
Getting There: Turning Stone Resort Casino is approximately 400 km. northwest of Manhattan at Exit 33 off of I-90. For more information visit www.turningstone.com.

VERONA, New York – Let me start by saying I’m not a fan of casinos.I’ve crossed Atlantic City and Vegas officially off the bucket list after a one-time visit to each. I enjoyed the shows at each location, but little else.So when my boyfriend announced he was surprising me with a getaway to Turning Stone Resort Casino in the central part of the state, I was less than overjoyed. He’s hardly an inveterate gambler, but he knows that when I travel, I gravitate to tranquil experiences that include spas and copious rounds of steaming, massage, facials and reflexology. Amazingly, this sprawling, mini-city of a casino set in the upstate New York countryside delivered on all counts.Because of its proximity by car from New York City, no plane ticket is required for an otherworldly getaway, and that was another irresistible draw.Turning Stone Resort Casino sits on 3,400 acres and is owned and operated by the Oneida Nation, a tribe of federally recognized Native Americans who held territory in the region long before European colonization. The campus includes several hotels, spas, a recreational vehicle park, five golf courses, more than 20 restaurants, an amusement arcade, entertainment complex for live performances and a 11,000- sq.m. casino space.The main part of the complex features The Tower Hotel, a 20-story building that’s the tallest structure between Albany and Syracuse. Smack in the middle of the nightlife and gambling mayhem, the tower has the sumptuous TS Steakhouse on the top floor and its rooms feature panoramic views of the countryside.We opted for quieter surroundings at The Lodge, best described as the yin to the casino’s yang. It’s a bit of a walk from the action, but it becomes clear why: The isolated location of the lodge affords a world that’s as quiet and tranquil as a library, with the soothing décor of a mountain top resort.The Ska:ná: Spa, guest rooms and lobby are all infused with elements of Oneida spirituality.Guests are given dream catchers, made by a local artist as a keepsake to take home, along with a small brochure explaining their function: To trap the bad dreams and preserve the good ones so rest if more purifying.An Oneida elder who helped form the Lodge’s mission said it was built as a place where guests could come for a healthy rejuvenation and regain a clear focus.The award-winning, 3,000-sq.m. spa at The Lodge was appropriately named Ska:ná:, the Oneida word for peace. Its treatment rooms are only reachable by walking a winding indoor path of rock formations and waterfalls – a deliberate architectural intent for guests to leave the rest of the world behind. Many services include holistic remedies the Oneida’s used centuries ago like juniper, white pine oil, dandelion and sage. The Oneida Nation even makes its own line of herbal teas for spa guests.Also in the complex is an award-winning restaurant, Wildflowers, where chef Dustin Tuthill turns dinners into two-hour tasting events.Then of course, there’s the yang side of the equation: If the unmitigated serenity gets to be too much, all one has to do is cross the enclosed footbridge to descend into the comparative mayhem of the casino, it’s 20+ plus restaurants, gift stores, gaming tundra and buffet of live entertainment.Turning Stone Resort Casino recently won accolades for its Ska:ná: Spa and golf courses.Ska:ná: was named among the world’s top 10 Casino Spas and Top Spas by SpaFinder readers for the second consecutive year. The Atunyote, Kaluhyat and Shenandoah golf courses were each included in Golfweek’s Best Casino Courses of 2013, and Shenandoah Golf Club was selected as one of the nation’s top golf shops by the Association of Golf Merchandisers.And if gaming, massages and Tony Bennett concerts aren’t enough stimulation for you, there’s the nearby town of Utica approximately 30 km. west at Exit 31.In addition to a few quirky facts like it being Annette Funicello’s birthplace and the small city where billionaire real estate developer Steve Wynn was raised, Utica is also home to the National Distance Running Hall of Fame, the Munson-Williams Arts Institute, the Stanley Center for the Arts and brew tours at the Matt Brewing Company.Utica also has some amazing ethnic dining thanks to waves of immigrants (from Italians to Bosnians) flocking to the city for work in brickyards, textile mills and on the Erie Canal. Don’t miss the old-world Italian bakeries and Ventura’s Restaurant.An institution since 1943, it’s still cranking out bowls of Italian Wedding Soup and handmade orecchiette pasta made famous by founder Marie Ventura.
Advertisement
Subscribe for our daily newsletter