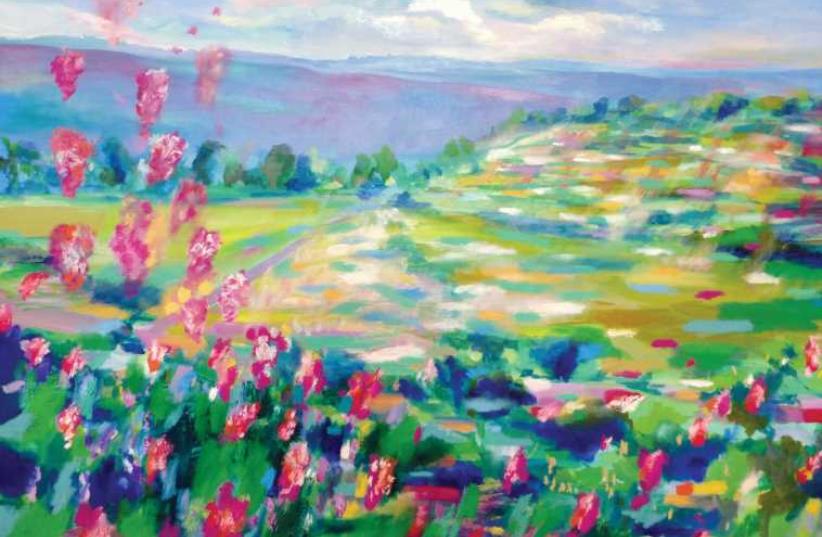 Painting by Yoram Raanan
(photo credit: YORAM RAANAN)
Advertisement
What is so special about Jerusalem? The fact is that Jerusalem – unique among the cities of Israel – is completely identified with our Jewish national mission, expressing by its very name “City of Peace” our prophetic vision for the world.When the Almighty initially elected Abraham, he gave him a mandate: “Through you shall be blessed all of the nations of the earth” (Genesis 12:3). It was for this universal purpose that Abram’s name was changed from Av Ram (exalted father of one nation, Israel) to Avraham; father and teacher of a multitude of nations.Abraham’s descendants will eventually erect a Temple to which all the nations will flock in order to learn and accept the Torah of peace: “To beat their swords into plowshares and their spears into pruning hooks, so that nation will not lift up sword against nation and humanity will not learn war anymore” (Isaiah 2:4).Jeru means “city” in ancient Semitic languages and Shalem means “peace” (wholeness).Abraham was chosen because he was uniquely committed to ethical conduct, the only true path to peace: “For I have elected, loved and appointed him, because he commands his children and his household after him that they keep the way of the Lord, to do compassionate righteousness and moral justice” (Gen. 19:19).Hence, the very first mention of Jerusalem in the Bible is in the context of a meeting between Abraham – immediately after he had defeated the four terrorist kings who captured the innocent Lot – and Melchizedek (literally, the King of Righteousness), the ruler of Shalem. Our Sages identify Shalem with Jerusalem and Melchizedek with Shem, son of Noah – a righteous gentile who served as priest to the Universal Lord of peace, morality and righteousness.Melchizedek brought out bread and wine – reminiscent of the showbread and wine libations of the laterto- be-built desert sanctuary and Jerusalem Temples as well as of our present-day hallot and kiddush wine. He then blessed Abraham to the Lord Most High, Maker of Heaven and Earth, who had delivered Abraham’s foes unto his hands.Abraham reciprocated by giving this gentile priest tithes of everything he owned (Gen. 14:18–20). Nahmanides derives from this episode that Jerusalem is the one place in the world which had always maintained faith in ethical monotheism – in the God who created Adam and Eve in His image. So it is no accident that Abraham met his gentile counterpart in Jerusalem, to declare their joint acceptance of the God of righteousness and peace.Our Holy Temples were (and will be) built on Mount Moriah, Jerusalem, and from there a message of peace will be communicated throughout the world. This is the very place to which God sends Abraham to sacrifice his beloved son Isaac. Abraham acquiesces, but God stays his hand – and this entire incident may well have come to teach that although it will sometimes be necessary to make the ultimate sacrifice for our faith, God does not want innocent human beings to be killed in His Name. The God of ethical monotheism is not Moloch.Abraham calls the place of the binding “God shall be seen,” that is to say that from Mount Moriah the God of ethical monotheism shall be seen and accepted by all the nations of the world. Jeru, or Yeru, is a cognate of the verb to see, Yera’eh, will be seen; the Bible will later teach that on the three pilgrim festivals, every Jew must go up to the Temple Mount “to be seen” by God (Deuteronomy 16:16). And the story of the binding of Isaac concludes with a repetition of the Divine mandate to Abraham, “And through your seed all the nations of the earth shall be blessed.”Let us fast-forward 4,000 years. In 1978, at the end of the Camp David peace talks between US president Jimmy Carter, Egyptian head of state Anwar Sadat and prime minister Menachem Begin, Carter pressed Begin to sign a letter in which he would “merely” agree to place the final status of Jerusalem on the negotiating table. Begin refused. With great emotion he explained that in the Middle Ages there lived a beloved, wise rabbi: Rav Amnon of Mayence, who was pressed by the bishop at least to consider converting to Christianity.After a lengthy argument, the rabbi agreed to ponder the issue for three days.As soon as he returned home, the rabbi was smitten by deep despair; at the end of the three days, he returned to the bishop. “Punish me, O bishop,” he cried. “I should never have agreed to think about such an egregious act against my faith. The tongue which said I would ponder, the hand that shook yours in acquiescence, the leg that came to do your bidding – remove them from my body.” The bishop gladly did as the rabbi requested. The next day was Rosh Hashana, and racked with pain, Rav Amnon was brought to the synagogue, where he cried out before the congregation the U’Netaneh Tokef prayer he had composed the day before.Begin told the American president, “I understand that we may sacrifice a limb to save an entire body. But Jerusalem is Israel’s heart, the focus of our mission.Our Psalmist declared, ‘If I forget thee, O Jerusalem, let my right hand be removed from my body, let my tongue cleave to the roof of my mouth, if I remember thee not’ (Psalms 137:5-6). Please don’t ask me to sign your letter; I would rather forfeit my right hand and my tongue. I cannot repeat Rav Amnon’s transgression….”Shabbat Shalom and Yom Yerushalayim sameah.The writer is founder and chancellor of Ohr Torah Stone institutions, and the chief rabbi of Efrat. His latest book, The Living Tree: Studies in Modern Orthodoxy, is available from Maggid Books, a division of Koren Publishers Jerusalem.