The researchers excavated 14,000-year-old Natufian houses at the site in Mount Carmel and found abundant fossilized trash, made of broken animal bones and the remains of numerous meals.

By REUVEN YESHURUN
JANUARY 5, 2015 17:43
Excavating the earliest houses (14,000-year-old) in Mount Carmel, Israel.
(photo credit: REUVEN YESHURUN)
Advertisement
JPost Holy Land is a new column that will bring you the latest archaeology news and stories from Israel in collaboration with the University of Haifa.
What can archaeologists learn from a pile of garbage? Quite a lot, it seems. In a new study headed by Dr. Reuven Yeshurun of the Zinman Institute of Archaeology, The University of Haifa, the "filthy" behavior of our ancestors, some 14,000 years ago tells us about their diet, about their hygiene, about their cooking and much more.  "Home sweet home," we can already tell, wasn't part of their life time.
Our Stone Age ancestors started building houses and forming small ‘villages’ about 14,000 years ago, in present-day Israel, several millennia before the beginning of farming and civilization. The first permanent settlers, who belonged to a prehistoric entity which the archaeologists call the Natufian Culture, were still hunter-gatherers, and did not practice agriculture; they subsisted on hunting game and collecting wild plants. They built houses in stone, for the first time in human history. 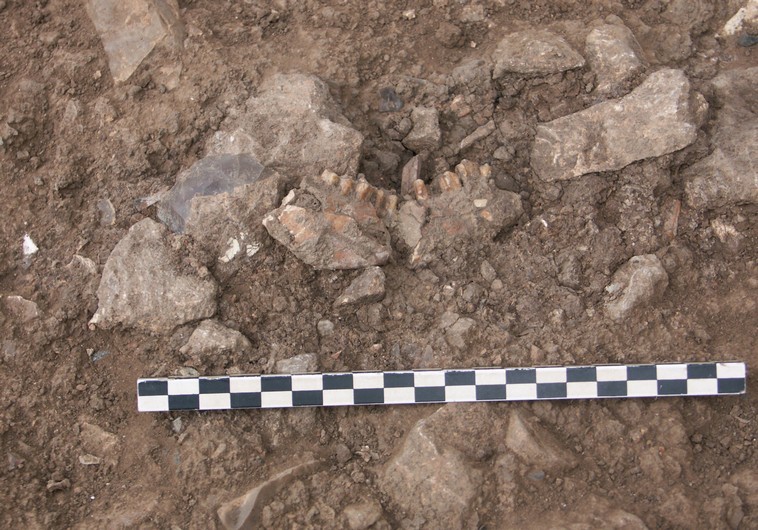 (Broken gazelle jaw discovered on a house floor in a 14,000- year-old house in Mount Carmel, Israel. Photo: Reuven Yeshurun)
The new study by Dr. Yeshurun focused on ancient food refuse excavated from these prehistoric houses. The study was published in the October issue of the Current Anthropology journal. The researchers excavated 14,000-year-old Natufian houses at the site of el-Wad in Mount Carmel and found abundant fossilized trash, made of broken animal bones and the remains of numerous meals. Looking at the bones under the microscope, the researchers found evidence to indicate that the bones were not thrown away after consumption, but left on the spot to dry, get trampled and break. This means that the Natufians simply left their trash where it fell, and made little or no effort to gather and clean it.
Such filthy behavior is very fortunate for the archaeologists, making it possible to identify the locations where the hunters roasted the meat, where they ate, and even how they felt about their dwellings. The trash evidence shows that the inhabitants of the first settled communities butchered and roasted gazelles, wild boars, hares, tortoises and even foxes and lizards, ate them inside or just outside their houses, and threw the remains on the spot – often on the house floors. Near the houses a large heap of stones was found, containing numerous burnt bones. This might have been where roasting took place. The Natufian attitude towards organic trash and general lack of house maintenance and cleaning suggest that the house may not have yet evolved into a true “home” in this period of transition from nomadic hunter-gatherers to settled farmers.
Advertisement
Subscribe for our daily newsletter