"The photos reminded me that Adar was once a foreign baby and that we had been entirely unknown to him; Yet, here we were together." 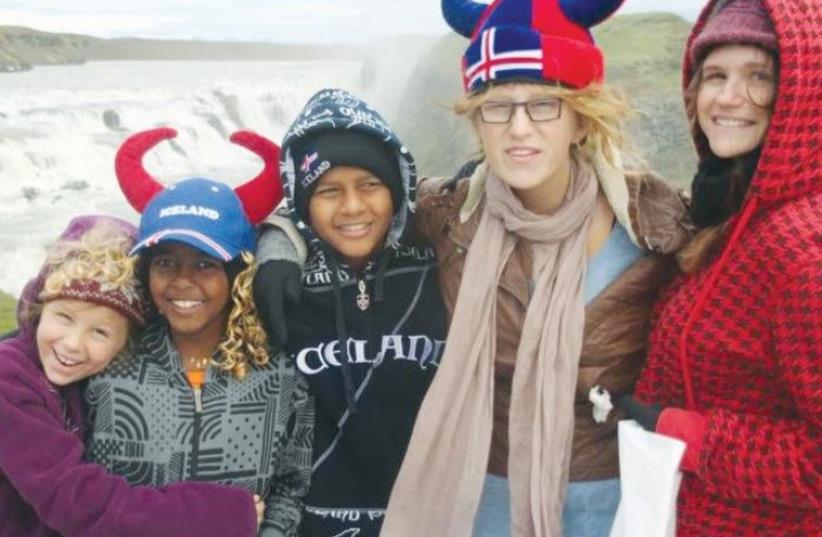 The author's children on family vacation in Iceland in 2011. (From left to right) Ashira, then eight; Zamir, nine; Adar, 12; Hallel, 16; Aliza, 18
(photo credit: Courtesy)
Advertisement
I was “potchkying,” taking scattered laundry, shoes, toys and school supplies to their places. I carried a small stack of books from the radiator cover in the foyer – a Bible, a hassidic commentary, and a talmudic tract fluttering with post-its – to the family room, my favorite room in the house, where an L-shaped couch stretches in front of two walls of bookshelves. As I climbed to put the books away, I was careful not to knock down my son Adar’s tent, a light-blue fleece blanket that stretched from the back of the couch to a shelf.Now Adar’s red sneakers stuck out, blinking, from this soft structure as he backed out clutching four large laminated photos of my husband, Yosef, and our daughters, Aliza, Hallel and me.“What are these?” he asked.“Oh, wow, I almost forgot about them,” I said. “Come here.”Adar and I sat together on the couch, cuddling to defy the late-autumn cold, and examined the enlarged faces. The last of the afternoon sun shone through the sliding glass doors, laying a golden square on the wood floor at our feet. Adar nestled into my left side, and I held the pictures with my right. At almost five, and now a big brother, he was still my baby.He fingered the blue yarn that laced through two punch holes at the top of each picture, the two ends hanging limply at the back. “Fitsum, who took care of you in Ethiopia, hung them inside your crib so you could see our faces,” I told him.My mother had offered to enlarge pictures of each of us to send to the orphanage while Adar was still there. “They could put them inside his crib, facing in,” she said. “That way he’ll get to know your faces.”Holding the pictures and Adar at the same time was disorienting. My heart suddenly felt too big for my ribcage, and the world seemed to clash with itself. The photos reminded me that Adar was once a foreign baby and that we had been entirely unknown to him. Yet, here we were together. Hadn’t we always been mother and son? Adar stared at his Baba’s printed letters, like an archeologist deciphering a faded inscription. “What does it say?” he asked.I paused. “‘For Daniel.’” He had arrived at the orphanage with no information about his birth or identity.The director, Amber, had assigned him her brother’s name.I looked at his face for signs of emotion. The name Daniel represented a part of his life that we could recount for him – the nine months he had lived at African Cradle Children’s Center. The name was also, however, a symbol of the unknown. Did he have a name given by his birth family? What was their name? Did they love him? Resent him? Did they seek to save him or just want to be rid of him? Were they still alive? This small pile of laminated photos with “For Daniel” written boldly across their backs was like an apparition, a visible symbol of the unseen. Adar traced the block letters with his finger. I could see he was assimilating this information by the set of his jaw and his slightly furrowed brow as he flipped between the writing and the pictures, as if it were always the other side that held the secret.“Is Daniel my real name?” he asked.The biblical Jacob was given the name “Israel,” which means “struggler with God.” Years after he fled his twin, Esau, he would now face this estranged brother.Alone under the night sky, fearing the coming day’s encounter with Esau, an ish (a “man”) appeared to Jacob and “wrestled with him until the rise of dawn.”Who was this ish? An angel? (Did God have a plan for Jacob?) A ghostly vision of Esau? (Was his brother planning to attack him?) Or another aspect of Jacob himself? (What lurked in Jacob’s soul that he had to face?) Jacob overcame the ish, who pleaded, “Let me go, for dawn is breaking.”“I will not let you go unless you bless me,” Jacob answered.“Your name shall no longer be only Jacob,” said the ish, “but also Israel, for you have striven with beings divine and human and have prevailed.”The name Daniel, like the ish, was a symbol of the many layers that make up his self – and demanded that Adar place his life in a larger context than personal biography.He was no different from anyone else – we all are made of unknown multitudes.But he did not have the gift – or curse – of a façade to pretend otherwise. And now neither were we able to pretend.The last of the sun gave our family room the washed-out appearance of an aged photograph. With Adar’s permission, I reclaimed his fleecy tent as a blanket. The fort he had built disappeared, and we wrapped ourselves in its remains, warm and snug together. After encountering this ish in our now shadow-filled house, I held Adari – my Adar – tight. “I will not let him go,” I vowed silently, “until You bless him.”
Rabbi Susan Silverman, @justadopt, is the author of the upcoming Casting Lots: Creating a Family in a Beautiful Broken World (Da Capo/Perseus). This is an abridged version of a chapter from that book.