Leaders in the making

By giving back to society, Ma’agalim is teaching young adults that no matter one’s background, one must always do their best and to help others. 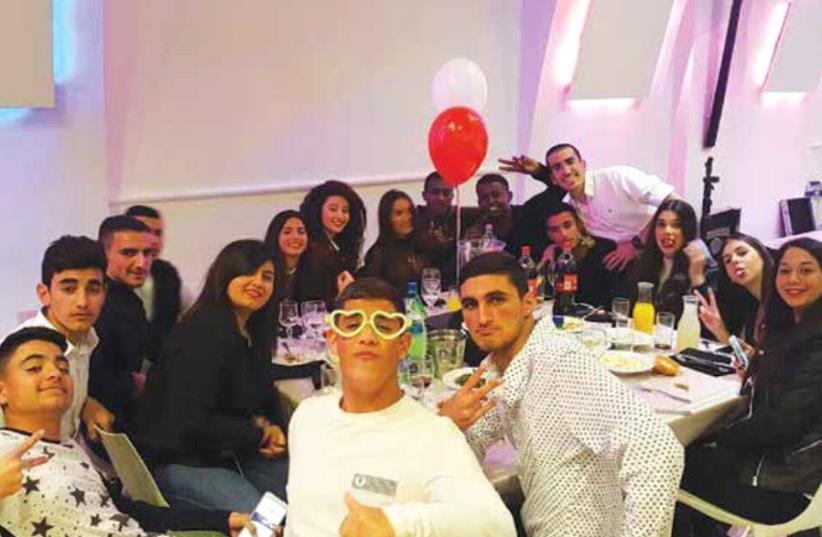 Ma’agalim volunteers pose at a bar mitzvah they organized in February as part of the organization’s Social Action and Leadership Program for 11th grade students
(photo credit: DANIEL SCHRIKI)
Advertisement
Most boys don’t spend the last moments of their bar mitzva weeping in gratitude.But when a 12-year-old boy from Kiryat Gat finally got his wish to have his bar mitzva that he never thought would happen, that’s exactly what he did.“You don’t understand what you did for me. You don’t understand how happy I am. This is unforgettable,” the boy, whose name is being withheld for his family’s privacy, told the group of volunteers who made his dream come true.The volunteers – 100 high-school students from Kiryat Gat – were from Ma’agalim, an educational non-profit organization that mentors at-risk youth in Israel.Ma’agalim’s empowerment program teaches the students essential leadership and life skills and instills in them the notion that they alone are the makers of their own destiny.“They come from places that aren’t easy. Their parents tell them ‘keep your head down, pass your tests, don’t overthink things.’ But we want to tell them life can have much more substance,” Shuval Hagag, a Ma’agalim counselor, told The Jerusalem Post.“We want to show them that they can be leaders. They were not born to punch a clock for the rest of their lives,” said Assaf Weiss, founder and CEO of Ma’agalim. “If you came from a hard place, a problematic place, it doesn’t mean that’s where you’ll be for your whole life. You can change it. Your life is in your hands,” he added.As such, “Be the best that I can be,” is the Ma’agalim motto, which manifests itself by instilling leadership skills in the students.Organizing the bar mitzva above was one such example of Ma’agalim’s yearlong Social Action and Leadership Program, which provides 11th-grade students with a clear sense of what they can do to make a difference in their community.Students are organized into groups of young activists and together with their Ma’agalim counselor, who acts as a mentor, they design, lead and implement social action projects in their neighborhood, city or school.Each group is given a baseline of $2,000 and any extra money needed for a project is raised by the students.For the bar mitzva project, the students worked closely together with their high school administration at the Ze’ev Boim High School to care for one of their own – a boy whose single mother’s salary could never afford to give him something that most Jewish boys feel is their birthright.It took a month for the students to organize the bar mitzva, which took a lot of groundwork: The students approached organizations and private citizens for donations. Companies like the Aroma coffee-shop chain contributed roughly $100, while many other vendors offered their services at a discount.All in all, the students were able to raise approximately $4,600. During the planning process, the class was divided into groups, with each group responsible for one task essential to the bar mitzva like catering, hiring a DJ and decorations.At the end of the ceremony, the boy’s mother handed each student a gift bag and profusely thanked them for their efforts in coordinating every aspect of the bar mitzva from A to Z.“We all gave a part of ourselves,” Shuval Alush, 17, one of the students, said. “Having the bar mitzva was the pinnacle of all the work I’ve been doing with Ma’agalim.“[Ma’agalim] gives us strength. We have deep conversations about what we’re capable of, and its fun to give back others even less fortunate than us. It’s very rewarding,” she added.For Hagag, the Ma’agalim mentor for this project, as a 23-year old sociology student at Ariel University, she sees the rich, untapped potential in these students and says Ma’agalim empowers them to develop self-confidence.“The fact that they were able to get this project off the ground and execute it so successfully shows that these students have what it takes to be a leader,” Hagag said.“These kids have incredible potential, they just need direction,” she said, saying that she values her work at the organization because guiding the next generation is the wisest investment we can make as a society.Another recent example of a Social Action and Leadership Program was renovating the home of an impoverished family in Afula.“This year, the students thought hard about what we can do. We wanted to do something substantial,” Haim Ben Sheetrit, another Ma’agalim counselor, explained. His group the year before, also planned a big bar mitzva and it was a rousing success.It was not easy to select which family to assist, mostly for logistical reasons.With Sheetrit’s help, the group started looking for a family with a garden.Eventually, they paired up with a welfare NGO who located an Ethiopian single mother with three children in Afula.“She was a very modest woman who wasn’t demanding. She shyly told us there’s no heat in the house,” Sheetrit recalled.The students from the Amit Yehuda high school in Afula got to work immediately – they installed a heating unit, painted fences, landscaped the garden and gave the house a complete makeover with the $1,900 they were able to raise. In addition, they received a significant leg up from the Chesed Olam Birkat Margalit organization, which donated roughly $800 to the project.The students came to the house on Mitzva Day (Good Deeds Day) last month and after a long, labor-intensive day, changed the complete makeup of the house.“When the work was done, you saw the satisfaction in their eyes,” Sheetrit said of the students after their long day of renovations.“The family didn’t even understand that this work could be done,” he marveled.“It’s amazing to see what we’ve been able to do. It all started with a small idea, and slowly it became bigger and bigger until the moment we actually did the project,” Meir Elimelech, one of the students, said of the experience. “I’m thrilled to finish the project with a tremendous sense of satisfaction.” This article was written in cooperation with Ma’agalim.