Less is more for Eilat’s Queen of Sheba Hotel

The venerable vacation destination in the South has dropped the Hilton name and gained a new minimalist look. 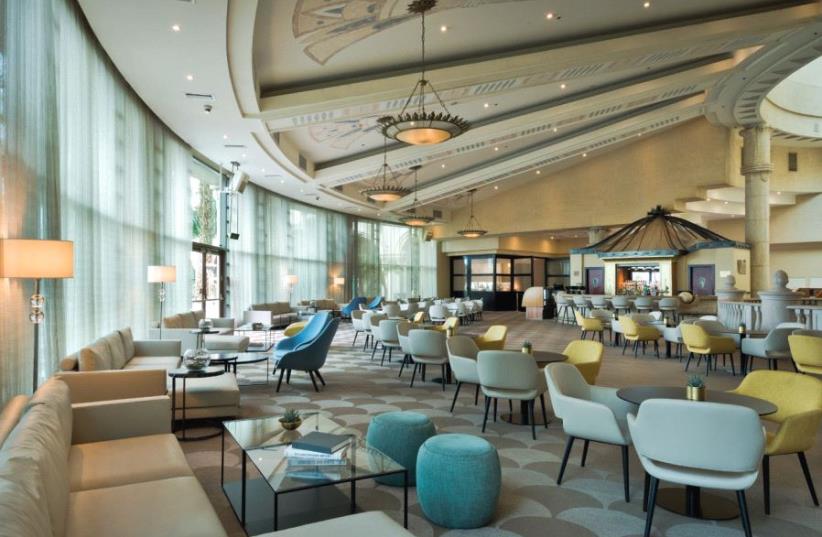 The Queen of Sheba hotel in Eilat
(photo credit: Courtesy)
Advertisement
When one goes through a breakup, the stereotype dictates that a drastic makeover is order – a new snazzy haircut and a cutting-edge wardrobe are essential to creating a post-breakup identity.Although the split between the Hilton and Eilat’s Queen of Sheba was an amicable one, the hotel has reinforced that stereotype by undergoing an NIS 23 million (and counting) renovation from the ground up.The split occurred after a successful 17-year partnership with Hilton, mostly because owner Yitzhak Tshuva decided strike out on his own and create a hotel empire, and with hotels in Netanya, Beersheva, Haifa and more on the way, the Libyan- born business magnate is more than half-way there.“The idea was to be international,” architect Elinor Chayoun, practical engineer and project manager of the hotel said of the renovations coinciding with the split with Hilton.Losing the Hilton brand name has not impaired the popularity of the landmark hotel, whose rooms were completely booked for Passover weeks ahead of the holiday and nearly completely booked for the second day of Yom Tov as well.Due to the hotel’s extended period of prominence in Eilat, hotel Manger Mickey Schneider is confident that the Queen of Sheba name can stand on its own.“When you told a cab driver, ‘Take me to the Hilton,’ they didn’t always know where that was. But if you say ‘Queen of Sheba,’ they know exactly,” he told a group of reporters upon arrival.“This is a significant time for us. Over the last two years we have come a long way to ensure the comfort of our guests above all else,” he added.In the lobby, for example, courtesy of renowned Israeli interior designer Daniel Hasson, the busy multi-colored carpet is gone and was replaced by a monochromatic synthetic material made in Sweden.The stiff black and white chairs are out and sleek armchairs in yellow, gray and blue are in. The decor’s intention is to represent both the desert and sea surrounding Israel’s southernmost city.But the biggest face-lift occurred in its rooms, where the motto “less is more” wins the day. The room style is minimalist and modern – soft gray leather headboards and crisp white sheets on the bed immediately catch the eye.With an inner bedroom, kitchenette, sitting area and large bathroom, the Junior Premium Room may be a bit crowded for the family of five the hotel says can be accommodated, but a couple or small family of three can certainly feel like royalty during their stay.As a couple, during our stay in one of those premium rooms, the hotel managed to do what a great hotel does best: make one feel pampered and at home.Across the board, the service was impeccable, especially from one eager-to-please American oleh who happily regaled us with his life story that must be heard to be believed.These upgrades are just the tip of the iceberg, though. The hotel plans to move its executive lounge from the 8th to 12th floor, launch a new restaurant and expand its already opulently decorated synagogue.You also won’t go hungry at the Queen of Sheba. Its kosher flagship restaurant, Chicago, is a meat-lover’s dream, with foie gras, various cuts of beef and beef carpaccio all on offer. Its parve desserts are also outstanding – an airy lemon meringue mini-pastry, chocolate soufflé and creme bruele were all an excellent way to top off an extremely decadent meal.Everything about the establishment, in fact, was pleasantly heavy. Even its wine glasses were heavier than usual, making Chicago no place for lightweights.Its breakfast buffet was equally impressive – smoked salmon, various quiches and salads adorned the credenzas in their Makeda restaurant. Their cheese selection, filled with cheddar, Gouda, Roquefort and Brie, will leave even the most avid cheese-lover satisfied.Of course, no establishment is perfect.The minuses, however, were few. Mostly, the hotel suffers from a major signage problem – I didn’t really know what cheese I was eating until it entered my mouth and finding certain locations in the hotel was not so easy.Luckily, the friendly staff was on hand to mitigate that. Also, luxury does not come cheap. A one-night stay in our upgraded room will run around NIS 1,200- to 1,700, and access to its fancy executive lounge with wine, beer and hors d’oeuvres will set you back around another NIS 150 per day if you didn’t purchase an executive package with your room (it’s totally worth it, though). A Swedish massage is NIS 340 for an hour.Rooms that have not undergone the facelift yet (but are perfectly pleasant) are cheaper – with prices starting at NIS 800, but for an indulgent weekend in one of the most tranquil cities in the country, it’s worth every agora.The writer was a guest of the hotel.Queen of Sheba Hotel 8 Antibes St.Eilat, 88510 Phone: (08) 630-6666