The picturesque Ukrainian city opens an Israeli honorary consulate in an effort to promote tourism. 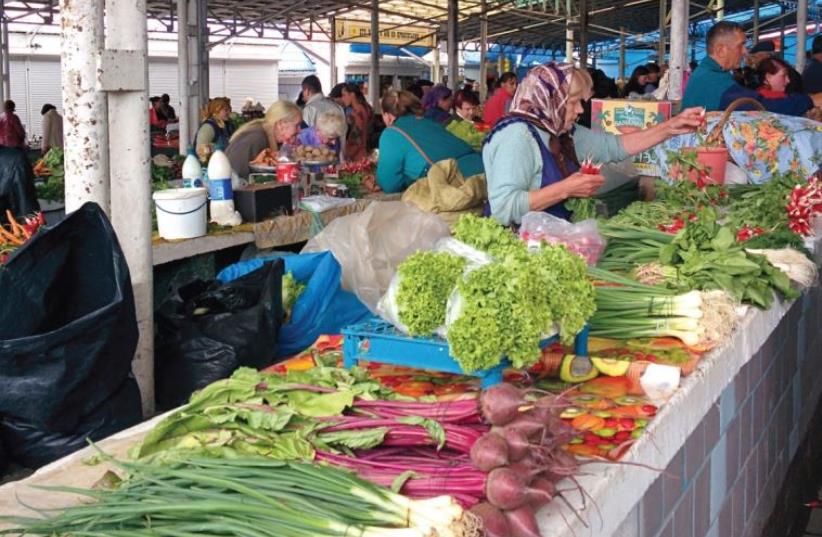 THE KRAKOW MARKET is one of the many attractions in Lvov
(photo credit: MAYA PELLEG)
Advertisement
The conflict between Ukraine and Russia seems far away in the western Ukrainian city of Lvov.Walking around the historic city’s central square makes you forget where you are in the world. The beautiful, age-old architecture, shops, restaurants and plenty of nightspots typify a metropolis filled with cultural activities – and for Israelis, an inexpensive and enriching getaway.Located in Galicia, Lvov has been an important center of Ukrainian nationalism and patriotism.Before World War II, its Jewish community was influential and thriving – the third-largest Jewish population in the area. Walking through the city center in the old lot that used to house the main synagogue in pre-Holocaust times, one can sense what was lost and destroyed, but also what has remained for the 3,000 Jews who stayed to rebuild.Jewish tourism in Ukraine usually centers on the annual pilgrimage to Uman around Rosh Hashana, to visit Rabbi Nachman of Breslov’s tomb – but both Ukrainian and Israeli officials are hoping to change that, by promoting Lvov as an attractive destination for Jewish people from around the world.“The relationship between Israel and Ukraine is warm and kind. There is a historical dialogue between the countries, since Ukraine holds the second-largest Jewish community after France,” noted Eliav Belotserkovsky, ambassador to Ukraine, at the inauguration last month of Israel’s Honorary Consulate in Lvov.“One of our missions is to assist the community here; the mayor and other government officials are already working on many projects,” Honorary Consul Oleg Vyshniakov detailed.The first thing the honorary consulate has accomplished is launching a weekly direct flight from Tel Aviv to Lvov, operated by Ukrainian International Airlines – with departing flights leaving Ben-Gurion Airport on Wednesday evenings and return flights leaving Lvov Wednesday afternoon. Previously, visitors had to fly to Kiev and take another internal flight. The consulate also provides travel information, cultural suggestions and direct connections to the Jewish community; and organizes various events, such as a travel fair to show all the possibilities Lvov has to offer.A second project is the city’s plan to renovate and create a memorial center that will commemorate Lvov’s Jewish community of yesteryear.The planning of the memorial was developed in a competition for young architects; the new area will be designed in an urban composition and will be adapted to Lvov’s future needs.But for visitors, it’s the old Lvov that provides the charm. Start with a walk around city hall; visiting the high tower within will reveal a breathtaking view 40 floors up. Costing only 10 hryvnia (NIS 2), it’s worth every step.Around Lvov, you can find everything you will need to enjoy your stay – flea markets, a chocolate factory and a beer brewery. One of the city’s many bazaars, the Krakow market, offers everything from food and clothing to toys and locally grown organic produce. Walking around the market feels like going back in time; the women who sell the vegetables and cheese are traditional farmers and have the classic Eastern European look to go with it.But with its location next to the old ghetto where thousands of Jews used to live, the past is never very far away. Anti-Semitism still exists everywhere in Lvov, as in the rest of Europe. It’s not being helped by the political situation and conflict with Russia, but according to Jewish community members, they do not feel threatened.With the Jerusalem-Kiev connection strengthened via the Lvov project, the Israeli presence in the country should continue to grow.The writer was a guest of Israel’s Honorary Consulate in Lvov.