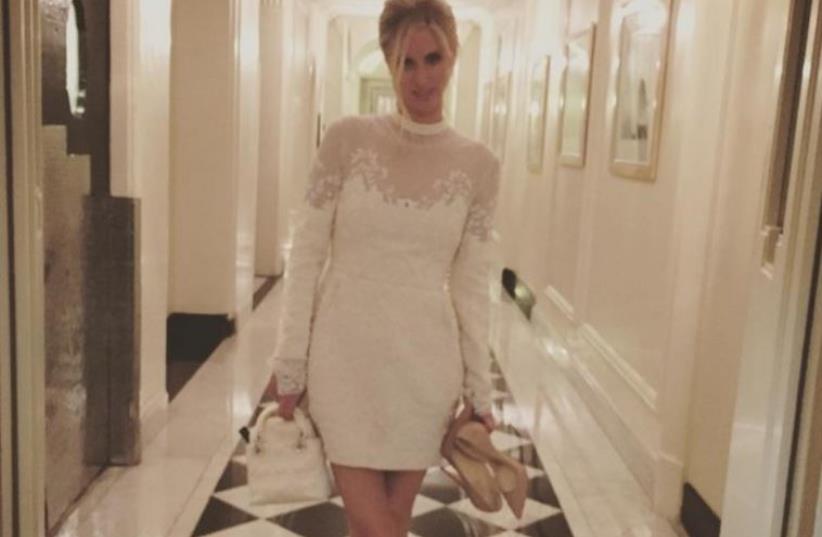 Nicky Hilton on her wedding day
(photo credit: INSTAGRAM SCREENSHOT)
Advertisement
Congratulations are in order for hotel heiress Nicky Hilton. Or maybe we should say “mazel tov.”The 31-year-old sister of Paris Hilton got married on July 10 to Jewish banking heir James Rothschild, 31.The Rothschild family has a long history with Israel, with patriarch Edmond de Rothschild being one of its better-known members. The Frenchman is credited with helping to create the state of Israel and was a big supporter of Zionism. Most notably, Rothschild Boulevard in Tel Aviv and Rothschild Street in Rishon LeZion are named after him.

Sending all our best to Nicky Hilton on her marriage with James Rothschild wearing a custom made Valentino #HauteCouture gown.
A photo posted by Valentino (@maisonvalentino) on Jul 11, 2015 at 1:39am PDT


Hilton wore a custom-designed Valentino Haute Couture gown and custom-made Louboutin heels at the nuptials, as flaunted on her Instagram account.


The ceremony was held at Kensington Palace in London, which is home to members of the British royal family.Though marrying into a Jewish family, the food served at the wedding was definitely not kosher as the entrees included choices of crab and lobster.The couple is now on their honeymoon in Botswana, according to US Weekly.