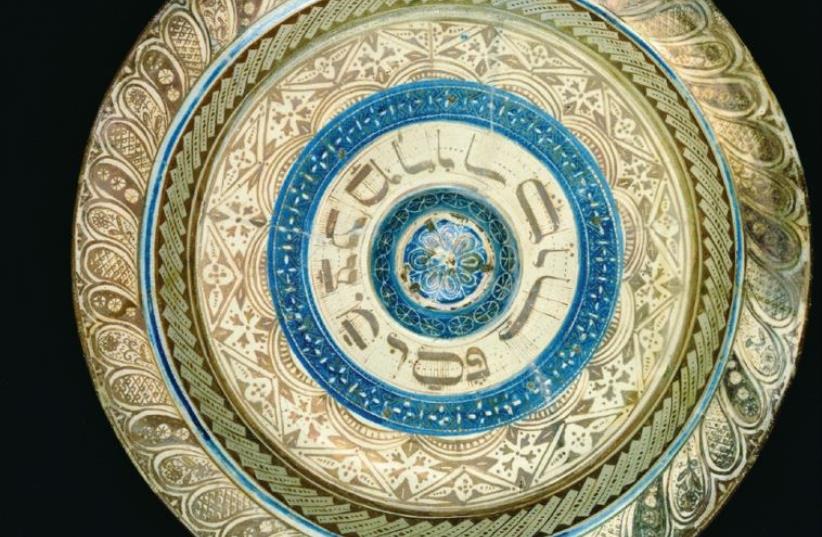 Spanish ceramic Seder plate
(photo credit: THE ISRAEL MUSEUM)
Advertisement
■ IT’S THAT time of year again when singles are wondering if anyone will invite them to a Seder. Those who miss out on invitations know that they can always join in a Seder conducted by their local Chabad director, but for those who are hesitant about going to Chabad, there are other options.Young adults in their 20s and 30s can not only enjoy a community Seder led by Rabbi Shlomo Chayen, but can also network and make new friends and employment connections.Lone soldiers will be accommodated free of charge. Other participants pay NIS 150 each. The address is 126 Ben-Yehuda Street, Tel Aviv. The date is Monday, April 10, and the time is 7:30 p.m. The RSVP, to www.126BenYehuda.com, must be in advance, with the payment via Paypal.
■ CELEBRITY CHEF Yonatan Roshfeld, who was well known to certain sectors of the Israeli public before he became a television star and a member of the MasterChef Israel team, which includes Eyal Shani, Haim Cohen and Michal Ansky, has decided to part company with the Keshet production that is seen on Channel 2.His place will be taken by Yisrael Aharoni, who was one of Israel’s first celebrity chefs.There were well-known chefs before him, but their fame was gained through newspaper columns and cookbooks. Aharoni was one of the first, if not the first, to have his own TV show. He went to Taiwan to study Chinese cuisine and opened a highly popular Chinese restaurant in Tel Aviv. He also ran a French restaurant, and in his spare time worked as a DJ. After publishing several books and hosting or participating in several TV shows, including very expensive productions that entailed travel abroad, Aharoni was persuaded last year to open a ramen bar in the Sarona Market. His popularity is not only in the quality and variety of his food, but the relish with which he eats new dishes, both in restaurants and in private homes. Just watching him makes one’s mouth water.Roshfeld has had a run of bad luck, caused in no small measure by cutting his ties with the Strauss siblings Adi and Irit, proprietors of Adi’s Lifestyle, who own the Herbert Samuel restaurants in which he made his reputation, as well as the restaurant in the Alma boutique hotel, which they closed. Although he has done better for himself with Captain Curry in the Sarona Market, which specializes in Indian fare, the past year and a half has not been the best in Roshfeld’s life.Known as one of the tougher judges on MasterChef, he has wanted for some time to leave the show. In the past, Aharoni has been reluctant to serve as a judge on any reality cooking show, but presumably he was made an offer that he couldn’t refuse. Most recently he was seen touring the food world with Gidi Gov in a show aired on Channel 10. It is doubtful that he will be able to appear on both channels 2 and 10 in the same season.
■ CHILDREN WITH learning difficulties come from all sectors of society, because the difficulties have nothing to do with social or economic status but with the way that the child’s brain works.In more affluent circles, children are taken to therapists, who are often able to help them overcome the problem, but in needy families there’s never enough money for the therapist. It is for such children that EZRA in Haifa exists. EZRA is having a gala fund-raiser at Zappa in Haifa on Sunday, March 26, with singers Miri Mesika, Natan Goshen and Harel Skaat.
■ HAND IN Hand, the organization started by Holocaust survivor and former Tel Aviv city councillor Shelly Hoshen to provide nourishing meals for children from low-income families, is in danger of closing down.In the past, according to Hoshen, the Social Services Ministry provided funds directly to organizations such as hers, and matching funds were collected from various sponsors – but the money had to come from the government in the first instance. The ministry now sends welfare funds to municipalities to allocate as they see fit, and in the case of Hand in Hand, the Tel Aviv Municipality has other priorities and has made deep cuts in the allocation, which also means that less money is coming in via matching funds, and there simply isn’t enough to provide for all the needs.
Advertisement
Subscribe for our daily newsletter