Franco's star-studded celebration was part of the Hilarity for Charity organization's bid to raise money toward Alzheimer's research. 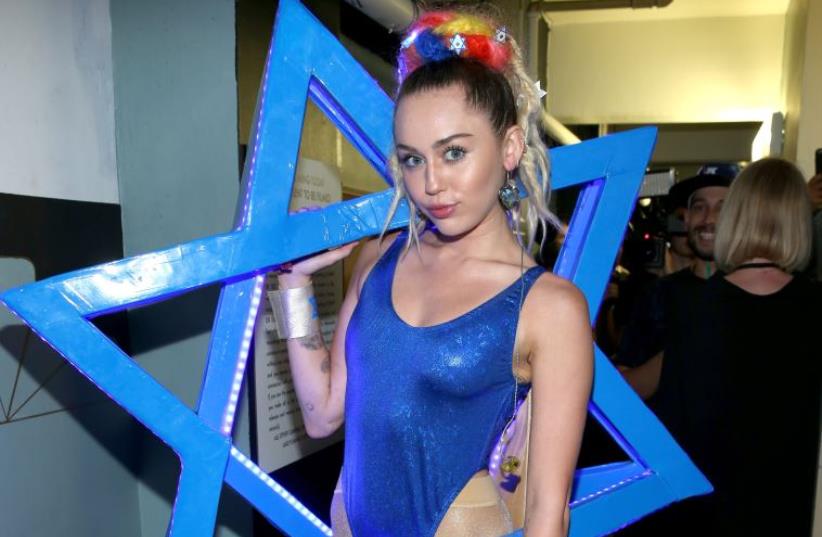 Miley Cyrus attends Hilarity for Charity's annual variety show: James Franco's Bar Mitzvah, benefiting the Alzheimer's Association
(photo credit: JONATHAN LEIBSON / GETTY IMAGES NORTH AMERICA / AFP)
Advertisement
In Judaism, having a bar mitzva signifies the important milestone when every Jewish boy agrees to take on the responsibilities of manhood. On Saturday evening, only 20-something years later than the average Jewish teen, James Franco became a man.Many famous Jews were there to welcome Franco to the tribe, including Seth Rogen and Sarah Silverman. Other honorary non-yids in attendance included Aziz Ansari, Bruno Mars, and most notably Miley Cyrus, who as per usual stole the show while wearing an outfit adorned with a giant Star of David.Franco's star-studded bar mitzva was part of the Hilarity for Charity organization's bid to raise money towards Alzheimer's research. This year marks the charity's fourth year celebration.No word yet if Miley Cyrus sang Hava Nagila to the barmitzva boy, but we can only hope.