Haneefah Adam was inspired to create her own Barbie fashion pieces after realizing that the Barbie Style Instagram account was missing the modest style worn by religious Muslim women. 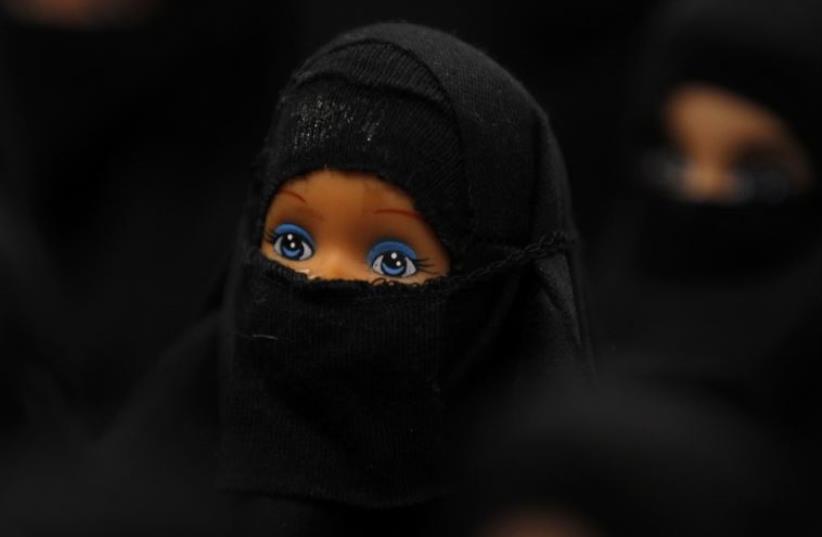 The installation 'Sheltered position' of German artist Sabine Reyer shows one hundred Barbie dolls dressed with burkas at the Ruhr-Biennale in Dortmund
(photo credit: REUTERS)
Advertisement
Amid a wave of diversification in the Barbie brand in which the company introduced a curvy Barbie, a tall Barbie and a petite Barbie, 24-year-old Nigerian student Haneefah Adam has introduced her own diversified version of the popular children's doll: Hijarbie.


Adam, while studying for her Master's degree in the United Kingdom, was inspired to create her own Barbie fashion pieces after realizing that the Barbie Style Instagram account was missing the modest style worn by religious Muslim women. In an interview with Mic, Adam said, "It got me thinking about how I'd actually like to see a doll dressed up like I would have — covered up.""When I got back to Nigeria, I went to the mall, purchased a doll, dressed it up, documented it and here we are."Adam designed and created the dresses and hijabs by hand and shared the photographs on her Instagram account @Hijarbie. Adam is now working towards launching a modest line of clothing called Hanie according to Mic.


It is important for young girls to recognize that modesty can be beautiful and trendy, Adam told Mic. "I want them to be inspired — this is about having an alternative and creating an awareness of having toys that adopts your religion and culture and in your own likeness, which at the end of the day, leads to an improvement in self-esteem," she said in the interview.