The "Shawshank Redemption" star did some soul searching while filming scenes for the upcoming National Geographic series "The Story of God," which looks at mankind's quest to understand the divine. 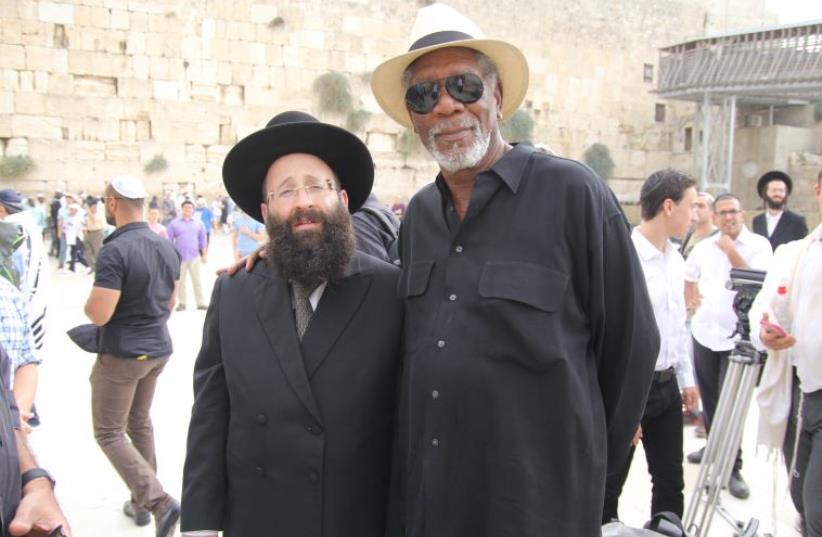 Morgan Freeman and Rabbi Shmuel Rabinowitz at the Western Wall
(photo credit: RAVHAKOTEL)
Advertisement
Hollywood actor Morgan Freeman paid a visit to Jerusalem’s Western Wall on Sunday as part of the filming of the new National Geographic documentary The Story of God, which looks at mankind’s quest to understand the divine.Freeman, who played God in Bruce Almighty and Evan Almighty, will visit the world’s religious sites, including India’s Bodhi Tree, Mayan temples and the Lakewood mega church in Texas and will travel with archaeologists to study long-lost religions.Israel was not the first or last stop in the Middle East for Freeman however, as he had just landed from Egypt where he also shot scenes for the series in important historic landmarks in Cairo such as the Pyramids of Giza, as well as significant heritage sites in Luxor.“The story of God is one of the greatest mysteries and most important ideas in the world,” said Freeman. “For me, this is a personal and enduring quest to understand the divine, and I am humbled by the opportunity to take viewers along on this incredible journey.”The series will air on America’s National Geographic Channel and Nat Geo Mundo networks in 2016.