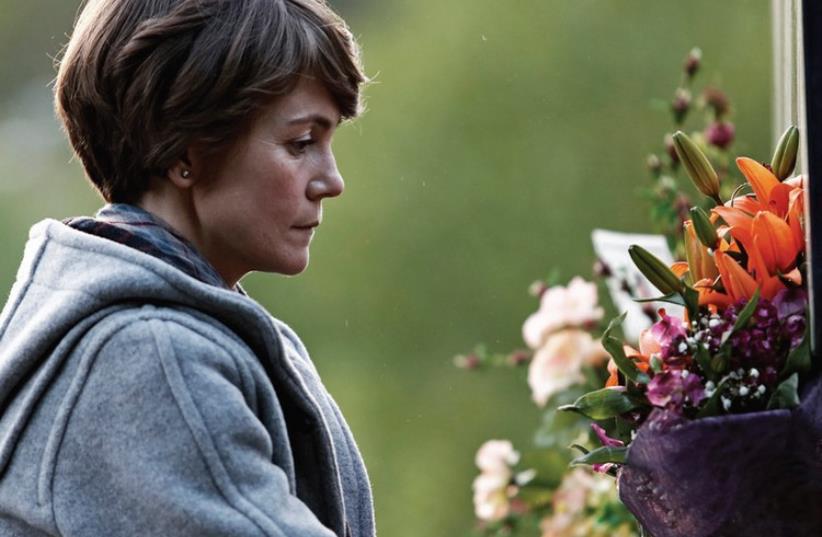 The film Loreak (Basque for “flowers”) is a delicate, quiet drama about how one element in life, in this case a gift of flowers, can touch and change many lives.The movie is set in the Basque region of Spain, but the story could take place anywhere in Europe or the world, for that matter. However, the Basque language, rarely heard on screen, gives it a slight exoticism. Basque doesn’t sound quite like any language. At times, it is similar to Romance languages, at other times it sounds more like Turkish, Portuguese or an Eastern European language.Loreak opens with Ane (Nagore Aranburu) learning that she has started menopause early. The quiet, modest Ane barely reacts.With her short hair, sensible clothes and no-nonsense attitude, she simply takes in what the doctor tells her. She works as an office manager at a construction site and is in a long-term relationship with Ander (Egoitz Lasa). They have no children, and she never mentions whether her early menopause affects any plans to have a child.But then she receives a lovely flower arrangement. Naturally, she thanks Ander, but he says he didn’t send it and scoffs at the idea that he would have: “For what?” he asks. Of course, both he and Ane are curious about where the flowers came from.Ane’s curiosity grows even more intense when, a week later, another bouquet arrives. Ander is upset and quizzes her about who she thinks sent them. But Ane truly doesn’t know, although she can’t help but be pleased — who wouldn’t be? Every Thursday they arrive like clockwork, delivered by a guy from a florist shop. But although Ander and Ane try to investigate, the florist can’t give them any clues and is puzzled by why they care so much about the sender’s identity. After all, they’re just flowers.But, as Loreak shows, they are much more than just flowers.After the story gets to this point, it shifts focus to Ane’s co-worker Benat (Josean Bengotxea), who operates the crane at the construction site. He is married to a young, sexy woman, Lourdes (Itziar Ituño), who works at a toll booth. She dotes on her son from a previous relationship but doesn’t want children with Benat. This brings her into conflict with his strong-willed mother, Tere (Iztiar Aizpuru, who won several Best Supporting Actress awards from European film festivals for her performance). Benat is caught in the middle and is stressed out.Arguing on his cell phone with his mother while he drives, he gets into an accident and is killed.Ane’s flowers stop arriving, and the tables are turned: She begins to bring flowers to the spot where he died. The appearance of fresh flowers every week mystifies and worries Lourdes, who is concerned that he may have been having an affair.The simple act of bringing or giving flowers connects the two families and highlights some of the underlying problems and weaknesses in their relationships.The flowers are an obvious symbol for the lack of romance and gentleness in Ane’s relationship with Ander and Benat’s with Lourdes.These flowers bear a heavy symbolic weight, and the film is shot in washed-out color, where the flowers are the only spot of brightness. But the obviousness of this symbol is redeemed by the fact that the directors don’t resolve everything neatly. The story is complicated, messy and often heart-breaking.The performances make this movie. All the actors are good, and Nagore Aranburu is especially lovely as Ane. You can understand how someone would fall deeply in love with her, in spite of her reserve – or perhaps because of it.Itziar Aizpuru brings dignity and strength to the role of Benat’s mother, and Itziar Ituno takes what could have been a clichéd role — the bitchy wife — and brings it to life.This slow-paced movie is not for everyone, but it’s a wonderful antidote to those inane Hollywood rom-coms, where nothing feels real and everything always works out perfectly.
Advertisement
Subscribe for our daily newsletter