According to the daily newspaper Nairobian, the object of a Kenyan lawyer's affections is none other than President Barack Obama’s daughter, Malia. 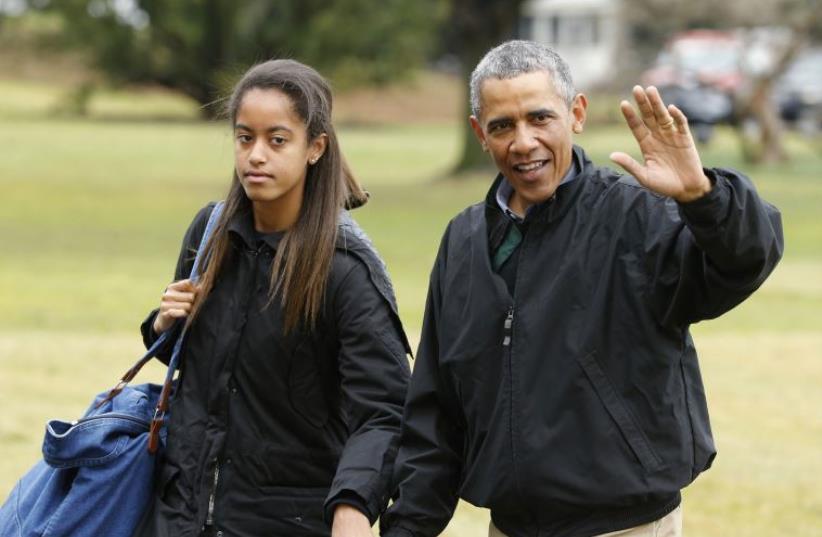 US President Barack Obama (R) and his daughter, Malia
(photo credit: REUTERS)
Advertisement
Felix Kiprono is in love, and the young Kenyan lawyer is aiming high.According to the daily newspaper Nairobian, the object of Kiprono’s affections is none other than President Barack Obama’s daughter, Malia.Just how far is Kiprono willing to go to snatch the girl of his dreams? According to the Nairobian, he is prepared to offer the leader of the free world a dowry of 50 cows, 70 sheep, and 30 goats."People might say I am after the family's money, which is not the case. My love is real," Kiprono told the Nairobian newspaper.Just how smitten is Kiprono with Malia Obama?"I got interested in her in 2008," he said. "As a matter of fact, I haven't dated anyone since and promise to be faithful to her. I have shared this with my family and they are willing to help me raise the bride price."He said he plans to deliver a letter to the US Embassy in Kenya to officially declare his intention."Ours will be a simple life. I will teach Malia how to milk a cow, cook ugali (a starchy dish) and prepare mursik (a sour milk) like any other Kalenjin woman," he said.The Kalenjin are "a Nilotic ethnic group inhabiting the Rift Valley Province in Kenya," according to Wikipedia. "They are estimated to number a little over 4.9 million individuals as per the Kenyan 2009 census."