The matter of the existence of God is not up for discussion. It is a presupposed fact. Israel’s God simply exists. 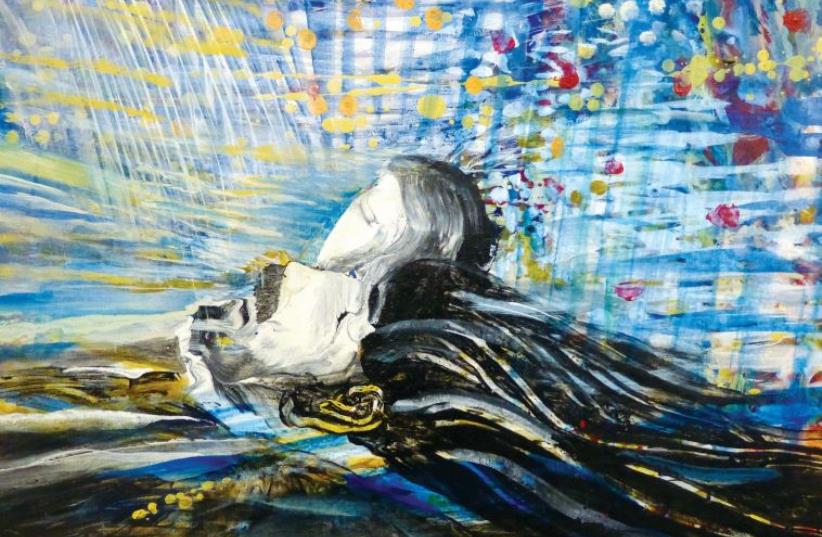 Painting by Yoram Raanan
(photo credit: YORAM RAANAN)
Advertisement
“And the Lord God caused a deep sleep to fall upon man, and he slept, and He took one of his sides, and He closed the flesh in its place. And the Lord God built the side that He had taken from man into a woman, and He brought her to man.” (Genesis 2: 21-22) Painting by Yoram Raanan; www.yoramraanan.com; www.facebook.com/RaananArt

‘In the beginning God created the heavens and the earth.” With these simple and elegant words the Torah makes a disruptive claim on the minds and souls of both ancient and modern man. The words are so pregnant with meaning by both what they say and what they omit.Notice that the matter of the existence of God is not up for discussion. It is a presupposed fact. Unlike the cosmogonies of other people of the time, Israel’s God simply exists.That idea is just as radical today as it was when it was first introduced. While other creation myths begin with long convoluted stories of how the gods came to be, ours just is. In fact, only when you study those other myths do you realize how startling and bold Genesis is.Others tell stories of the gods eating, drinking, fornicating and making war; ours is a mystery. We have absolutely zero knowledge of what it is exactly that God does save for His interactions with the world as we know it. There are no stories of how God fills his time, to whom he He speaks or hangs out with.The only pictures we are ever given by both the Hebrew Bible and rabbinic writing of God’s activities in heaven are always tied to His interaction with man. Sometimes God observes, other times He directs and blesses. Sometimes He even curses, and at least one time He is depicted as making a wager; but all of these pictures, even the bet, are of God’s concern for man.Even when the ancient rabbis once asked, “Now that the world already exists, what is it exactly that God does every day?” The answer given is that He makes matches between men and women for marriage.This cosmogony is unique and different from every other before it. It depicts a God who is focused on His relationship with human beings.This focus begins the overall theme of the Bible.It depicts a God who is at once transcendent and the “shadow of my right hand.” He is a God who “gives man speech; makes him dumb, deaf, seeing or blind,” champions the widow and orphan and still finds time to create the stars.Genesis comes to relay the fact of creation by God. It does not spend any time explaining how God did it. The glorious idioms of “God said” and “God made” are meant to both enlighten and conceal.The brevity of Creation and its six days highlight man as the pinnacle of God’s work, a little less than the angels. These six days are just the means to the ends of God seeking a relationship with man.The stage set up in Genesis for that relationship is universal, but with the failure of creating a real friendship with man as a whole, God refocuses His energy on just one man, Abraham. While this is a theurgic statement that will rattle the Aristotelian Maimonideans among us, it seems that the one thing a unum Deum lacked by His very definition was a friend.God’s choice of Abraham as His friend is a wise one, for God “knows that he [Abraham] will direct his children and household to keep the way of the Lord by doing what is right and just.” But the original goal was for all of man to be His friend.We are told that man was created in the image and form of God. Since God of course has no physical form, the image that is meant is of course intellectual.We are created in the mind-set of God.We have the capacity to understand, create and act godlike. The revelation that we are created in the image of God is an invitation to be like Him. Man rudely refuses the offer for 20 generations till Abraham, a man who shows his capacity to be God-like.God’s friendship with Abraham creates such a tight bond that it spills over into succeeding generations and is still the basis of our relationship with God. In many ways, this relationship “completes” God, and only upon its cementation in Parshat Lech Lecha does the “real story” begin. In many ways, one can look at Parshat Bereshit as the preface, Parshat Noah as the introduction and Lech Lecha as Chapter 1.This is why Judaism is not some platonic ideal. Nor is it philosophical in nature. It is tied to very specific acts in history. God speaking, commanding, rewarding and punishing are all attempts at creating and sustaining that relationship. It has been said before that Judaism cannot be separated from the story of the Jewish people. Converts to Judaism do not just join our faith; they join our people.When God revealed Himself at Sinai, He did not introduce Himself as the Creator of heaven and earth but as the One who took us out of Egypt.God’s choice of the Exodus as his moniker shows us that what’s important is not the universal big feats but the more personal ones that involve his relationship with the people of Israel.Modern man prides himself on figuring out the secrets and origins of the universe. This is what makes us Homo sapiens, Latin for “wise man.” By doing so he is fulfilling his mandate to conquer the earth. But he is not to forget that behind all the scientific discoveries, there is a God who started it all.This is why we read Genesis again and again. The more knowledge we get, the more powerful we become.The more powerful we become, the more God-like we are. The irony is that becoming more God-like leads us to forget Him and ignore our relationship with Him, which is the most important thing of all. Thus we read again this Shabbat of God’s creation of the world and the exhortation to have a relationship with Him.Let’s accept the challenge!Shabbat shalom The writer is a doctoral candidate in Jewish philosophy and currently teaches in many post-high-school yeshivot and midrashot.
Advertisement
Subscribe for our daily newsletter