Parshat Mishpatim: The form of the Torah

For the Torah to be inherited by succeeding generations, it would have to be treasured and understood by previous ones. 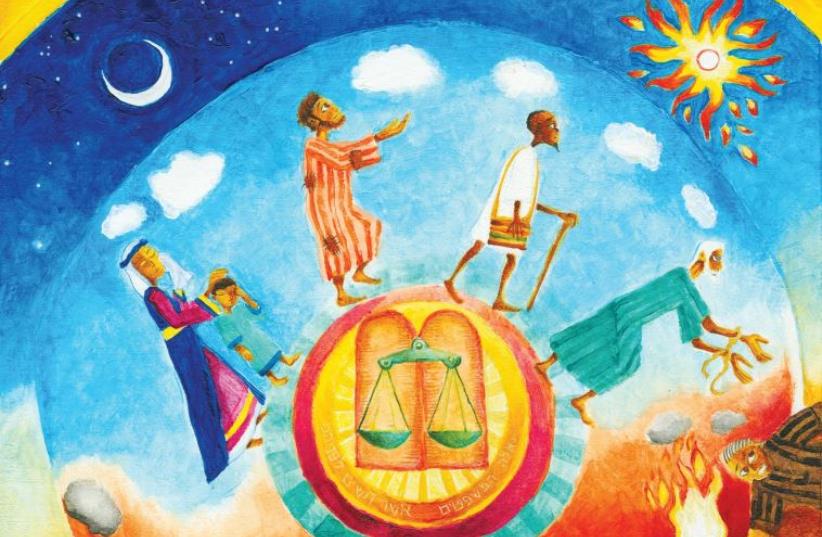 Illustration by Darius Gilmont
(photo credit: WWW.DARIUS-ART.COM/WWW.ARIELLA-VERLAG.DE)
Advertisement
‘If a man steals a bull or a lamb and slaughters it or sells it, he shall pay five cattle for the bull or four sheep for the lamb.’

Illustration by Darius Gilmont www.darius-art.com.In last week’s parasha we were told of the encounter with God at Mount Sinai. This week, we begin to delve into the content of His revelation, which is what we call Torah.The word Torah means “teaching,” and it is the goal of Torah to teach us about God, ourselves and about how the two relate to each other.The Torah as revealed to us takes the form of law, lore, narrative, history, poetry and moral lessons. But it is none of these. The Torah is not a history book, nor is it a biology textbook. Torah is theology and theology alone. It uses different genres to teach man the Covenant and his role in it.Mishpatim uses the genre of law and gives us one of our first introductions to Hebrew Law.The first question that we must ask when encountering these laws is whether the Torah is prescriptive or descriptive. Is the Torah trying to prescribe an ideal society? Or is the Torah simply speaking in the language and terms of the ancient Israelites who stood at the foot of the mountain? It would seem that God, introducing Himself to an early agrarian economy of former slaves, is introducing a form of legislation that spoke to them. Along with the choice of Hebrew as the language of revelation, so, too, God speaks using words and images that those people at that time would understand.When the verse says “If a man deliver to his neighbor an ass, or an ox, or a sheep, or any beast, to keep; (Exodus 22:9), the Torah could have easily substituted the word car, blender or iPhone. The Israelites, of course, would have had no idea of what God was saying, and Rashi would have had to add another of his “I don’t know” commentaries, while he, too, scratched his head.For the Torah to be inherited by succeeding generations, it would have to be treasured and understood by previous ones. Otherwise, for what reason would they bequeath this unintelligible document? God brilliantly chose the words He did for that generation and gave the Oral Law the fluidity it needed to take those laws in their ancient form and allow the rabbis to interpret them in new environments and circumstances. In this way the Torah, although speaking of asses, oxen and sheep, speaks just as much to us as it did to our fathers 3,300 years ago.One of the most fascinating aspects about our parasha is that God used the same wording for His Torah as that of another famous lawgiver, Hammurabi. Hammurabi called his code Dinat Meisharim, Laws of the Just. (And if you were able to translate that yourself, it is because Akkadian is a close cousin to Hebrew.) This should not be too surprising, as Abraham, the first Hebrew, emerged at the same time and geographical location as Hammurabi.The Code of Hammurabi is a strict secular law code that testifies not only to the high degree of civilization but also to the unchaste institutions that are taken for granted and regulated. Moral injunctions are absent, and sons are indeed punished for the sins of the fathers.Hammurabi’s Code was the most advanced of its time. And before you dismiss it as ancient and irrelevant, keep in mind that the US Supreme Court honors Hammurabi until today with a frieze as one of the great lawgivers to mankind.His law was a harsh reciprocal law, literally “an eye for an eye.” The law was practical, reasonable, and it worked. So brilliant and familiar to the ancient world is the law that the Torah itself sometimes lifts the very same succinct words of Hammurabi for its own purposes.According to Hammurabi if you build a house for a client and it caves in, killing someone’s son, the punishment was that your son would be killed; sons would be punished for the sins of the father. Now perhaps we can appreciate why the Bible goes out of its way to exclaim that in its law, that would no longer be the case.The reality is that if your goal is to set up a society “that works,” you probably don’t need God. But if you want to set up a moral society, you need to have God as the bottom line reason.There are at least four differences between Torah Law and Hammurabi’s Code.The first is origin. In other ancient law systems, the lawgiver was the king, and thus his law was man-made.Our law comes from God alone.The second is class distinction. Both the Egyptian law, from which the Israelites immediately emerged, and the Code of Hammurabi made clear distinctions between different strata in society. In God’s law, all are equal. So many laws were legislated about the institution of slavery that the Rabbis commented that one who has acquired a slave for himself has really acquired a master! Perhaps the most revelatory law in our parasha is the command to have “mishpat ehad,” one law. One law and equal treatment under it for the rich and poor, gentile and Jew, citizen and stranger. There is simply no parallel for equal treatment under the law in the ancient Near East.The third difference concerns man and God. Our law makes no distinction between civil and religious offenses. They all offend God.And the fourth and last distinction is a moral foundation.The laws of the other ancient societies were meant to keep people in their places and establish a civilized society. The Torah takes for granted that we are civilized; its goal is to make us ethical.A discussion about the differences between a civilized society and an ethical one can be a great topic for the Shabbat table. The writer is a doctoral candidate in Jewish philosophy and teaches at post-high-school yeshivot and midrashot.