We have reason to be optimistic - Ultimately, God will redeem us, with a redemption greater even than the Exodus. 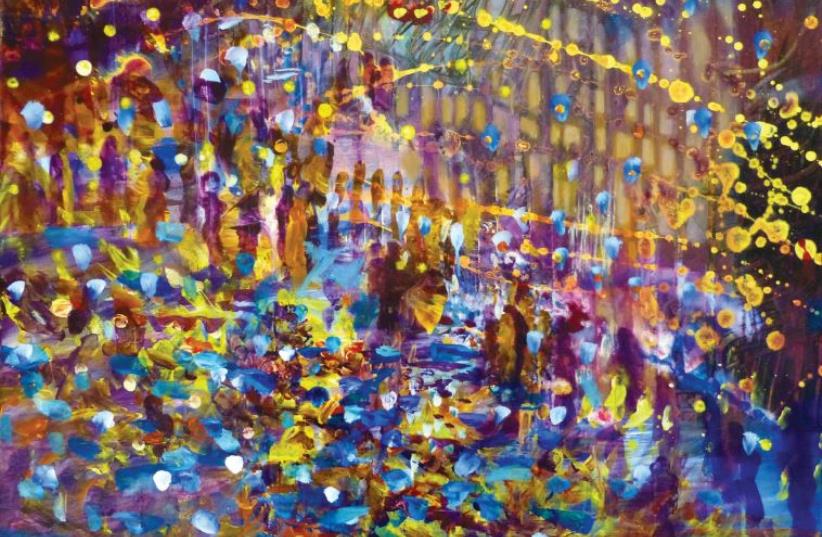 Painting by Yoram Raanan
(photo credit: YORAM RAANAN)
Advertisement
“And there was hail, and fire flaming within the hail, very heavy, the likes of which had never been throughout the entire land of Egypt since it had become a nation.” (Exodus 9:23) (Painting by Yoram Raanan; www.yoramraanan.com; www.facebook.com/RaananArt) God said to Moses, “I am the Lord. I appeared to Abraham, to Isaac and to Jacob as God Almighty, but by my name the Lord I did not make myself fully known to them.”How do people find faith in difficult times? Recently, at a dinner in Ra’anana I sat opposite an eloquent, intelligent and charming religious couple. Their apparent composure was testimony to their extraordinary faith, for these were the parents of Gil-Ad Shaer – one of the three Israeli teenagers kidnapped and murdered by Palestinian terrorists two years ago. Everyone at the table struggled to hold back their tears as they spoke of their 18-day ordeal and their ongoing grief for their 16-year-old son. Still, this young couple repeatedly called for positive thinking and spoke of their own determination to keep building a better Israel. Where do such people find faith? This week we return to the darkness of Egypt where the Jewish people are suffering enslavement, grueling work and humiliation. Moses’s first efforts to redeem them have been an unqualified disaster. Despite divine backing, he fails to secure their release, and their bondage is intensified with even more onerous work.Last week we saw Moses dogged by a sense of his own failure and the anger of his people. He was close to despair as he challenged God: “Why, Lord, why have you brought trouble on this people? Is this why you sent me? Ever since I went to Pharaoh to speak in your name, he has brought trouble on this people, and you have not rescued your people at all.” (Exodus 5: 21-23)This week’s parsha opens with God’s response. He promises that the redemption will come, and it will overshadow all previous Divine interventions. But in relating this, the Torah employs a name for God which is usually reserved for moments when he delivers stern judgment. The Midrash picks up on this, suggesting Divine exasperation; while the all-powerful God is redeeming his people, Moses’s complaints are not appreciated.Rabbi Samson Raphael Hirsch, writing at the end of the 19th century, sees in God’s rebuke a call to faith.He points out that although God loved our forefathers and made many promises to them, their lives were marred by infertility and famine. God could have instantaneously intervened to solve these problems, but he held back, demanding patience from his people – forging us into a nation with free will, experience with suffering, and faith in God.Rav Hirsch’s message affirms that everything God does is for the good. We must accept that we play only a small role in the Divine plan to build a moral, ethical world. This faith is a great gift for those who have it, but it is not always easy, and many find it hard. We are hurt by the misery of the Jews in Egypt and we sense the continuation of that suffering through Jewish history to our own times. Moses’s question seems not only legitimate, but resonant with how we feel.For those tormented by these matters, it is the Lubavitcher Rebbe, Rabbi Menachem Mendel Schneerson, who comes to the rescue. He appreciates Moses’s need to question, and empathizes with his frustration. Moses’s brilliance, he says, brought him closer than any other human being to understanding the Divine.But even Moses’s intellectual relationship with God had its limitations. This made it hard for him to deal with painful situations that he could not explain. According to one view in the Talmud (Brachot 7a), Moses never understood why good people must suffer. Like many of us who are troubled by this problem, he questioned God – not to challenge, but to seek answers and draw closer to the Almighty.While empathizing with Moses’s frustration and admiring his determination to fathom the will of God, ultimately the Torah gives God the last word. Moses should not spend his life frustrated by his inability to understand everything about the Divine will. He must, says the Rebbe, move on, accept that not everything can be comprehended and draw on his spiritual resources to overcome the intellectual gaps in his relationship to the Divine.The Khaliver Rebbe is a hassidic leader and scholar who knows about suffering. In 1944, he was deported to Auschwitz, where he was experimented on by Mengele. As a result, he could never have children, and to this day he cannot grow a beard – a permanent scar of the horrors inflicted upon him. He explains that the reason why we cover our eyes, blocking out the light as we say the opening line of the Shema (our declaration of faith in God), is to affirm that even in the deepest darkness, we still proclaim our faith.My teacher, Rabbi Dovid Ebner, adds that as we shut our eyes, we block out harsh realities and focus on imagining the ethical and caring world that we must now strive to build.This is what I learned from Gil-Ad’s parents, Bat Galim and Ofir Shaer, with their courageous message of hope and unity. There are dark times in life, terrorism looms large, our fears are real and our questions heartfelt. That is inescapable. But we dare not allow ourselves to be paralyzed by evil. The Jewish people have a mission. For our own sakes, and for the sake of the world, we must think positively, take pride in Israel’s achievements and work hard to build a better world.As the Talmud (Brachot 12b) teaches us, we have reason to be optimistic. Ultimately, God will redeem us, with a redemption greater even than the Exodus. ■ The writer is the British United Synagogue’s Israel rabbi.