Rambo vs. ISIS, who will draw first blood?

Sylvester Stallone: "We have teams scouting Iraq and parts of Syria where ISIS have their greatest strongholds." 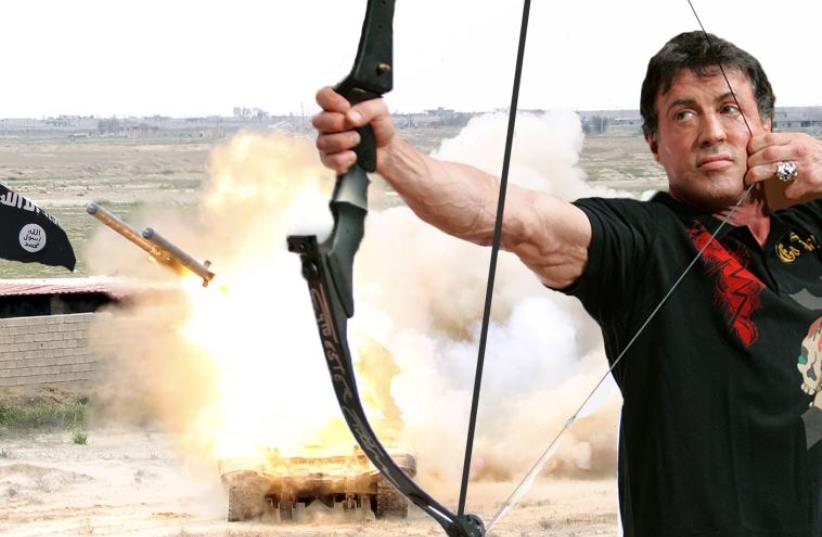 Rambo fighting ISIS.
(photo credit: REUTERS,JPOST STAFF)
Advertisement
Punching up the star-power at San Diego's Comic-Con on Friday, Sylvester Stallone made nerds swoon with talk of Creed, the newest installment in the Rocky film franchiseBut according to the Washington Times, Sly raised even more eyebrows after hinting at a new Rambo movie pitting the legendary Vietnam veteran against a scourge worse than communist jungle guerrillas, the jihadist desert terrorists of the Islamic State."We have teams scouting Iraq and parts of Syria where ISIS have their greatest strongholds," said the 68-year-old action icon, whose unannounced appearance at the convention changed topic after a fan asked about a follow-up to 2008's Rambo. "We're working with the locals there to help deliver the most intense and realistic Rambo movie experience ever," Stallone said, but failed to provide any more details before redirecting the conversation back to Creed. News that Stallone had begun work on a screenplay for a fifth Rambo film emerged last summer. The announcement, which included the title, "Rambo: Last Blood," also came with a statement that should make any fan of the commando series drop their bowie knife.“With Rambo V, Sylvester Stallone returns in his iconic role as John Rambo. This time he returns to the Middle East to battle the greatest threat facing the world today, global terrorism.”The Islamic State could not be reached to verify this report.