According to Jewish law, the area beneath a dofen akuma is not considered to be within the succa, and as long as the outcrop is less than four cubits, it does not invalidate the rest of the succa. 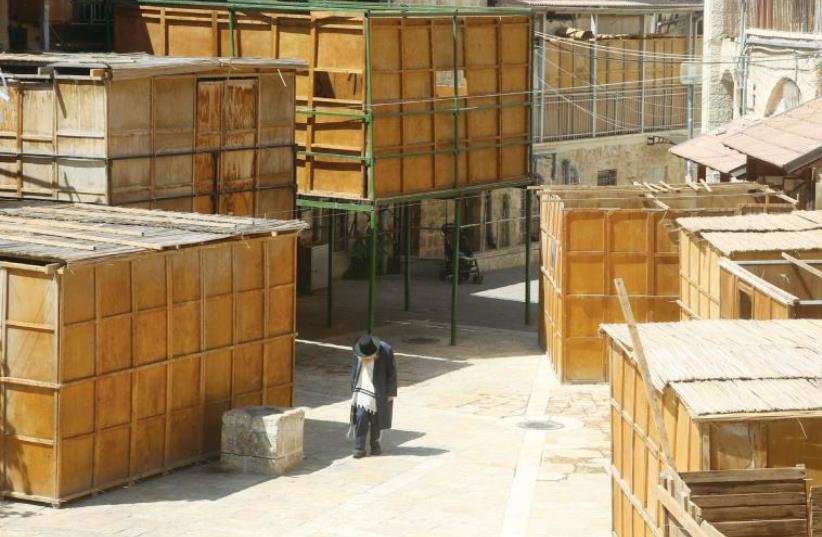 A man passes assembled succot in the ultra-Orthodox neighborhood of Mea She’arim in Jerusalem
(photo credit: MARC ISRAEL SELLEM/THE JERUSALEM POST)
Advertisement
We all have our favorite festivals, our most beloved customs, our pet rituals. For Rabbi Ya’acov Yosef of Ostroh (1738-1790) – or Reb Yeivi, as he was known – it was the festival of Succot and the mitzva of the succa. Indeed, Reb Yeivi would say that the mitzva of succa was unparalleled: Which other commandments do you enter, boots and all?! When building his succa, Reb Yeivi would spare no expense – he would even cover the muddy ground with floorboards. Moreover, he would not employ help from anyone; rather, he would purchase the materials and build the succa on his own, for under no circumstances did he want to share the opportunity to fulfill this beloved commandment.Once, one of his disciples saw him at the market carrying the s’chach covering for the succa. The student offered to carry it to his home. Reb Yeivi would have nothing of it, saying, “Why don’t you go to the shop and suggest to the shopkeeper that he leave his shop and you will receive all the goods in his stead?” But some of Reb Yeivi’s structural work in the succa was surprising.Specifically, he would make a point of constructing a dofen akuma. Literally a “bent wall,” this refers to a protruding overhang. According to Jewish law, the area beneath a dofen akuma is not considered to be within the succa, and as long as the outcrop is less than four cubits, it does not invalidate the rest of the succa.Clearly, there is no reason for a person to purposely build an overhang, so why did Reb Yeivi invest time, energy and, presumably, money in order to ensure that his succa had a dofen akuma? He simply explained that because the sages discuss the rules of a dofen akuma, it was reason enough for him to want to have one in his succa! Reb Yeivi was so committed to his succa that he would enter it at the beginning of Succot and remain there for the duration of the festival, not leaving until the end of the holiday. Even if it rained, he would not budge from his beloved succa.People pointed out to him that there was no obligation to remain in a succa during a downpour, and that the Talmud called a person who sat in the succa in the rain a hedyot, a simpleton. Reb Yeivi responded: “I want to be that person that the Talmud goes to the trouble of calling a hedyot!” In Ostroh, there was a popular debate as to what was the bes s’chach to use. One group, led by Rabbi Pinhas Shapira of Koretz (1726-1791), advocated reeds and bushes from near the lake. Another group, headed by Reb Yeivi, felt it was better to use trees from the forest.Reed and bush proponents pointed to the numerous flies that came with the forest trees, making the succa experience entirely unpleasant. Reb Yeivi countered: “Flies are drawn to the succa because of gossip and idle chatter, not because of the type of foliage used for s’chach.”Rabbi Pinhas was unconvinced. He once visited Reb Yeivi’s succa and, as he entered, he immediately pointed accusingly at a fly buzzing around. Could it be? Was Reb Yeivi speaking gossip in his succa? Reb Yeivi explained: “That fly came here in your honor, because you won’t admit that flies come because of gossip!” Rabbi Zusha of Annopol (1718-1800) once came to visit Reb Yeivi on Succot.When it came time to turn in, Reb Yeivi offered Reb Zusha a bed in the succa. Reb Zusha replied that he was fine sleeping on its floor. Reb Yeivi protested that Reb Zusha might catch a cold. Reb Zusha, however, was unmoved, and he lay down on the cold floor, with no blankets.Reb Yeivi lay down on his bed and snuggled up under a thick blanket. In a thin voice, Reb Zusha said: “Zusha is cold.” Suddenly, it was a little warmer in the succa.Again Reb Zusha piped up: “Zusha is cold,” and the succa got even warmer. Perspiring in his bed, Reb Yeivi threw off his thick blanket. A third time, “Zusha is cold,” and the succa became like a furnace. Reb Yeivi cried out: “Reb Zusha, what are you trying to do? Do you want to burn down my succa?!” In the year 1791, Reb Yevei expired with Succot. While lying sick in his succa on 21 Tishrei – the last day of the festival before the onset of the additional festival of Shmini Atzeret – he taught his students a final lesson on Psalms 53.Unexpectedly, Reb Yeivi digressed from the lesson, saying: “As long as I am fulfilling the commandment of succa, he has no power of me.” Reb Yeivi asked his students to move his bed and place it below the dofen akuma. His students, not fully understanding the implication of the cryptic request, hastened to do the bidding of their master. Alas, once out of the succa, Reb Yeivi died. ■ The writer is on the faculty of Pardes Institute of Jewish Studies and is a rabbi in Tzur Hadassah. He is currently a post-doctoral fellow at Tel Aviv University’s Faculty of Law.