Kim Kardashian: Would Armenian genocide-denying ad be printed if about Holocaust? 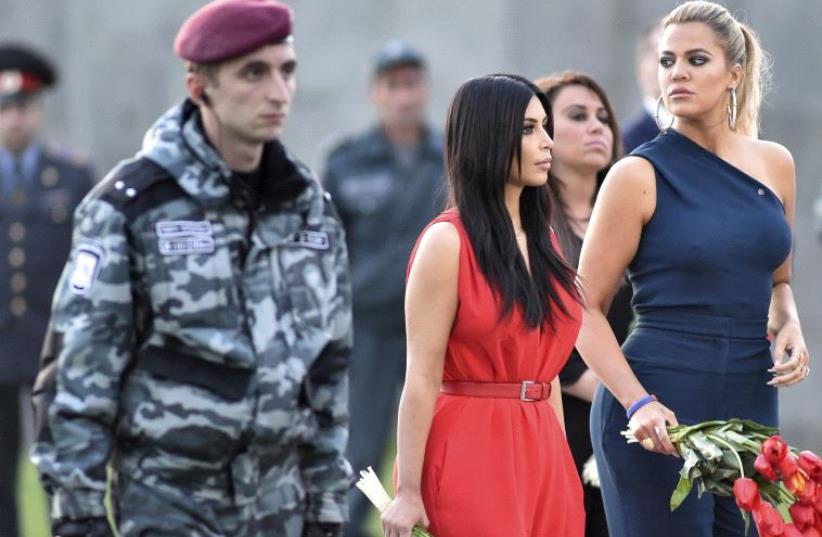 US television personality Kim Kardashian (C) and her sister Khloe Kardashian attend a flower laying ceremony at the Tsitsernakaberd Armenian Genocide Memorial Museum in Yerevan
(photo credit: REUTERS)
Advertisement
US reality TV star of Armenia descent, Kim Kardashian West, has recently placed an ad in the New York Times to hit back at an advert denying the Armenian genocide that was previously published in the Wall Street Journal. “For the Wall Street Journal to publish something like this is reckless, upsetting and dangerous,” she wrote slamming the April ad in the Wall Street Journal paid for by the Turkic Platform.The social media mogul's full-page ad printed Saturday was titled 'Genocide Denial Cannot Be Allow' and headed with the hashtag #straigtup.In her ad, paid for by supporters of the Armenian Educational Foundation, Kardashian dismissed the Wall Street Journal's explanation that it accepts "a wide range of advertisements, including those with provocative viewpoints."


Kardashian continued to accuse the Wall Street Journal of "spreading lies," asking "If this had been an ad denying the Holocaust, or pushing some 9/11 conspiracy theory, would it have made it to print?"The Los Angeles native visited her ancestral homeland in April 2015 to mark the 100th anniversary of the massacre of 1.5 million ethnic Armenians by the Ottomans in 1925. The term genocide has been rejected by Turkey, the successor state of the Ottoman Empire, as the accurate description for the mass killing."Many historians believe that if Turkey had been held responsible for the Armenia genocide, and reprimanded for what they did, the Holocaust may not have happened," Kardashian wrote.