A nearly 200-foot wide formation was mysteriously cut into an agricultural field in southwest England's Wiltshire county, according to UK media. 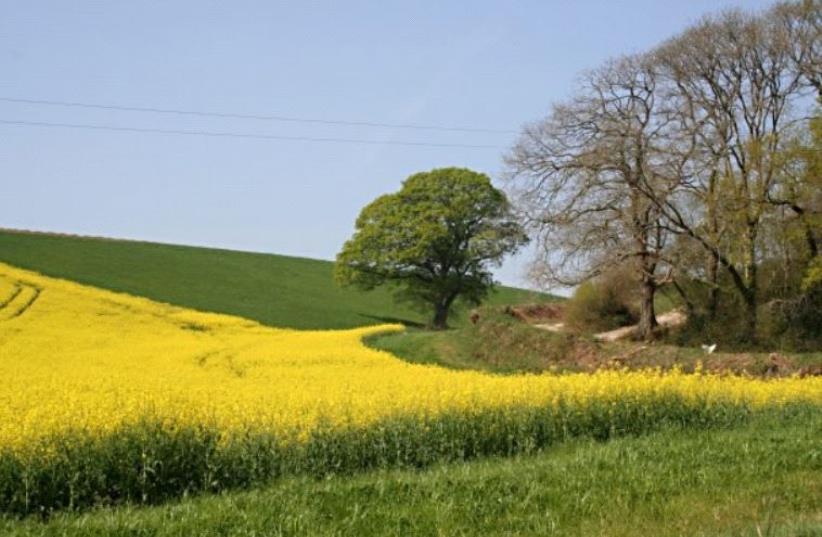 Pastoral British countryside [Illustrative]
(photo credit: WIKIMEDIA COMMONS/TONY ATKINS)
Advertisement
A gigantic crop circle cut in a swastika-like design that allegedly appeared in the British countryside has conspiracy theorists running amok with notions of Nazi and alien activity. According to British media, the nearly 200-foot wide symbol was mysteriously cut into an agricultural field in southwest England's Wiltshire county (the same region where Stonehenge is located). The farmer who tends to the field said he was shocked to discover the formation, adding that hadn't made it nor had he given permission to anyone else to do it, the UK's Daily Mail reported Wednesday.The crop formation featuring round-edged arms and dots between its lines is so large it can allegedly be viewed from a nearby road.
The British tabloid newspaper cited the field's farmer as saying he believed the formation actually represented the auspicious cross-armed symbol used by ancient Eastern religion, and not the Nazi adaptation of their infamous logo.The report also cited local megalithic researcher Hugh Newman who flew a drone over the crop circle as acknowledging that the symbol appeared to be the positive icon used in ancient Buddhism and Hinduism. "You get teams of hoaxers going around and doing crop circles without anyone's permission and if they get caught they can be prosecuted for it," Newman was quoted as saying. "But some of the circles they cut are so advanced and difficult to do that it is actually land art," he added.