By IDO KENAN
Shay Lesher, Tal Baba and Lipaz Shechter
(photo credit: ROOM404.NET)
Advertisement
It’s seven meters long, one meter wide, folds almost like a Torah scroll and has the entire Purim story embroidered on it, but you’ll find it hard to read. Four Shenkar College of Engineering and Design students made this machine-embroidered Megilat Esther in a bid to explore the concept of preservation, and of transferring information between media.The creators are third-year students Tal Baba and Shay Lesher of the Visual Communications Department and Lipaz Shechter and Avinoam Maman of the Industrial Engineering Department.They made the megila while attending a workshop called “Remake – conveying data and messages clandestinely and openly between material and texture,” a part of their academic institute’s annual “Concoction Festival,” an engineering and design faculties cooperation. 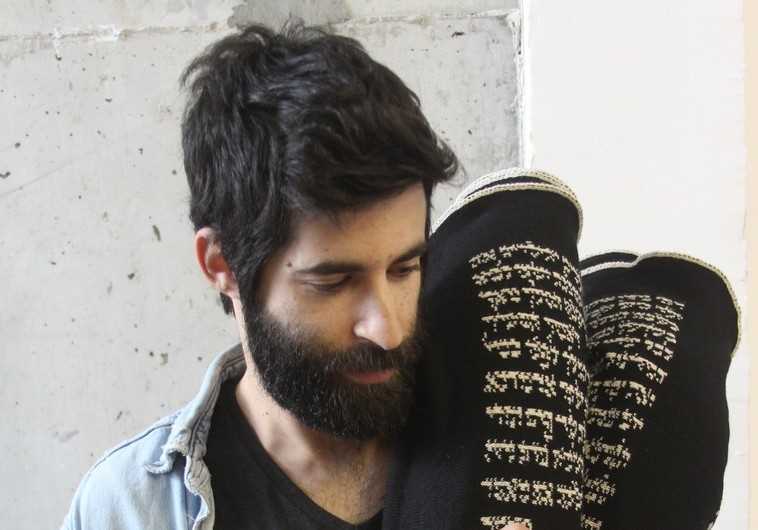 “Although the megila was allegedly expropriated by the kohanim and the religion and handed over to a format of mass production and to the masses, made accessible to the masses, it’s not about cheapening of the object,” said Avigail Reiner of the Visual Communications Department, who co-supervised the workshop with Dr. Eyal Sheffer of the Plastic Engineering Department. “It was interesting to see that the students respected the megila, and could not separate the emotions and their own traditional importance of the megila, they wouldn’t put it down or let anyone step on it, and from afar, you instantly realize it is the megila, even though it is embedded in the fabric.”“In this work we were asked to talk about a transference of images, how they are made one way and what happens to them when they’re embroidered. To talk about what is lost of the information and what is preserved,” said Shechter.It started with photos of a traditional Megilat Esther, painstakingly written by a scribe on parchment. Those were converted to a digital file in a format readable by an embroidery machine, which in turn embroidered the pixelated, unreadable text to the fabric to create the soft megila.Lesher explained that the pixelated letters are a result of the embroidery machine’s limited resolution. “As part of our concept, we chose letters that would be recognizable, when you stand at a distance of one to two meters away you can tell it’s ancient Hebrew letters, but as you get closer there’s an effect of information loss.”There’s a message there, explained Lesher, who compared the work to the illusion created by wearing a Purim costume: “When you look from a distance, you might mistake it for a megila or ritual object, but when you get closer you see it’s just a piece of fabric with dots embroidered on it. There’s nothing sacred, no religious article, just knitted strings. We liked the fact that it’s recognizable but unreadable, so when the viewers get closer, they don’t get an answer, but more question marks.”Shechter sees the megila’s gibberishness as symbolic.“You can call it a process of secularization. I can attest, about myself and people close to me, that each year we lose a different item of Judaism, it blurs, we know it exists, just like the megila, you can see it but not give it consideration, you prefer not to.”Ido Kenan is a digital culture journalist and blogger, Room 404 (Facebook, Twitter, Email)