The Carmelites exploited a variety of plants and animals for food, tool-manufacturing and building materials. 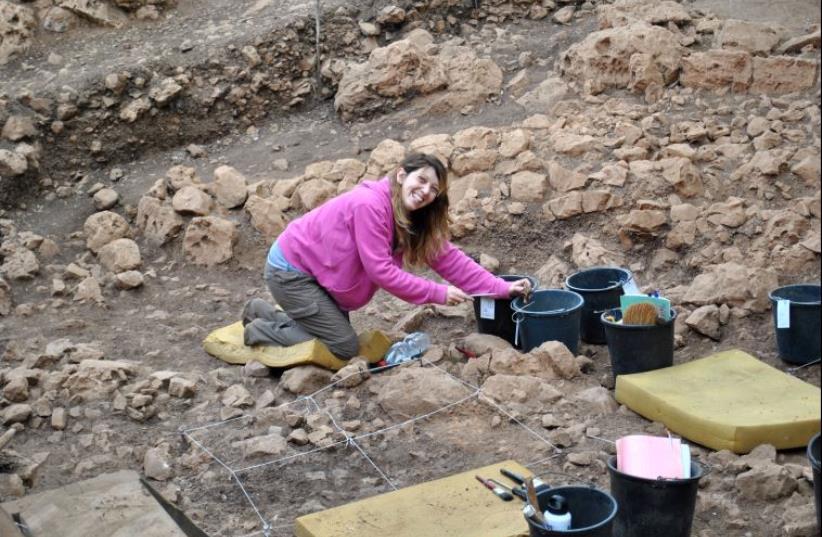 Excavating the Natufian hamlet at el-Wad, Nahal Me΄arot, Mount Carmel – A UNESCO World Heritage Site of human evolution, managed by the Israel Nature and Parks Authority.
(photo credit: R.YESHURUN)
Advertisement
JPost Holy Land is a new column that will bring you the latest archaeology news and stories from Israel in collaboration with the University of Haifa.
It was the poet Shaul Tchernichovsky who dubbed the famous saying: “A person is a mold of his environment.”Whether this was true for the Jewish settlers of the early part of the 20th century in Palestine when the poem was written is a matter of poetic freedom and audience interpretation. It certainly rightly describes the prehistoric inhabitants of Mount Carmel, whose footsteps I have followed for the last 35 years with growing enthusiasm, wonder and even a certain degree of humility. Especially relevant are the Carmel Natufians, hunter-gatherer groups on the threshold of the agricultural revolution, just on the verge of the point-of-no-return in the complex relationships between people and their environments (indeed “a person and his landscape”). They had established the first hamlets and seem to have achieved an admirable balance between landscape exploitation and sustainability, while clearly exhibiting and maintaining their Carmelite unique identity.   What makes them Carmelites? Every aspect of their daily lives. For example, they used local, high-quality (something to be proud about) flint raw-materials for knapping their stone tools and modeling small human figurines. They exploited a variety of plants and animals from the mountain and its adjacent coastal plain and beach, for food, tool-manufacturing and building materials. From iron-oxide veins in the carbonatic rock of the mountain they extracted their ochre that was probably used for hide tanning or as a constituent in adhesives used to mount minute flint crescents in composite projectile tools; naturally, it could have also served for body make-up and clothing/hide coloring. From the nearby stream and coast they collected a variety of molluscs, used for food but also as beads and pendants. The richly decorated burials bear testimony to what must have been commonplace among the living members of this intriguing human group. Beads were also made of animal bones, mostly gazelle toes – gazelles were the main hunted animals and main source of meat during the Natufian period. Their local-patriotism seems to be inherent in every aspect of their daily life and is strongly expressed in the way they may have exhibited themselves. If we could go back 15,000 years and explore the trails of Mount Carmel, we would probably encounter the red-cheeked people, with their gazelle toe-bone beads and the typical line engravings on bone sickle hafts, ornaments and art objects. As archaeologists, we are left to find, record and appreciate their expert, admirable, 'Carmelite' way.   Prof. Mina Weinstein-Evron is head of the  Zinman Institute of Archaeology, the University of Haifa, Israel.
Advertisement
Hot Opinion