The telegram that drove Hitler to suicide

The slip of paper found in Hitler's underground bunker sells at auction for $55,000. 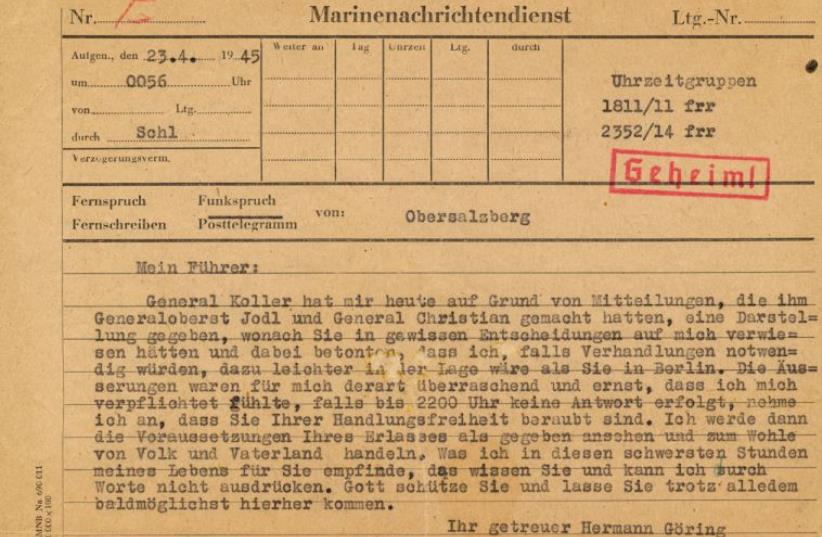 A telgram sent by Hermann Goering to Adolf Hitler on April 23,1945
(photo credit: ALEXANDER HISTORICAL AUCTIONS)
Advertisement
A telegram that may have affected the entire course of World War II sold in an auction for $55,000 on Tuesday according to reports by Taken from Hitler's hideaway bunker at the end of World War II as a souvenir by Capt. Benjamin Bradi, a non-German speaking American soldier, the significance of the slip of paper went unnoticed for years. Bradi's son found the telegram in his father's safe years later and wrote his senior thesis on the subject.  The telegram, sent to Adolf Hitler from his number 2, Hermann Goering, in the week leading to Hiter's suicide, read:

My Führer:    General Koller today gave me a briefing on the basis of communications given to him by Colonel General Jodl and General Christian, according to which you had referred certain decisions to me and emphasized that I, in case negotiations would become necessary, would be in an easier position than you in Berlin. These views were so surprising and serious to me that I felt obligated to assume, in case by 2200 o’clock no answer is forthcoming, that you have lost your freedom of action. I shall then view the conditions of your decree as fulfilled and take action for the well being of Nation and Fatherland. You know what I feel for you in these most difficult hours of my life and I cannot express this in words. God protect you and allow you despite everything to come here as soon as possible.    Your faithful Hermann Goering

According to the report, sources close to Hitler used this telegram to drive him into a rage. Hitler had previously designated Goering as his successor in the event that any harm should come to him. The text of the telegram indicates Goering was inquiring as to whether that line of succession still stood following Hitler's disappearance from the public eye. Hitler's associates drove him to see this telegram as an act of treason, assuming Goering had launched a coup d’eta. Hitler dismissed Goering from his position, stating that if the Nazi leader gave up his power, Hitler would allow him to keep his life.The report indicated that after his initial fury subsided, Hitler fell into a depressive state. Seven days later, on April 30, 1945 Hitler committed suicide in his bunker. The telegram was sold by Alexander Historical Auctions to an unnamed buyer in North America.