Tel Aviv native Denis Shapovalov defaulted at the Davis Cup for inadvertently blasting a ball into the umpire's face. 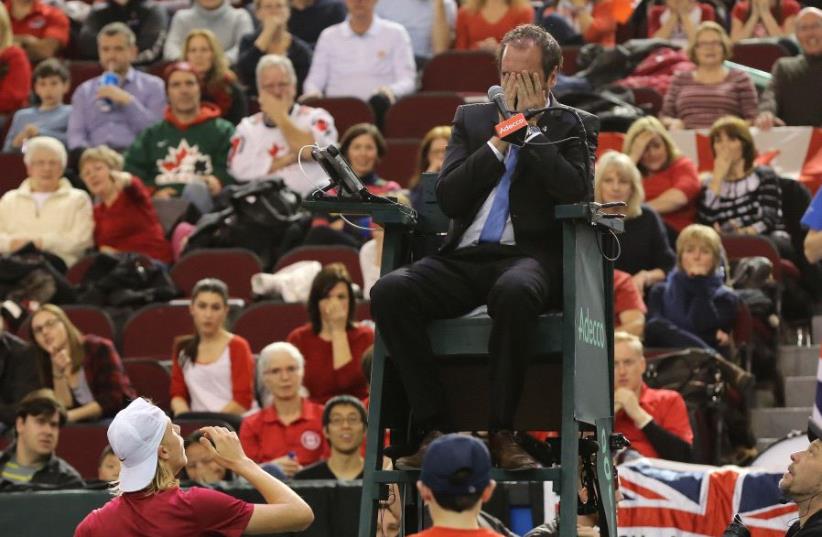 Denis Shapovalov (botton left) of Canada reacts after accidentaly hitting the head umpire Arnaud Gabas from France, during third set action against Kyle Edmund of Great Briatain on the third day of Davis Cup first round between Canada and Great Britain at TD Place in Ottawa, Ontario, February 5, 201
(photo credit: LARS HAGBERG / AFP)
Advertisement
Britain reached the Davis Cup quarter-finals in bizarre circumstances on Sunday when Israeli-born Canadian Denis Shapovalov defaulted for inadvertently blasting a ball into the umpire's face.Tel Aviv native Shapovalov, 17, had lost the first two sets against Kyle Edmund in the fifth and deciding rubber when he hammered the ball away in a fit of rage at 2-1 down in the third set.Although he meant to hit the ball into the stands, it flew straight into the left eye of umpire Arnaud Gabas.


The Frenchman iced the wound but could not continue and had no option but to disqualify Wimbledon boys' champion Shapovalov.Gabas was being taken to Ottawa General Hospital for a precautionary evaluation."No one is nicer or carries themselves better for a 17 y/o (year-old) than Shapovalov," tweeted his disappointed team mate Vasek Pospisil. "Everyone can see that today was an accident. Can happen to anyone."Edmund had taken the first two sets 6-3 6-4 and seemed on the way to victory in the third when everyone inside the arena was shocked by the sudden turn of events."It is a surprise what happened at the end there and it is a shame," Britain's captain Leon Smith told the BBC. "I feel for the young lad. He's a great talent and he has learned a harsh lesson."But Kyle, from what we saw on Friday to today, was fantastic. How he prepared, how he took command, his unbelievable serving and he kept pressure on the turns. It was a great performance."The win capped a fine comeback for Britain, who had come into the day leading 2-1 before Pospisil leveled the world group first round tie with a 7-6 6-4 3-6 7-6 win over Dan Evans.The victory means Britain will head to France for a quarter-final tie scheduled for April 7-9. Jpost.com Staff contributed to this report.