A Pepe cartoon released Saturday shows Matt Furie’s cartoon character in an open casket being mourned by other characters from his “Boys’Club” strip. 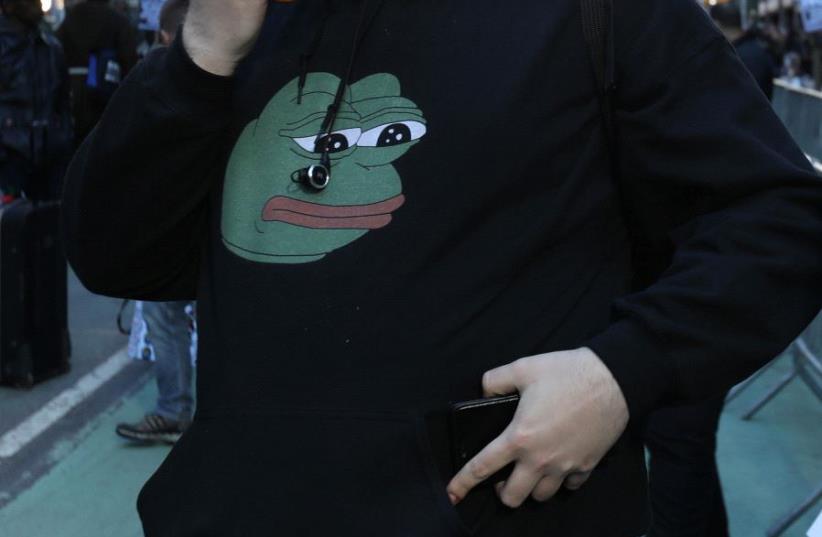 A man wears a Pepe the Frog sweatshirt
(photo credit: REUTERS)
Advertisement
Pepe the Frog, an online cartoon character whose image has been co-opted by antisemites and white nationalists associated with the the alt-right, has been killed off by his creator.A Pepe cartoon released Saturday shows Matt Furie’s cartoon character in an open casket being mourned by other characters from his “Boys’Club” strip that debuted online in 2005. The first printed version was released in 2006.

Pepe was portrayed as a stoner who did as he pleased, and frequently used the catchphrase “feels good man.”Twitter users leapt to Pepe’s defense, some saying the Internet meme would live on and others showing images of Pepe dressed as Jesus and writing “He is risen.”In September, the Anti-Defamation League added Pepe the Frog to its online hate database. Images of the frog, variously portrayed with a Hitler-like mustache, wearing a yarmulke or a Ku Klux Klan hood, proliferated in hateful messages aimed at Jewish and other users on Twitter in the weeks leading up to its inclusion in the online hate database.

"Pepe the Frog" is used by the Alt Right as a symbol of bigotry, so we added it to our hate symbols database --> https://t.co/U2VFuyG3OH pic.twitter.com/YqaxszVsoQ

“It’s completely insane that Pepe has been labeled a symbol of hate, and that racists and anti-Semites are using a once peaceful frog-dude from my comic book as an icon of hate,” Furie said when the ADL announced the characters inclusion as a hate symbol. “It’s a nightmare, and the only thing I can do is see this as an opportunity to speak out against hate.”He said in a Time magazine essay that “Pepe is love.”Donald Trump Jr. stirred up a controversy last month by posting a photoshopped image of Pepe alongside himself and various Trump advisers in a caricature of ads for the movie “The Expendables,” but relabeled “The Deplorables” in the wake of a comment by candidate Hillary Clinton.