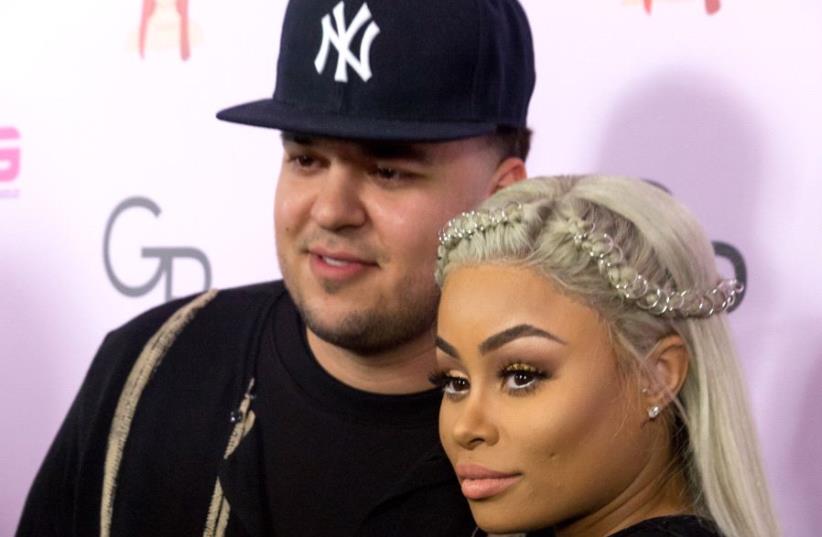 Rob Kardashian and Blac Chyna [File 2016]
(photo credit: GREG DOHERTY/GETTY IMAGES/AFP)
Advertisement
Rob Kardashian has hired one of O.J. Simpson's former defense lawyers, Robert Shapiro, to represent him in the wake of an explicit social media rampage that led the troubled reality TV star's former fiance, Blac Chyna, to seek legal action. Kardashian found himself in the middle of a heated legal battle after sharing nude photos without consent last week on Instagram and making lewd accusations against the mother of his eight-month-old daughter, Dream. Shapiro, one of the world's most recognized civil litigators, represented the Keeping Up With the Kardashians star in front of a judge on Monday and said his client did not seek to not fight Chyna, whose legal name is Angela White, in court as he had agreed to abide by the terms of restraining order sought by his on-and-off-again former flame.Shapiro, who is Jewish, was also reportedly hired to fight for temporary legal custody of the pair's infant.Kardashian's attorney told TMZ that his client regretted the cyber-bullying tirade, which the social media world dubbed "revenge porn."“Rob’s only concern is for the well-being of baby Dream,” he added. Shapiro worked alongside Kardashian's father, Robert Kardashian Sr. in the high-profile O.J. Simpson murder case in 1995.Meanwhile, Chyna has turned to the legal prowess of high-powered attorney Lisa Bloom, who is also Jewish and said on Monday that her client was granted everything sought in her petition against Kardashian. "As we have said all along, revenge porn is a form of domestic abuse," CNN quoted Bloom as saying. "It is also a crime in California and 38 other states."  Kardashian's Instagram account has since been deactivated from the social media platform. According to CNN, the next hearing in the case is scheduled for August 8.