Also offered for sale is the "Sheikh Fagin nose," described by retailer as being "perfect for an Arab Sheik." 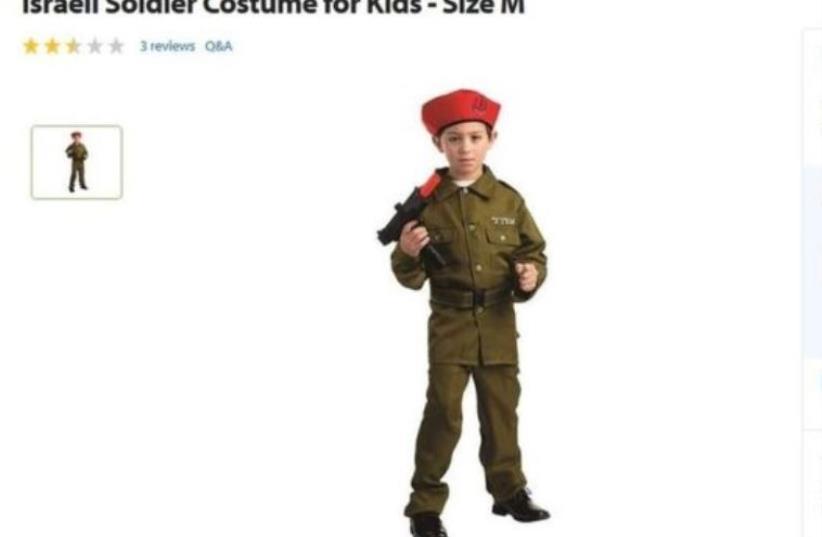 Walmart's IDF soldier Halloween costume
(photo credit: screenshot)
Advertisement
Gigantic US retailer Walmart has stirred controversy on social media by offering for sale a children's IDF soldier Halloween costume, the BBC has reported. The costume is available on the store's website for $27.44, according to the report. The BBC noted that the retailer has not yet reacted to the criticism. The sale of the soldier uniform comes at a time when violence has spiked in Israel. Eleven Israelis have been killed in attacks by Palestinians and fifty-five Palestinians, for the most part suspected terrorists, have been killed by Israeli security forces and Israeli civilians.  Another Halloween item for sale on Walmart's site that was stirring controversy was the "Sheikh Fagin nose," a large latex prosthetic nose described on the website as being "perfect for an Arab Sheik," the BBC reported. The British news outlet noted that the "large, hook-nosed appearance and the use of the name Fagin - referring to a character in Charles Dickens' novel Oliver Twist - appear also to play into anti-Semitic stereotypes." Fagin was often referred to in the Dickens' novel as "the Jew."

This Halloween, Walmart offers you either an Israeli soldier kid costume or an Arab sheikh hook nose costume pic.twitter.com/JtlmoS0HWp