WATCH: Balling with Bibi in Budapest

Benjamin and Sara Netanyahu visit Israeli champions Hapoel Beersheba ahead of next match in Hungary (credit: GPO)
Advertisement
Prime Minister Benjamin Netanyahu took time out of his diplomatic schedule in Hungary on Tuesday to pay a visit to Israeli League Champions Hapoel Beersheba, who were in town on a training camp ahead of a qualifying match Wednesday evening.Netanyahu and his wife Sara attended the team's practice in Budapest, where the players hope to find success against home team Budapest Honved in the qualifying round for the Champion's League."Good luck and many blessings. You are truly champions," Netanyahu told the players before engaging in some impromptu dribbling with the players. "It was important for us to come here and cheer on Hapoel Beersheba ahead of tomorrow's game. I hope they can repeat last week's result." 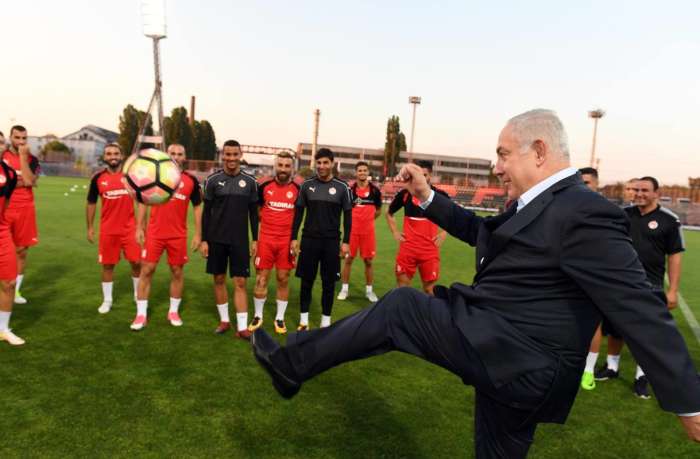 "I can already point out positive progress just based on the fact that I managed to kick the ball without tearing a tendon," said Netanyahu, referring to an instance in 2012, when he sprained his leg during a friendly Arab-Jewish soccer game. Hapoel Beershea is a rising star in Israeli soccer, winning the league title last month for the second time in a row.Netanyahu, who is Hungary for meetings with the country's leaders finished the visit by wishing the team well."In all these games, no one sees it simply as a game of a single team, rather the people of Israel showing up on the green field. I hope they succeed," said the prime minister.