Hadassa Yeshurun proudly displays both Israel and Kurdistan flags as she sings in tribute to Kurdish fighters. 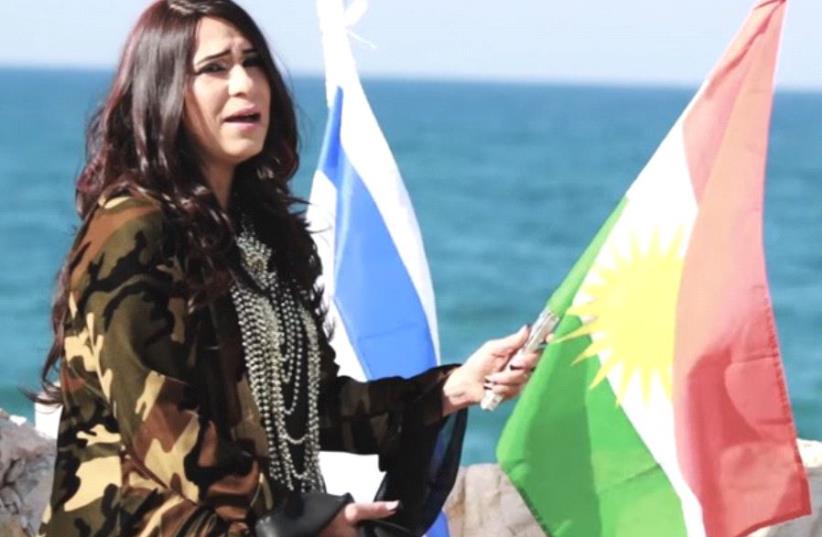 Hadassa Yeshurun holds Kurdish and Israeli flags in her music video
(photo credit: YOUTUBE SCREENSHOT)
Advertisement
A Kurdish-Israeli singer is gaining attention after releasing a song paying tribute to Peshmerga fighters battling against ISIS.Hadassa Yeshurun is an Israeli-born singer with deep Kurdish roots. Her father was born in Iraqi Kurdistan and met her mother while he was living in Oshnavieh, a Kurdish city in Iran. Her parents moved to Israel soon after marrying.While Yeshurun does not speak Kurdish, she chooses to sing in the language of her father's ancestry and supports the Kurdish people and Peshmerga forces.
Hadassa Yeshurun sings Peshmargayna
“I want to send a message that Peshmerga deserves more support as they fight evil on behalf of the world,” she said in an interview with Kurdistan24.Yeshurun's version of "Peshmargayna" was released on her official YouTube channel last week and is already making a splash in the Kurdish community. The iconic song was originally sung by famed Kurdish artist Tahseen Taha.The lyrics translate to "We’re all Peshmerga. We’ve all arrived, ready to sacrifice for our homeland."The music video was shot in Israel and features Yeshurun in what appears to be a Peshmerga uniform, waving both Israeli and Kurdish flags.There are roughly 200,000 Jews of Kurdish descent living in Israel today.