Women and the changing customs of Simhat Torah

‘Customs are not set in stone, and like the bonfires of yore, time will tell which practices will endure.’ 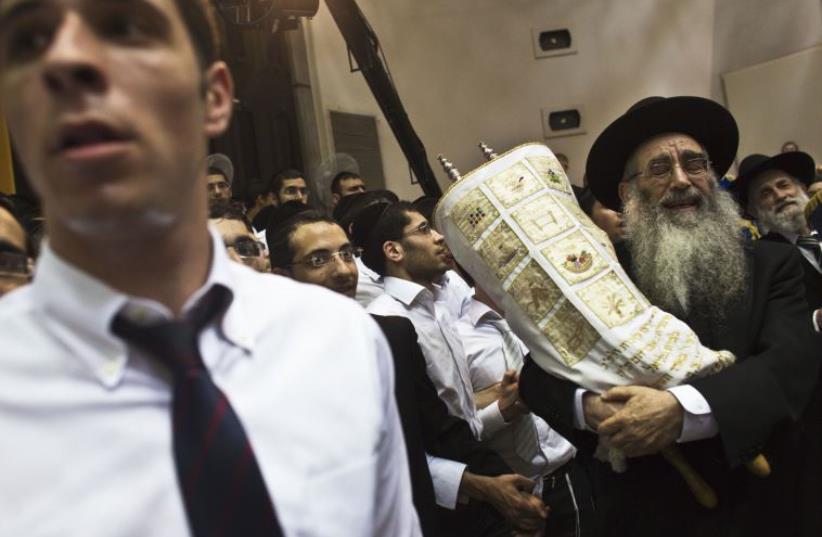 An Ultra-Orthodox Jewish Rabbi carries Torah scrolls as others dance during Simhat Torah celebrations in a synagogue in Bnei Brak
(photo credit: REUTERS)
Advertisement
In Spring Valley, New York, where I grew up, we children had a grand time on Simhat Torah, tying men’s tallitot (prayer shawls) to each other. We relished circling the synagogue after the Torah scrolls and the treats that followed. Later, as a teen in the women’s section, we girls watched the men following the Torah scrolls, but mostly danced.Our boisterous brothers developed what became the custom of the day. Immediately following kedusha of the Musaf prayer, the boys would lift the hazan (prayer leader) – who could not resist, as he was in the midst of his Shmoneh Esre prayer – and carry him up the stairs to the women’s gallery, where he continued leading the service until he finished the prayer and could retreat to the men’s section.After services, there the entire congregation marched, singing, house to house. It was a highlight of the year.Today, many women describe Simhat Torah as the least compelling holiday. I believe a look at the changing holiday customs will give us a relevant context for the place women are making for themselves in Simhat Torah today.WITH TWO exceptions, the Jewish festivals all commemorate God’s providential intervention on behalf of our people – Passover and Succot, the rabbinic holidays of Hanukka and Purim, and even Israel’s Independence Day and Jerusalem Day.The two non-conforming festivals are Shavuot and Simhat Torah, neither having a defining mitzva or commemoration of a divine miracle. Each is simply called atzeret, a day of festive assembly. Interestingly, both have evolved to celebrate our relationship with the Torah – Shavuot as the day of receiving the Torah, and Simhat Torah as the day of completing the Torah-reading cycle.Were we to ask the talmudic sages in the first centuries of the Common Era, or even Rashi in the 11th century, how they celebrate Simhat Torah, none would comprehend, as the term “Simhat Torah” had not yet become current. Following the custom in the Land of Israel, many communities practiced the triennial cycle of Torah-reading well into the Middle Ages. Thus, there was no annual celebration, and the final day of the Succot festival was simply “Atzeret.”Maimonides, in the 12th century, mentions the custom of completing the Torah once in three years as a dying custom. By the middle of the 14th century, at which time the Tur had become the most widely read code of Jewish law, the annual cycle had supplanted the triennial cycle, and the day of Torah completion came to be called Simhat Torah, “rejoicing upon the Torah.”The Tur mentions special customs for the day: The congregation would recite liturgical hymns upon the Torah scrolls, and those completing and beginning the Torah reading would pledge money for charity and invite friends to a festive meal in honor of the Torah.A contemporary of the Tur, Rabbi David Abudraham, also in Spain, adds that the new cycle of Torah reading begins immediately, lest it seem that Jews are celebrating the end of the onus of Torah reading. He, too, mentions the custom of the reader sponsoring a festive meal.A rather unusual custom seems to have evolved in 15th-century Germany, lasting for at least 200 years.Rabbi Yaakov Molin (Maharil), the preeminent German sage at the turn of the century, defends the custom of youths who, without permission, would dismantle neighbors’ succot for a bonfire on Simhat Torah. Apparently, boys would be boys, even back then. Two hundred and fifty years later, Rabbi Yehoshua Falk, encountering this custom in Germany, called upon the women of the community to barbecue their chickens in the bonfires so that they would have been kindled (by transferring fire) for the purpose of cooking the holiday meal, a permissible act on the festival.It’s not clear when the custom of lighting Simhat Torah bonfires died out, but the youths in my community developed their own Simhat Torah pranks beside the rejoicing of the adults. Juvenile and adult enthusiasts together helped create a communal savoring of the place of Torah in our lives.Simhat Torah customs have continued to evolve through today. Women have assumed an enhanced role in both ritual and Torah learning throughout the year, and are consequently seeking new ways of celebrating the holiday. These include women’s hakafot and special Torah study.Customs are not set in stone, and like the bonfires of yore, time will tell which practices will endure.But for growing ranks of women immersed in Torah, Simhat Torah has become a day of thanksgiving to the Almighty that the gates of higher Torah learning have opened before women.  Rabbanit Chana Henkin is the founder and dean of Nishmat – The Jeanie Schottenstein Center for Advanced Torah Study for Women.