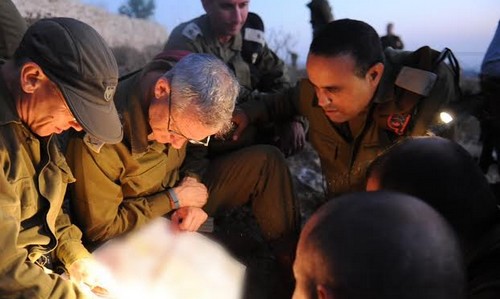 Security evaluations are that the teenagers were murdered a short time after being kidnapped.The searches leading to the actual discovery of the bodies were led by the Kfir Infantry Brigade, the elite Maglan unit, and civilian volunteers. The bodies had been buried in a field some 3 km. from the Palestinian town of Halhoul, north of Hebron.Video: Tovah Lazaroff The discovery came after the Shin Bet (Israel Security Agency) focused its efforts in the area over the past two days. The agency is continuing its intelligence efforts to track down the two suspected Hamas-affiliated kidnappers, Marwan Kawasme and Amar Abu Aysha, both of Hebron, as well as others who were involved.The Shin Bet launched a painstaking and complex process to piece together an intelligence puzzle that eventually led to the bodies. Information was gathered from a variety of sources, including its regional coordinators, signal intelligence, desk analysts and information obtained through the questioning of security suspects. This led to a gradual elimination of areas where it believed it would not find the bodies, until estimations honed in on the area near Halhoul.IDF Chief of Staff Lt.-Gen.Benny Gantz held a security evaluation with senior military brass following the discovery of the bodies. After the discovery, the bodies were transported to the Abu Kabir Forensic Institute in Tel Aviv for further examination.Outgoing President Shimon Peres said Israel is mourning “the untimely deaths” of the three kidnapped teens.“Alongside mourning, we remain determined to punish evil terrorists with a firm hand,” Peres said. “Our war on terrorism will only expand and will not be weakened so that murderous terrorism like this is able to raise its head.”Palestinian Authority President Mahmoud Abbas convened an emergency meeting of the Palestinian leadership in Ramallah on Monday night to discuss possible implications of the abduction and murder. Nabil Abu Rudaineh, spokesman for Abbas, said the meeting would “discuss the latest political developments and the repercussions of the recent events.”A large number of police personnel and security forces gathered at the Halhoul junction north of Hebron, near the area where the three were said to have been abducted.The area was declared a closed military zone. The homes of the suspected kidnappers were raided by security forces in Hebron, where clashes broke out between security forces and Palestinians.Since the start of the operation launched to locate the missing teens, the IDF has arrested 419 security suspects.Of these, 276 are Hamas members, including 56 who were released as part of the 2011 deal to obtain the return of kidnapped soldier Gilad Schalit. Twelve are considered to be leaders of the Islamist group.All told the IDF launched 39 brigade-strength raids and targeted 63 Hamas civilian bodies. Hamas radio and television media have been shut down, and restricted access has been put in place around areas of Hebron for the past 17 days. The IDF also searched 2,216 West Bank homes.Meanwhile, in Gaza, terrorists have fired some 40 rockets at Israel since last week, and the air force has responded with 13 waves of air strikes in response.In Washington, State Department spokeswoman Jen Psaki walked a thin line while briefing reporters on the development, urging restraint.“The kidnapping and, of course, any harm that has been done to these teenagers is a tragedy,” Psaki said.US law requires the government to inform next of kin should an American citizen be killed. One of the dead teens, Naftali Frenkel, held US citizenship.Ed Royce (R-California), chairman of the House Foreign Relations Committee, said the perpetrators must be “held accountable” for the act.“The brutal murder of these boys should leave the administration with no illusion that a Hamas-backed Palestinian government will be a partner for peace,” Royce said. “With these killings, the genocidal intent of Hamas has been laid bare yet again.”Khaled Abu Toameh, Michael Wilner in New York, and Jerusalem Post staff contributed to this report.