Mother of kidnapped Israeli teen speaks in Geneva to seek help for her son and 2 other abducted boys.

By TOVAH LAZAROFF
Racheli Fraenkel
(photo credit: screenshot)
Advertisement
Every child has the right to return home safely from school, Rachel Fraenkel told the United Nations Human Rights Council on Tuesday morning in Geneva, as she urged the international community to help rescue her son and two other teenagers who were kidnapped by Hamas earlier this month.She described the events of June 12, in which her son, Naftali, 16, along with Gil-Ad Shaer, 16, and Eyal Yifrah, 19, were abducted from a hitchhiking post in the Gush Etzion region of the West Bank as they made their way home from school.“My son texted me, said he was on his way home, and then he was gone. Every mother’s nightmare is waiting and waiting endlessly for her child to come home,” she told the UNHRC.However, a representative of the General Arab Women’s Federation who spoke after Fraenkel said in response, “Suffering is not measurable.If we would bring all the mothers of Palestinian children who have been abducted or killed by Israeli forces, there would be no place in this room. Nevertheless, over the past two weeks, the grievances of three Israeli families have been exploited to serve a political agenda much deeper than that, which is justifying and [consolidating] the illegal occupation of Palestine.”Fraenkel spoke at the tail end of a two-hour debate, in which the PLO, Syria and 35 other countries censured Israeli actions against Palestinians and called for it to end its “occupation” of the West Bank.Only a few countries briefly mentioned the kidnapping. A number of them, including Syria, called on Israel to return the Golan Heights in spite of the deadly Syrian civil war.Country representatives and pro-Palestinian NGOs equated the kidnapping with Israel’s policy of detaining Palestinians and with the Palestinian deaths that the IDF caused during military operations.PLO Ambassador to the UNHRC Ibrahim Khraishi accused Israel of “collectively punishing” the Palestinian people since the kidnapping, referring to Israel’s campaign against Hamas in the West Bank. The IDF has arrested over 350 Palestinians in the last 12 days and searched hundreds of homes and shops in the Hebron area.“Israel has started a very suppressive, brutal campaign that led to a closure of the West Bank, the detentions of almost 500 Palestinians, and the killing of six civilians,” Khraishi said.The UNHRC holds such a debate three times a year, during each of its month-long sessions, including at this 26th session, which ends on June 27.The UNHRC has a mandate to dedicate Agenda Item 7 at every session to Israeli activities against Palestinians. Israel is the only country the UNHRC is mandated to debate at each session.In the last year, Israel, the US and the EU have boycotted the Agenda Item 7 debate. On Tuesday, the UNHRC’s call “to give the floor to the distinguished representative of Israel” was met with silence.“Absent,” the moderator said, and called on Syria to speak. This left Fraenkel as one of the lone voices in support of Israel during the entire debate. She sat in the back, wearing a green shirt, her hair tucked under a green scarf.Fraenkel read from a prepared statement as she tried to humanize the suffering of the three families. She told diplomats something personal about each of the teens.“My son Naftali... loves to play guitar and basketball. He is a good student and a good boy, a combination of serious and fun. Eyal loves to play sports and cook. Gil-Ad is an amateur pastry chef and loves movies,” Fraenkel said.She thanked those members of the international community who had spoken out in support of the teens.“We wish to express our profound gratitude for the waves of prayers and support and positive energy pouring in from around the world,” she said. “I wish to thank the UN Secretary- General [Ban Ki-moon] for condemning the abduction of our boys and expressing his solidarity with the families and calling for their immediate return. I thank the International Red Cross for stating clearly that international humanitarian law prohibits the taking of hostages and for demanding the immediate and unconditional release of our boys.”Still, she said, she had come together with the mothers of the two other teens, Bat-Galim Shaer and Iris Yifrah to urge the international community to do more to bring their sons home.“Much more can be done and should be done by so many,” Fraenkel said.That was why the three mothers had come before the UN and before the world, she said – to ask everyone to do whatever they could to bring the boys back. 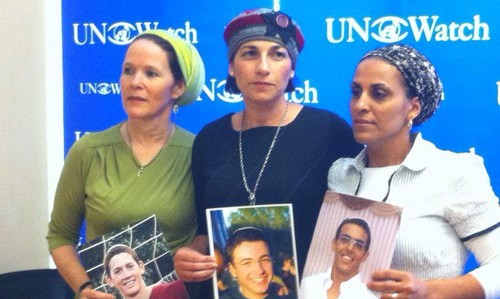 “It is wrong to take children, innocent boys and girls, and use them as instruments of any struggle. It is cruel. This council is charged with protecting human rights. I wish to ask, doesn’t every child have the right to come home safely from school?” she said.“We just want them back at home, in their beds. We just want to hug them again,” she added. Fraenkel was able to speak because the non-governmental group UN Watch allowed her to use its scheduled time at the session. UN Watch is a registered NGO at the UNHRC and therefore has a right to speak at its sessions.The group also funded Fraenkel’s trip to Geneva, as well as that of the other two mothers. 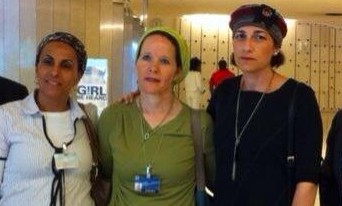 Since the kidnapping, Fraenkel has taken the lead in speaking on behalf of the families, particularly when it comes to the international community. She and Naftali both hold dual Israeli-US citizenship. While in Geneva, the three mothers also met with UN Deputy High Commissioner for Human Rights Flavia Pansieri. They flew back to Israel later in the day.Knesset speaker Yuli Edelstein said the way the UNHRC had ignored the plight of the three teenagers had left him speechless.Deputy Defense Minister Danny Danon said he could only imagine what the Russian army would have done if three of its country’s citizens had been kidnapped.“The UNHRC cares more for the rights of terrorists than for Israeli teens who were kidnapped on their way home from school,” Danon said.