Ya'alon: We are not scaling back our operations in the West Bank

IDF Chief of Staff Gantz says military continuing to exert maximum efforts in searches; "we believe that we will eventually find the teenagers," he says.

By YAAKOV LAPPIN
Defense Minister Moshe Ya'alon tours the border with Lebanon, June 24, 2014.
(photo credit: DEFENSE MINISTRY/ARIEL HERMONI)
Advertisement
The IDF is keeping up levels of intelligence and operational searches for the abducted Israeli youths in Judea and Samaria, Defense Minister Moshe Ya’alon said Tuesday during a tour of the Lebanese border.Raids against Hamas members have dropped in recent days from hundreds per night to just a few, as this part of the operation has exhausted itself, Ya’alon said, echoing comments made by senior army officers – who said that arrests of Hamas members would drop significantly.“Without a doubt, this mission [of finding the missing youths] continues to be the main one. Even if I’m in the North here today, my mind is in the Judea and Samaria region, and my heart is with the families,” Ya’alon said.“From our perspective, this continues to be the No. 1 mission, in which we are investing the best of our resources.”He added that it was “only a matter of time until we get to the kidnappers and the kidnapped youths,” and he called for patience. “We are in the right direction. We will eventually solve the mystery. And I hope we’ll succeed in bringing back the abducted youths safely.”Addressing the reduction of the IDF’s presence in Hebron, Ya’alon said: “In Hebron, as in all other places in Judea and Samaria, we won’t see soldiers everywhere. Troops are concentrated in focused activities, in intelligence and searches according to an analysis of the ground. We did not place a full closure on Hebron from the start of the incident, but Hebron is surrounded. Its residents aren’t leaving it for work [outside of the city].”Some civilian movement is allowed in and out of the city, Ya’alon said, but not without military supervision.Ya’alon said he continued to oppose the idea of releasing security prisoners in deals with terrorist organizations, saying this “encourages the next kidnappings.” 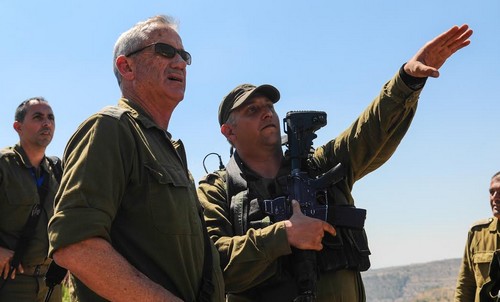 IDF Chief of Staff Lt.-Gen. Benny Gantz said the IDF was continuing to exert maximum efforts in searches.“We are relying on intelligence, and we believe that we will eventually find the teenagers,” Gantz said. The chief of staff said the IDF continued to be on high alert in other areas, such as Gaza and the North.