Fighting terrorists who move around in ambulances

Hamas is an expert at embedding itself in the midst of the Palestinian civilian population and using it as human shields, to seek immunity from the army. 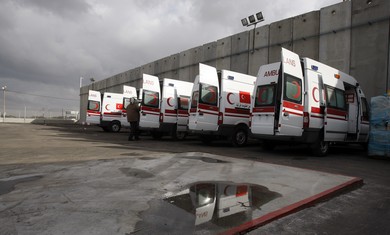 Israel’s decision to launch a ground offensive provides it with an important advantage in the war against Hamas.A ground maneuver gives the IDF the ability to move in enemy territory, destroying targets from up close, while still deploying firepower from the air throughout.It is a concept as old as Israeli military history. Today, however, Hamas represents the asymmetrical enemy that defines combat in our times.Hamas is an expert at embedding itself in the midst of the Palestinian civilian population and using it as human shields, to seek immunity from the army.In recent days, IDF sources reported spotting Hamas gunmen boarding ambulances in Gaza filled with children. Hamas urged residents of northern Gaza to remain in their homes, and provide cover for its concentration of rocket launch squads in that area.These tactics are designed to provide the terrorist organization with protection from the IDF.They are the same tactics that have prevented the air force from destroying all of Hamas’s rocket infrastructure, hidden deep under residential buildings, or targeting its leadership, which is hiding under the Shifa hospital in Gaza City.Hamas spread out its assets across Gaza, and there is no one center of gravity for the IDF to target.The military operation is complex and long, and the IDF’s focus on destroying tunnels is only the first stage of the ground maneuver.Despite their tactics, Hamas and Islamic Jihad are in trouble. They have lost more than half of their rockets supply – some 40 percent have been destroyed in air force attacks and another 1,700 rockets have been fired at Israel. Many rockets remain, but the supply is beginning to dwindle.Military sources said significant gains have already been made on the ground. Rockets continue to be destroyed from the air, as are enemy command and control centers.On the defensive front, Iron Dome continues to frustrate Hamas and Islamic Jihad’s attempt to inflict mass carnage and large numbers of casualties in Israeli cities.Hamas invested years in building up its offensive assets; tunnels, the rockets arsenal, and command and control centers. Yet efforts to activate these have mostly ended in failure.Nevertheless, Hamas will continue to fire projectiles at Israeli cities, and try to send murder squads into Israel through tunnels, before the IDF discovers them.It was Hezbollah that pioneered such tactics 20 years ago.The Lebanese Shi’ite organization spent years building the model of asymmetric war that Hamas relies on in Gaza today.Israeli security officials argued that this is the first time the defense establishment found an effective formula for dealing with it – offensively and defensively.These efforts are backed by enhanced intelligence, and precision guided munitions, which represent new capabilities for Israel.The security challenges of the previous decade, in which waves of Palestinian suicide bombers from West Bank cities left more than 1,200 Israelis dead, were significantly more severe, according to these officials.Then, as now, it took some time for Israel to come up with an effective solution to the threat. Yet by 2005, the suicide bombing rampage had been extinguished.Today, the officials feel, Israel is on its way to eliminating rocket terrorism as an effective tool for terrorist organizations.Hezbollah, a far larger and better armed enemy, is watching the battle unfolding in the Strip closely. Its rocket arsenal is 10 times larger than that in Gaza, but the IDF is also able to hit 10 times as many targets as it did in Gaza.Hezbollah also constructed subterranean terrorist assets in built up areas. Now, officials said, Hezbollah will be forced to reconsider its war doctrine.Additionally, they said that the intelligence and offensive capabilities will most likely deter it from getting involved in a conflict with Israel.