Analysis: Victory through a truce?

The notion Israel can rid the world of Hamas is as unrealistic as the desire of Hamas to see a Palestinian state rise on the ruins of Israel. 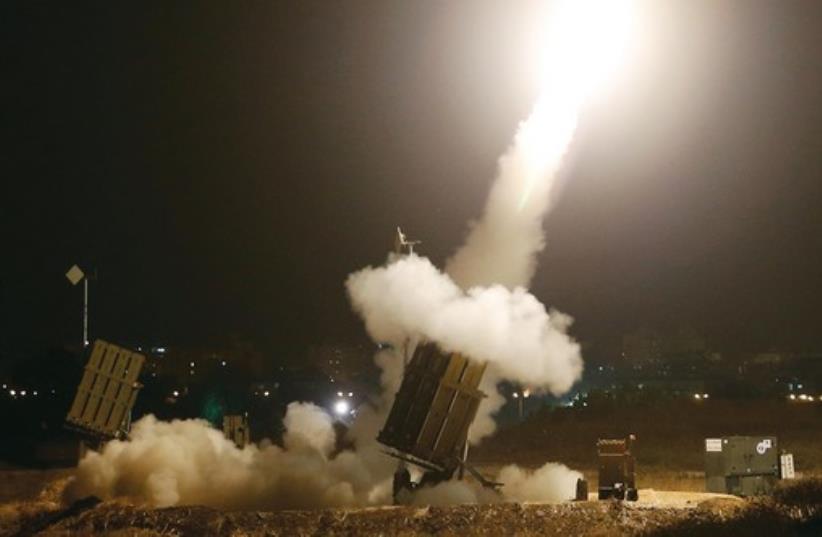 An iron dome launches rockets to intercept incoming rockets from Gaza on Tuesday.
(photo credit: REUTERS)
Advertisement
As the fifth day of Operation Protective Edge wound down Saturday night, with Hamas fulfilling its early evening vow to rain down rockets on Greater Tel Aviv at 9 in the evening, the options Israel and the IDF possess aren’t any clearer than they were on day one.Despite Hamas’s macho threats and salvos of rockets, the effect on life in Israel has been minimal. The Iron Dome system has proven to be amazingly effective at protecting the country’s citizens, and as a result there’s a lopsided casualty tally on the Gaza side, where Hamas has called on citizens to stand their ground instead of seeking shelter. Israel’s measured response to the Hamas offensive has prevented the Palestinian civilian death toll, as painfully high as it is, from being much more extensive.With IDF troops amassed and waiting the order to begin a ground invasion of Gaza, there are signs of various Arab-initiated efforts for a cease-fire. Which way the conflict will go in the next couple of days depends on the goals of our political leaders.Is it realistic to think a ground campaign in Gaza will result in the toppling of the Hamas leadership? The IDF would have to level huge tracts, and even then it would require months of hunts in tunnels, high casualties on both sides and the specter of Israel once again being mired in Gaza without an exit plan.Our military echelon has stated repeatedly that Hamas has been gravely weakened over the past week by the IAF’s strikes. If the option of a cease-fire is on the table that will stop the continued rocket attacks – not just in the center of the country, but in the South, where they have never really stopped – then it’s an option Israel needs to take seriously.Aside from some property damage, trauma and a few injuries, Israel has remained unscathed by the Hamas attacks so far. Can we live with this kind of outburst every year or every few months? If it means saving countless lives of IDF soldiers and a long, bloody campaign in Gaza, then the answer is yes.The notion Israel can rid the world of Hamas is as unrealistic as the desire of Hamas to see a Palestinian state rise on the ruins of Israel. The best that can be hoped for is a weakened Hamas becoming marginalized, the people of Gaza demanding true leadership, and moderate Palestinians uniting the people of Gaza and the West Bank and returning to negotiations with Israel.As unlikely as that scenario might be, striving for it is still preferable to the inevitable mounting casualties and unachievable goals of a long ground offensive.