Direct damage claims from rockets down 75% from Pillar of Defense

Majority of claims were damage to buildings and vehicles; Agricultural damage accounts for 17 of the claims. 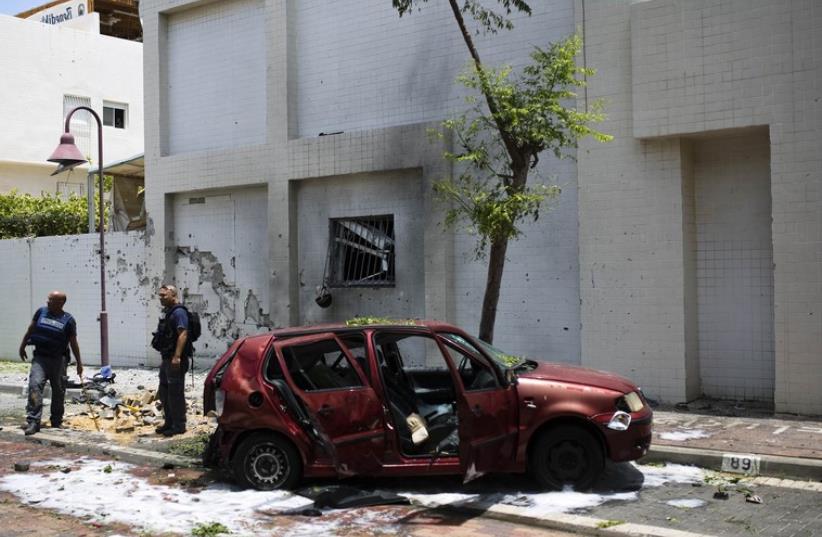 Israeli police survey the scene after a rocket fired from Gaza landed in Ashdod July 14, 2014.
(photo credit: REUTERS)
Advertisement
Reports of direct rocket-related damage throughout Operation Protective Edge have amounted to a mere fraction of those reported in the last major conflagration with Hamas, 2012’s Pillar of Defense.According to the Israel Tax Authority, citizens filed 662 damage claims during the first week of the conflict. The eight-day Pillar of Defense produced roughly 4,000 claims, nearly six-fold.Another 100 claims were filed in the days before Protective Edge began, which were not included in Tuesday’s figures.Based on comparable data, there was a 75 percent reduction in the number of claims, a fact the Tax Authority attributes to greater numbers of Iron Dome batteries and their increased efficiency.Even if a cease-fire takes hold, the number of claims is expected to grow in the days and weeks following hostilities.“There are families who went abroad for summer vacation, families who went to Eilat. They’ll come back and only then see if there was some level of damage,” a spokesman at the authority said. Additional claims are expected as people learn that they are eligible for compensation from rocket damage.Approximately 15% of the claims filed for Pillar of Defense came in the operation’s aftermath.The majority of damage was reported in Ashdod and the towns of the “Gaza envelope.”Each accounted for about a third of all damage reports (271 and 221 claims, respectively). The remaining claims came from Beersheba (84), Tel Aviv, and the Center (58), Jerusalem (22), and Haifa (6).Similarly, the great majority of claims (417, nearly twothirds) were of damage to buildings and (228, about one third) to vehicles. Agricultural damage accounted for just 17 claims.The authority does not yet have an estimate for the total cost of the damage, as it devoted resources to sending teams to check claims in the field as they occurred. The first 100 claims added up to about NIS 10 million, while the next 120, which came during the first two days of the operation, added up to about NIS 5m.Assuming that the average cost per claim remained consistent, the total direct damage through Monday night would have amounted to nearly NIS 52. The overall economic impact does not solely consist of compensating for direct damage, but also military expenditures and a slowdown to businesses throughout the country.“It is still too early to tell the total economic cost of Operation Protective Edge, and the impact on the economy is not over yet,” said Ofer Klein, who heads the economic division at Harel Finance.He estimated that the economic impact will be on par with previous operations.Tourism, in particular, is hard hit, and only recovers after four or five months, he said. In the 2006 Lebanon War, it declined 53%, and in 2008’s Cast Lead it decreased 39%, while Pillar of Defense in 2012 saw a 7% drop, though that did not take place during a peak tourist season.Because rockets affected a larger portion of the country in this operation, it was more likely to slow down consumer spending, which accounts for 56% of Israel’s GDP.In another step to help ease the economic burden imposed by the conflict, on Tuesday Finance Minister Yair Lapid instructed that people paying mortgages obtained through the Housing Loans Law can, until the end of August, request a twomonth extension in payments from their banks.Evictions and foreclosures that had been scheduled would be postponed until after the operation.