Erdogan states Turkey-Israel ties will not be normalized as long as Israel continues to "kill innocent children and continue its operations in Gaza." 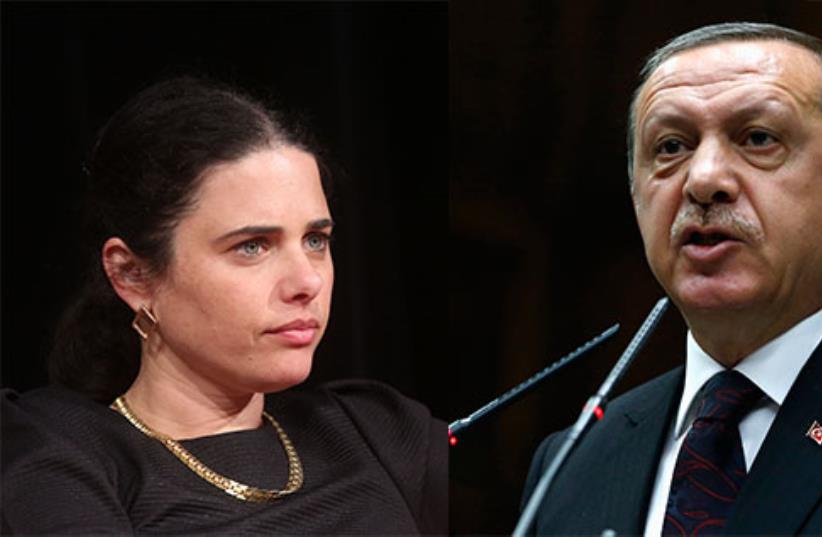 Ayelet Shaked and Erdogan
(photo credit: REUTERS,MARC ISRAEL SELLEM/THE JERUSALEM POST)
Advertisement
Turkish Prime Minister Recep Tayyip Erdogan compared Bayit Yehudi faction chairwoman Ayelet Shaked to Hitler on Tuesday, in remarks criticizing Israel’s actions against terrorists in the Gaza Strip.Erdogan gave a fiery anti-Israel speech in which he said Ankara will not normalize ties with Israel as long as Israel continues to “kill innocent children and continue its operations in Gaza.”The Turkish prime minister referred to a female MK who said “all Palestinians are our enemies.“This mentality is no different to that of Hitler,” the Istanbul-based daily Hurriyet reported Erdogan as saying.“If these words were said by a Palestinian, the whole world would have denounced it,” he continued.Erdogan’s supposed quote of Shaked referred to an article by now-deceased Makor Rishon editor Eli Elitzur from 2002, at the height of the second intifada, which the Bayit Yehudi MK posted on her Facebook wall on July 1.“The Palestinian people declared war on us, and we must fight back. Not an operation, not low-intensity, not destroying terror infrastructure... This is a war between two nations. Who is the enemy? The Palestinian people. Why? Ask them, they started,” Elitzur wrote.When asked to comment on Erdogan’s statement, Shaked’s spokeswoman Tal Benesh quipped that this is “the end to all-inclusive vacations,” referring to the resorts many Israelis visit in Turkey.