Hamas searching for a way out of conflict, Israeli security sources believe 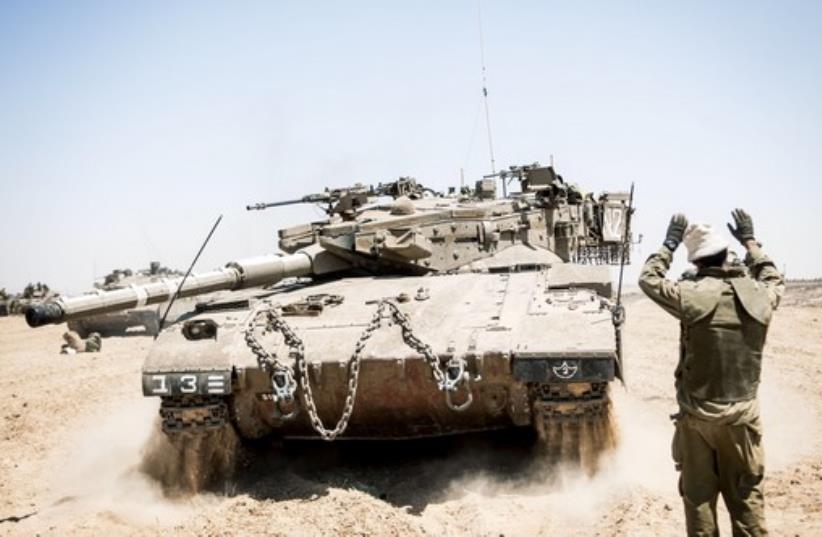 IDF at Gaza Strip
(photo credit: IDF)
Advertisement
Hamas is in distress, and is searching for a way out of the conflict, according to evaluations by senior Israeli security sources.Hamas has sustained a "significant blow," one senior officer said, speaking on Monday, adding that his assessment is based on knowledge of what Hamas leaders are saying to one another.There are three figures who have a say in Hamas's leadership: Muhammad Deif, head of the Al Kassam Brigades, Ismael Haniyah, the head of Hamas's political wing in Gaza, and Khaled Mashal, head of Hamas's politburo overseas."They're looking for a way out," the senior source said, adding that every attempt by Hamas to achieve a "victory picture" has been a failure thus far.The IDF has destroyed around a third of Hamas's rocket arsenal, half of its rocket production facilities, as well as a large portion of homes used as command and control centers by Hamas brigade and battalion commanders. Hundreds of storage facilities hidden underground have also been destroyed.While the IDF's firepower has been highly effective, Hamas and Islamic Jihad's firepower has been rendered nearly totally ineffective due the Iron Dome air defense system. Hundreds of planned air strikes did not receive the green light from IDF brass, due to the risk they posed to Palestinian noncombatants, meaning that a large number of vital Hamas operational targets were left untouched by Israel. Military sources explained that there are two main stages in this type of asymmetrical conflict in which a terror organization uses built-up areas as their bases. The first part, where Israel is still at, is based on the goal of achieving deterrence, and the second part is aimed at achieving full military victory, defined by the IDF as removing all of Hamas's offensive capabilities in the Gaza Strip. The first stage is based on the use of intelligence-based aerial firepower, and the second involves a ground maneuver combined with firepower. The ground maneuver itself is made up of multiple stages, and at its most advanced stage, if reached, the IDF would take full control of the Gaza Strip and proceed to destroy all of Hamas's and Islamic Jihad's rocket arsenal and military capabilities in a prolonged operation. In the first stage, that of deterrence, where the operation is currently located, Hamas has the option to signal to Israel that it has been deterred, that it is prepared for a ceasefire based on reasonable terms that include a cessation of rocket fire on Israeli civilians, thereby bringing the conflict to a close. Once the government orders the IDF to enter the second stage, Hamas loses an exit option, and Israel assumes control over when the conflict ends. Hamas's decision on when to signal that it wishes to withdraw from the fighting is fully shaped by the IDF's effectiveness.Hamas has also failed to set the West Bank alight, the source said, and the Arab world has given it a cold shoulder. There are growing voices in Gaza asking Hamas "why it brought this on us," the source continued, and these voices have grown louder in the past 48 hours. "These voices have expressed an objection to Hamas leading Israel to a ground maneuver," he added.The asymmetrical warfare currently underway in Gaza, in which Israel is targeting a guerrilla-terrorist organization that converts homes, apartment buildings and mosques into operational centers, is not only about Gaza, the source stressed. "This is what the Third Lebanon War will look like" in many ways, he added."Increasingly, Hamas is understanding within itself the severity of the damage that it sustained. We expect that they will try to end this," the source said.All of the current target database compiled by the IDF's Military Intelligence was assembled between November 2012 - the end of Operation Pillar of Defense - and now, the source added. "With all humility, I can say that the IDF has never had better intelligence," he said.