Move comes after the IDF called up 40,000 reserves to replace conscripts in the West Bank, and began building up a ground offensive force on the Gazan border. 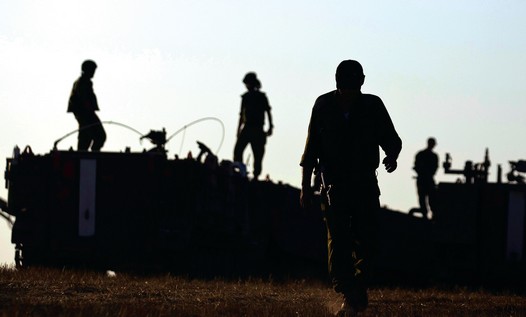 The IDF has requested from Palestinians in the Gaza Strip who live in a number of areas near the Israeli border to begin vacating their homes.The move comes after the IDF called up 40,000 reserves to replace conscripts in the West Bank, and began building up a ground offensive force on the Gazan border.Thus far, since Operation Protective Edge began on Tuesday, the IDF has targeted terror infrastructure in Gaza solely from the air. However rocket fire from Gaza continued to hit Israel throughout Thursday as some within Israel called for a ground operation.The IDF struck 60 targets across Gaza between Thursday morning and afternoon, bringing the total number of targets hit by the military to some 800 since the start of the operation on Monday night to extinguish Hamas rocket fire on Israel. Targets included buildings used by the Hamas leadership, the homes of senior Hamas members, tunnels, underground launchers, communications infrastructure, military bases, and weapons caches.The IAF carried out dozens of air strikes, and Israel Navy missile boats fired on coastal targets that housed weapons, as well as Hamas military posts. The IDF and Shin Bet intelligence agency joint targeted the homes of a series of Hamas leaders that were used as command and control centers by the military wing of Hamas. The homes belonged to, among others, Uval Janadiya, a deputy commander of Hamas forces in Saja'yia, who oversaw attacks on the IDF, and took part in fighting in Operation Pillar of Defense in 2012, the IDF said. The home of Arafat Abu-Abdullah, an Islamic Jihad commander in central Gaza, was also hit. Abu-Abdullah commanded over Islamic Jihad terrorist activity from central Gaza, including rocket fire on Israel in recent days. Mahdi Kuara, a Hamas operative from Khan Younes in southern Gaza, and Nisim Abu Ajaina, a Hamas commander from Beit Lahia in northern Gaza, responsible for building Hamas's military power  and the digging of attack tunnels, both lost their homes in the air strikes. The home of Shadi Saleh Rajab, a Hamas member responsible for rocket fire from northern Gaza, was bombed as well. "The IDF has struck and will continue to seriously damage the Hamas terror organization, its infrastructure, and any element involved in terror attacks on the state of Israel and its citizens," the IDF said.

The IAF struck three Islamic Jihad members in central Gaza on Thursday. The IDF named them as Mahmoud Walud, Hazam Ba'alusha, and Ala'a Abd Alabni. All three were killed in the strike. Alanbi was responsible for Islamic Jihad's rocket launching cells in northern Gaza, and fire on Israel in recent days, including long-range projectiles.
Advertisement
Subscribe for our daily newsletter